10 Reasons Why Your Boundaries Don’t Work 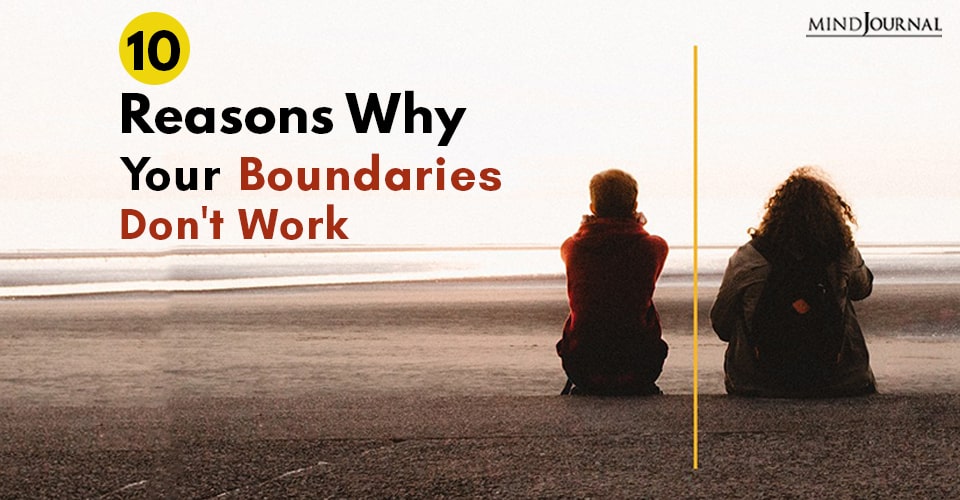 Has setting limits not worked? Despite your efforts, are your boundaries often ignored? It’s frustrating, but it’s not always the other person’s fault. Here’s why and what to do.

There are several reasons why boundaries don’t work. As I wrote in Codependency for Dummies and How to Speak Your Mind – Become Assertive and Set Limits, assertiveness is a prerequisite to setting effective boundaries, and it isn’t easy.

“Setting boundaries is an advanced form of assertiveness. It involves risk and entails taking a position about who you are, what you’re willing to do or not do, and how you want to be treated and respected in your relationships. It first requires awareness of your values, feelings, and needs, plus some practice in making “I” statements about them.” From How to Speak Your Mind – Become Assertive and Set Limits.

Why Assertiveness is Difficult

Learning assertiveness takes self-awareness and practice. Often due to underlying shame and low self-esteem, codependents, especially, find this difficult, because:

Instead of being assertive, codependents communicate dysfunctionally, as they learned from their parents, often being passive, nagging, aggressive, or critical, or blaming. If you nag, attack, blame or criticize someone, he or she will react defensively or tune you out. Assertiveness can be learned with practice.

Related: 10 Great Things That Happen When You Set Boundaries

If you’ve repeatedly communicated your boundaries assertively and it’s not working, it’s likely because:

1. Your tone is not firm or is blaming or critical.

2. There’s no consequence for violating your boundary.

3. You back down when challenged with reason, anger, threats, name-calling, the silent treatment, or responses such as:

4. You make threats too frightening or unrealistic to carry out, such as “If you do that again, I’ll leave.”

5. You don’t sufficiently appreciate the importance of your needs and values.

6. You don’t exercise consequences on a consistent basis – every time your boundary is violated.

7. You back down because you sympathize with the other person’s pain, and you place his or her feelings and needs above your own.

8. You’re insisting that someone else change. Consequences aren’t meant to punish someone or change his or her behavior, but rather require you to change your behavior.

9. You don’t have a support system to reinforce your new behavior.

10. Your words and actions are contradictory. Actions speak louder. Actions that reward someone for violating your limit prove that you aren’t serious. Here are some examples: