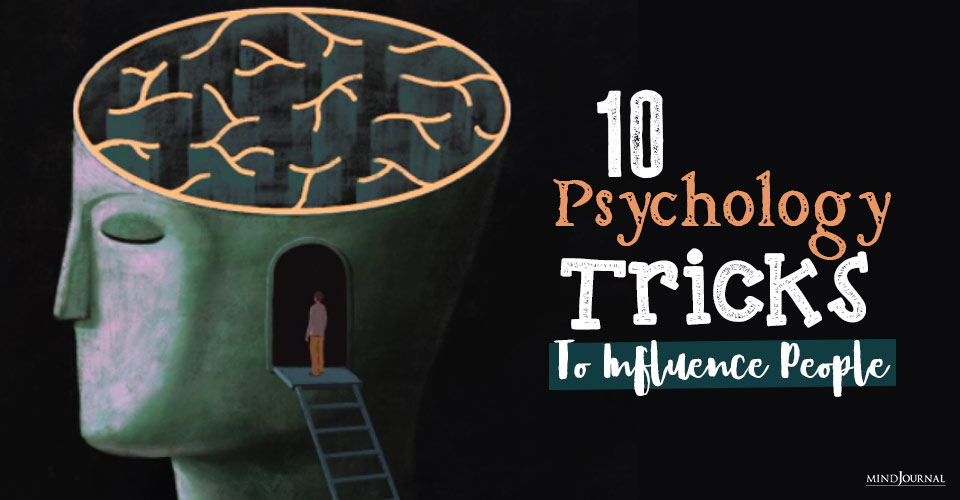 Before you start forming ideas by reading the word ‘tricks’, let me tell you that the methods discussed here aren’t wrongful ways of influencing people- don’t think them to be related to the “dark arts”! All these psychology tricks included here are not harmful in any way nor will they damage a person’s self-esteem.

These are just a few cool psychology tricks to win people over through positive influence, and not by hurting someone or being a jerk! So, how to influence people? Rather, how to win friends and influence people? Let’s find that out, shall we?

Trick: Get the person you want to win over to do you a favor— this is called the Benjamin Franklin effect.

As the story goes, Benjamin Franklin intended to befriend a man who disliked him. He asked the man if he could borrow a rare book and when he agreed to lend the book to Franklin, he offered his heartfelt thanks. Following this, the person who never even wanted to talk with Franklin formed a friendship with him.

According to Benjamin Franklin, a person who has done an act of kindness for you once will be more willing to do it another time, compared to a person you have obliged in some way.

Researchers decided to put this theory to the test. Scientists discovered that a researcher who asked people for a personal favor was rated favorably by them in comparison to other groups of people.

Although it seems counterintuitive- it’s a well-established theory. When someone helps you, they consider you as a person worthy of doing the favor and conclude that you are likable.

9. Aim Higher Than Your Real Goal

Trick: In your first attempt, ask for a lot more than you actually want, and scale it down the next time.

Known as the door-in-the-face (DITF) technique, this is one of those psychological tricks to influence people that works by making a ridiculous and impossible request in your first attempt, which obviously the person being asked will reject. Then after a while, you again make a request, this time much more feasible, basically ask for the thing you actually wanted.

This trick may feel counter-intuitive, but the way this works in your favor is that the person being requested most likely feels bad that they had to refuse your first request, even though it was an impossible one to keep; so the next time you request for something that’s doable, they feel compelled to help you.

Trick: Use a person’s name, or a particular address, depending on the situation.

According to writer Dale Carnegie, famous for his book How to Win Friends and Influence People, using the person’s name you want to win over is crucial. He explains that a person’s name is the best sounding word to him/her in any language.

Our names are the key part of who we are, and hearing it spoken out loud validates our identity. Hence, we are more likely to have positive feelings about the person who validated our existence.

Think of it like a self-fulfilling prophecy– where you expect something and it comes true simply because you believe that it will and your behavior aligns with what you want.

This principle can be used to influence others too. When you start referring to someone by a particular name, with time, they start thinking of themselves to be that.

Simple applications of this principle include addressing an acquaintance you wish to be more friendly with as a “friend” whenever you interact with them or calling someone you wish to work under “boss”. However, be careful because this approach can come across as very cheesy.