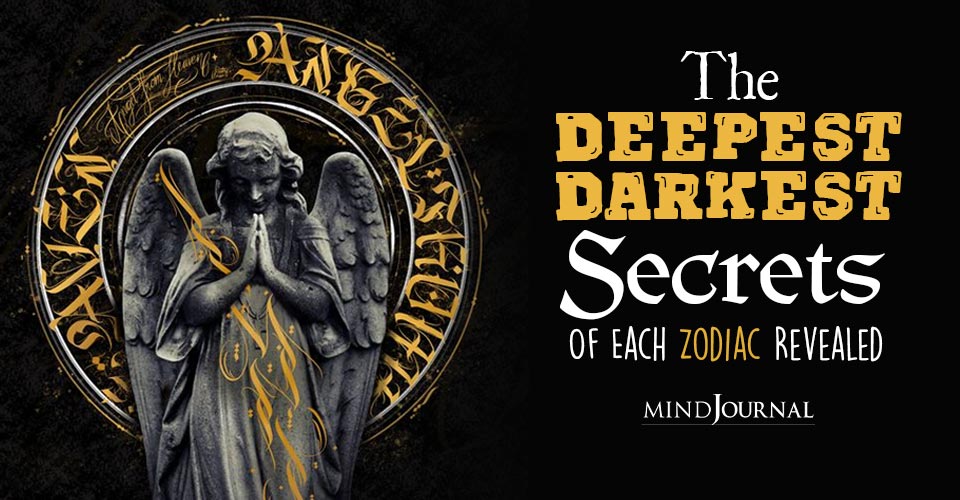 Do you want to find out the deepest darkest zodiac secrets? You have come to the right place then!

Do you sometimes wonder about all the surprising things you would find if you rummaged through the depths of a person’s soul, perhaps your spouse or a dear friend?

If you want to dig up deep, dark, and hidden secrets about someone, you have come to the right place because astrology can give you all the answers about the dark sides of each zodiac sign.

All the zodiac signs have secrets that don’t really put them in the best light. But it’s important to find out those well-kept secrets if you want to know a person inside out.

So without further ado, let’s dive into the deepest darkest secrets of zodiacs!

Here’re the deepest and darkest secrets of each zodiac sign, revealed for you!

For all the boldness and tough looks on the outside, they are actually very soft and emotional deep down. Aries secretly crave big doses of love and attention. They crave to be surrounded by loved ones always, but they are too shy to admit that.

They hold back their natural expressions of love unless they feel very secure in a relationship because they are scared that others might play with their feelings.

Read also Aries Personality: 15 Things You Need To Know About The Ram Sign

Taureans are proud of their appearance and they firmly believe that they are ahead of everyone else in the looks department. Put them in a room full of stunning supermodels, they’ll still have an air about them as if they are the most gorgeous people in the room!

Taureans have trust issues. They are insecure and distrustful of others, which is most likely an effect of their unhealthy past experiences. But once a Taurus finds the person they want to spend their life with, they will give them everything, including their precious trust.

Read Also 10 Secrets About Taurus You Probably Know Nothing About

When it comes to relationships, Geminis lose interest easily and dump their partners for no good reason at all.

One of the darkest secrets of this zodiac is that they blame their partners for crimes like not texting/calling back, but in reality, it is something very superficial that made the flighty Geminis break up.

Although they are jolly and talkative, they aren’t really what you call an open book. In fact, they rarely show their true self to people.

That’s because Geminis are extra cautious when it comes to making close friends they can rely on. There are only a handful of people whom they trust. They fear that if they open up too much, people will use their insecurities against them.

They dislike their friends as they think they are better than all of them. But they would not cut ties with them, although they have thought about that a number of times.

Maybe they get some secret satisfaction from complaining about their friends, that’s why they will hate them but still want them in their life.

Cancers are vulnerable souls. To protect themselves from being played and hurt, they hide their true feelings from the world. They want the world to perceive them as well sorted out, and they are ready to do almost anything to protect that image.

The truth is that Leos are jealous of almost everyone. Their jealousy is easily triggered, and at that point, all they can think about is how to get their hands on the things they envy about the other person.

Leos love being in the spotlight. They crave to be the center of attention. Even if they don’t express it, they can’t stand the thought of sharing the glory of the limelight with someone else!

Virgos may appreciate their friends with kind praises, but the truth is they never mean a word genuinely. They give fake compliments for the sake of being courteous, but deep down, they probably think just the opposite.

Virgos think too much. It may not appear that way, but a plethora of thoughts are constantly running through their minds. Overthinking leads to unwarranted assumptions. In reality, most of the time, things aren’t as bad as they are inside their overactive imagination. They should think less and just go with the flow!

The world sees it as friendliness and natural charm, but they can be a cold-hearted manipulator. The smooth-talking Libra will talk you into things for the sake of their personal benefit. And the worst part is that they don’t even feel guilty about it, rather they are proud of their manipulation skills.

They don’t express their feelings but hope people understand how badly being alone scares them. They always need to be in the company of friends and family or have that special person by their side to support them.

Scorpios are dark people. If you hurt them, even by mistake, they won’t rest until they have their revenge on you. Scorpios have too many dark secrets, so can’t really pinpoint a single one. All I can say is that if you see a Scorpion being moody, just stay miles away from them.

This zodiac is full of secrets. With their poker face and aloof nature, they are really skilled at being secretive. They have their own ways of knowing what’s going on in other people’s lives, but hardly anyone knows what’s happening in theirs.

They might have actually robbed a person in their life! We know they didn’t do it out of need, but just to see how it feels.

Sagittarius just wants to be a free bird. They love their freedom and when it comes to committing to something, it gives them the heebie-jeebies.

They love their partner unconditionally, but when the partner talks about putting a label on the relationship, the flight is Saggi’s spontaneous reaction. They need their own sweet time to make up their mind.

Forgive and forget is just not the Capricorn mantra. They have long memories and they mark a person who has wronged them in any way. They will either make that person’s life miserable through constant sarcastic remarks or expel them from their life altogether.

They do their best to avoid situations that might bring out their weaknesses. Capricorns want to appear strong and perfect in the eyes of the world, so they try to hide parts of their personality that they feel are flawed. Seriously, we all have imperfections, and being authentic is more valuable than being flawless.

They have flirted with all their friend’s partners. They say that it was just some harmless bantering.

Aquarius feels disconnected and out of place when surrounded by a gang of friends. They do make an effort to connect with others, but they get carried away by their own ideas very easily.

They make up stories just to appeal to other people’s sympathy. They like the attention that their sob stories get them and can never pass an opportunity to get some free consolation.

Pisces is a delicate heart wrapped up in a powerful personality. They are the kind of people that don’t let people in quickly. But it’s okay if they let their guard down sometimes.

I’m sure the deepest darkest secrets of zodiac signs revealed in this article are spot-on and accurate. Do you agree? Comment down below!

Also read What Is Spirituality?