5 Reasons Being Yourself Is The Best Way To Find Love 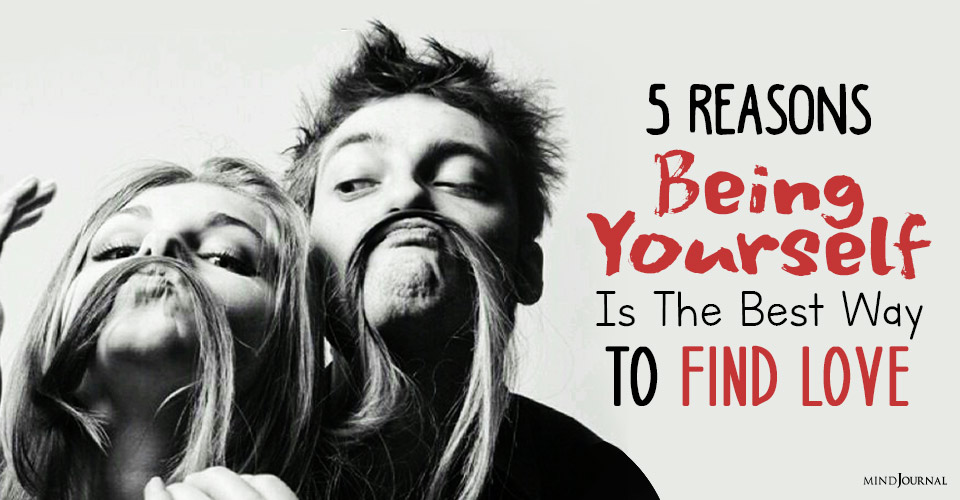 Why they think, would someone want to fall in love with them? They don’t think themselves smart enough or hot enough or funny enough. It’s hard to imagine that anyone would ever want them. So, they create for themselves someone else, someone else they believe will be more lovable, and they put that person out there – hoping to find love.

Related: 12 Signs You Are Losing Yourself In Your Relationship

5 Reasons Being Yourself Is The Best Way To Find Love

1. Being Yourself Is Natural.

Being yourself is the easiest thing in the world to do. You have been yourself for decades, and you can do you like no one else can.

Not being yourself takes work. Not being yourself, presenting yourself as someone else, making conscious decisions to do things differently, all require a tremendous amount of energy. It takes keeping on top of the lies that you might be telling. It takes maintaining a façade of who you are not. It takes hiding things from your new person, all the while doing the very difficult task of trying to find love.

And, if you are working so hard at being someone other than you are, you will have a hard time finding the love you seek because it’s hard to do both at the same time.

2. You Will Doom The Relationship From The Start.

Even if you find love by not being yourself, you won’t be able to keep it.

Imagine you meet someone and they are everything that you had hoped they would be. You fall in love and you look forward to living happily ever after. And then you learn the truth about them. How would you feel?

I have a client who met a wonderful guy and they had a summer romance. He made her laugh, and the sex was great, and she had hopes for the future. As their time together progressed, she noticed that he didn’t seem to have much professional work to do. He spent his time working on his boat and with her, but he never talked about what he did, and he definitely didn’t have money for dinners out.

She repeatedly asked him about this because she wasn’t comfortable with him not working and her having to pay for dinners. He was vague and put her off. Eventually, she got fed up with the whole thing and pulled the plug. He wasn’t the person she thought he was and she moved on.

So, while you might find love by not being yourself, you won’t be able to keep it!

3. Honesty Is The Key To Any Relationship.

One of the most important parts of any relationship is honesty – without it, there is no trust, and a relationship will fail. If you start a relationship off not being yourself, you will be violating the trust of your partner by not being honest.

In the case of my client, she felt like her boyfriend had done a bait and switch – that he had sucked her in presenting himself as a successful businessman, when in fact, he did what he had to do to pay his bills but that was it.