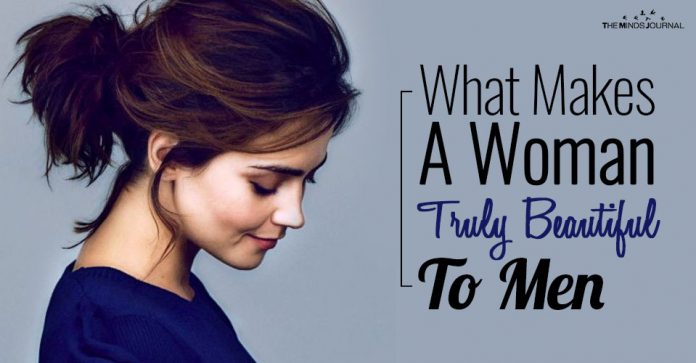 This Is What Makes A Woman Truly Beautiful To Men

What makes women beautiful to men

“Beauty is not in the face; beauty is a light in the heart.” – Kahlil Gibran

There may be various things that make a woman appear attractive to a man. But what makes a woman beautiful goes much deeper than the skin and what we can see with our eyes. It depends on what makes a man fall in love with a woman, her personality, her behavior and who she is as a person. Let’s take a look at what exactly makes women beautiful to men.

As a man with a nineteen-year-old daughter, I am sometimes quite concerned with society’s continuing obsession with beauty, more specifically about our definition and attitudes about a woman’s beauty.

The messages, for the most part, are fear-based and focused not as much on appreciating beauty as artificially preserving it and hanging onto it. The premise is that time and age make a woman less beautiful and that women must sacrifice time, money and health to conform to an externally dictated standard of beauty.

My concern is that the media has bombarded us with messages that have hypnotized us into believing that their definition of beauty is actually true. Like most of the messages we see in the media, the motivation is control and money. The beauty industry is a multi-billion dollar powerhouse that stays in business by telling us what is beautiful and who is beautiful, for their own gain.

I’m not worth nearly a billion dollars, but I am a man who’s been on the planet for over half a century, as well as a psychologist in Los Angeles, so I’ve seen and heard a lot about it, and would like to offer my perspective as a man who’s been around the block and isn’t in the pocket of the beauty business.

“The best and most beautiful things in the world cannot be seen or even touched – they must be felt with the heart.” – Helen Keller

First, a woman is not beautiful in a vacuum, there is always an observer who interprets that beauty, even if it is the woman herself. But what I’d really like to talk about is how a man creates beauty through his perception of a woman.

Yes, I firmly believe that the love and admiration of a man has a role in creating beauty in a woman. As a former engineer, I learned that quantum physics tells us that observation affects the “reality” of what is being observed.

In making this statement, I want to make a distinction between “beautiful” and “attractive”. We are biologically disposed towards what is attractive, based upon what would make good “breeding” material in both sexes. It’s not romantic, but it’s true.

As the theory goes, classic attractiveness is based upon symmetry and proportion. The more symmetrical, the more “pure” and more prone to survival are the underlying genetics. We know and react to this deep within our DNA on a visceral, unconscious level.

This isn’t really news. The designers of the Great Pyramids of Egypt, as well as Leonardo Da Vinci and so many others of the Renaissance, used the “Golden Ratio” of 1:1.62 in creating their masterpieces. When an object or person meets this ratio, we consider it or them to be beautiful.

We can apply this to the ratio of face length to face width. We can apply it to nose-to-chin or pupil-to-nose ratios. It is endless—just ask any plastic surgeon.

“When I think of the most beautiful women, they’re not supermodels.” – Becki Newton

Psychologically, we find attractive someone who embodies the qualities of our primary caregivers. The people who raised us, typically our parents and extended family are our models for a relationship, emotionally as well as physically. Sometimes we choose someone who is the opposite of them, yet we are still using them as our template.

How will you know if he's attracted to you or just "using" you to objectify you?
Read more
Dating

Women don’t want a “Nice Guy”. They may say they do, but what they really mean is that they want a GOOD guy. Here's the difference:
Read more
Dating

How To Deal With A Stuck-Up Woman

You know the kind. She kind of looks at you raises an eyebrow and says something really obnoxious
Read more
wpDiscuz
0
0
Would love your thoughts, please comment.x
()
x
| Reply