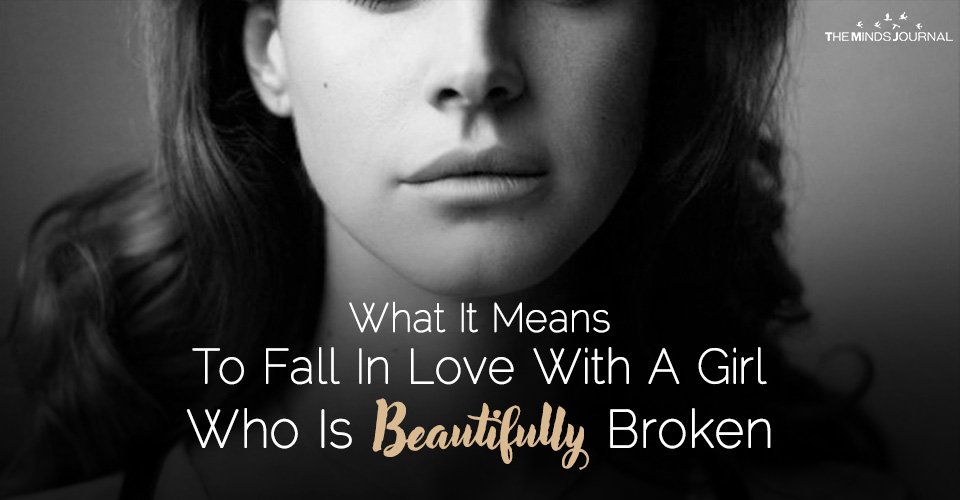 The thing about broken people is they aren’t looking to being fixed. More than anything they want to be loved, as tainted and as flawed as they appear before you.

They’ve given away pieces of themselves to the wrong people and they know they won’t ever get it back. They’ve given their best and it didn’t get them where they wanted. But they haven’t given up and they never stop trying. They spent countless nights crying on the bathroom floor, looking at their reflection, analyzing and beating themselves up for falling too quickly and hurting too easily. But more than that, for letting their guard down.

With every trial and error, they’ve learned. But of the things they learned most is to proceed with caution when it comes to love.

Maybe even push people away when they get too close. You see, someone who is beautifully broken doesn’t really have much to give other than the broken pieces of their heart they hope is enough.

So when you find yourself falling for someone like this, there are a few things you should know about her.

She’s rare but she’s doesn’t see herself as anything different. She’s genuine because she doesn’t want to treat anyone the way people have treated her. Most people would turn cold going through some of the things she did. But it’s made her warm and caring and compassionate at a level that seems unreal.

And ironically the lack of love in her life has made her believe in it more. Because she knows the heartbreak she’s experienced isn’t love but rather a lack of it. So under the layers and behind the walls she puts up is hope that love will be hers one day.

She is not going to trust anything you say. In the past people have used words they didn’t mean to gain something from her. She’ll look at you trying to figure out what you want from her. She’s going to assume it’s all about something physical. And as she’s reading you, you’ll try figuring her out too. But there are a million pieces to a puzzle you’ll never put together until you gain her trust. Be patient. She’s terribly scared of letting anyone that close to her.

Read Why The Strongest Women Often Feel So Broken Inside

She’s going to say it like she sees it. She doesn’t want to waste your time and enough people have wasted hers. She’ll be honest with you to a point where it might make you uncomfortable. She’s not afraid of the things that have happened to her, she’s not afraid of telling about it. The only thing she’s afraid of is the past repeating itself.

3.  She’s going to overthink everything.

The thing about broken people is they know how to read others. She’ll notice something as simple as a change of tone in you. She’ll notice if your responses suddenly become delayed. She’ll even notice if you become slightly uninterested even before you realize it yourself. She’s looking for any warning sign that something is wrong and you are going to take off just so she can be ready for it.

She’s prepared every worst-case scenario in her mind. She’ll analyze every conversation you have and remember even the littlest of details of the things you tell her. She’ll do one thing and second guess herself. She’ll apologize for more than she should, for things that don’t even require the words, ‘I’m sorry.’ Just take it with a grain of salt. Tell everything is okay.

She associates vulnerability with weakness. She has this idea that when you see her at her worst, you’ll want to take off. While vulnerability is a key component to forming emotional connections between people, she fears that connection as much as wants it so badly.

She’s been programmed to protect herself. She’s learned to only need herself. While it is a great strength of hers, it too is a weakness. She knows such strength only because she’s been weak and people have taken advantage of it.

She’s only learned her worth because of the people who treated her like she wasn’t worth anything. Through unkindness and mistreatment and the lack of love others were able to provide for her she learned to give all those things to herself.

5.  She fears falling in love.

People are conditioned to need an emotional relationship in their lives to function. It’s a part of the human condition. But there is a risk that comes with love. A risk a beautifully broken girl has taken and regretted in the past. If you want someone like this to fall in love with you follow her lead, even when she takes off running. Sometimes people run just to see if someone cares enough to follow.

Sometimes people put up walls just to see who cares enough to climb over them. The key to her heart doesn’t come easy. But all great things in life never do and her love is no exception. Her love will change you. Because as much as she fears love, what she really fears more is people leaving taking the bits of what is left of her broken heart.

6.  But more than anything she respects love.

She knows love is the very thing that can heal her. So she takes these chances hoping for the best in people despite what she’s seen. The people who don’t see love often know to value it in its entirety when it does come.

She practices love the same way she’d like to receive it. She’ll give her best time and time again. She’ll love harder than anyone you’ve ever met. She’ll do anything for people. Because she’s not so much afraid of love, the real fear is her love not being reciprocated.

And when you fall in love with her and she brings out the best in you, the only thing you’ll wonder is how anyone in her past didn’t see what they had when they had it.