Use the Socratic Method To Win Any Argument 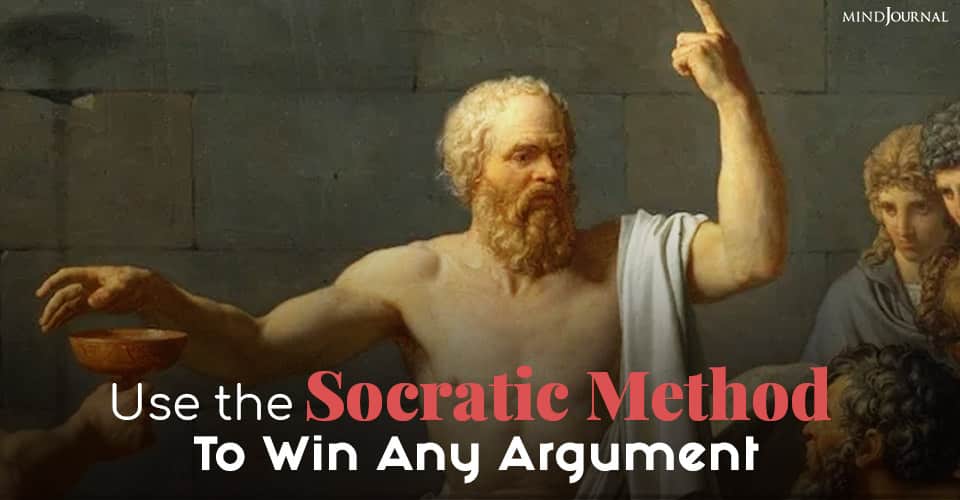 When you use Socratic method to win an argument.

Of course, the title of the article was able to grab your attention.

Obviously, you want to win arguments. Don’t you?

Read on to find out how you actually can win an argument with Socratic method?

Are you sick of silly arguments with your partner?

Do you find it difficult to convey your idea to the other person?

Is the result of most of your arguments a ‘Heated verbal fight’?

Well, if the answers to the above questions in a yes, then by knowing this one simple method you can win over arguments and prove your mettle.

Well, you know how philosophers keep talking about important life matters all the time. Philosophy does try to solve some of our problems through argument but we usually declare the solutions that philosophy offers to be too idealistic and non-practical.

We dismiss them and try to find more “Real” solutions. But maybe, let’s suppose, philosophy does have the answers for you this time! Maybe, philosophy can help you win the argument.

Ever heard the term Socratic Method?

What is the Socratic Method?

The Socratic Method is a 2000-year-old trick that will surely help you to win some arguments. It has stood the test of time and is still quite a popular method for argumentation.

It was developed by Socrates as the name suggests. As most of us know, Socrates was an ancient Greek philosopher whose method was a bit different. He would ask questions after questions from his students during all the discussions that were held.

Because of this the students would get overwhelmed eventually and easily make some self-contradictory remark. This approach thereby proves that there is a fallacy in everyone first argument.

Thus, our views obviously differ from someone else’s views. But we don’t accept the difference in discourse. All we desire is a similarity. Hence, we do need the Socratic Method. It is no wonder then that this method has been held in very high esteem among educated communities for such a long time.

Socratic Method consists of the continual use of questions to transfer the latent idea and to expose the main line of thought.

This approach helps to make the other person see your point of view without any conflict. This makes the person realize that there are other ways of approaching the problem and that those ways are as acceptable as the way the person is suggesting.

Read Here Are 24 Quotes From The Wisest Man Ever Lived: Socrates

The Socratic Method is also known as maieutics or the method of elenchus. Actually, this method was created to arrive at a better conclusion in logic by eliminating hypothesis which does not fit well in the argument.

By this Socrates found out the validity of the “commonly held truth”. He scrutinized this truth with critical questions and thus determined their consistency with other beliefs. By expressing your point in form of a question, you make it less threatening for the other person.

It is a natural human tendency to explain one’s stand, by asking questions, you give the other person a chance to be more comfortable.

But again this depends on how you ask your questions. If questions are asked in a very forceful manner, it will act in a completely opposite way as this will put immense pressure on the other person.
This approach becomes even more important when our loved ones are involved in the discussion.

We do not want to hurt their feelings intentionally but in the heat of an argument, we may end up inadvertently hurting them. The best way to deal with this situation is to use the Socratic Method.

Read Socrates: The Test Of Three

Have you ever counted the meaningless fights that you have had with your partner?

Did you realize that most of these fights happen because the people involved feel that they are not being heard?

This can be avoided if you follow this method.

What you have to do is that you have to listen to the other person keenly and ask them the appropriate questions. By this, they will get a chance to speak more and in the process, you can also make your point clearer.

So, both the parties will be able to communicate the message clearly and effectively and both the parties would be happy and satisfied that they are being heard and that their point is being given the importance and attention that it deserves. This will also help the parties indulge in a healthy discussion which will surely have a legit and proper conclusion.

The beauty of this approach is that it will not only help you win arguments, but it can also save you from embarrassment when you are stuck in a discussion where you know nothing of the subject.

In such a situation your focus should be to try and seek out all sorts of information from the other person by asking questions. And then you can lay your trap of creating a situation of self-dilemma by pointing out a contradiction.

This method is also beneficial when you are indulging in a large group discussion. In that situation, it will serve three purposes:

One, that your question will draw immediate attention from all the members in the discussion.

Two, that it will force others to dig deep on the focal point from where you can create some counter arguments.

Three, that it will keep the discussion going as questions provide the stimulus for further thinking and discussion.

Let’s take an example: If I say that keeping pets at home is good. In response, you can say “Are human homes natural habitat of animals?” rather than “But the forest is animals a natural place to live”. I would then say, “You think humans lived in brick houses 2000 years back? What is an adaptation?” and so on.

Thus, the Socratic Method is useful in winning any argument. It surely should be perused more. Perhaps, the world problems would solve, only if we would have been Socratic enough.

9 thoughts on “Use the Socratic Method To Win Any Argument”