Why You Underestimate How Much Other People Like You 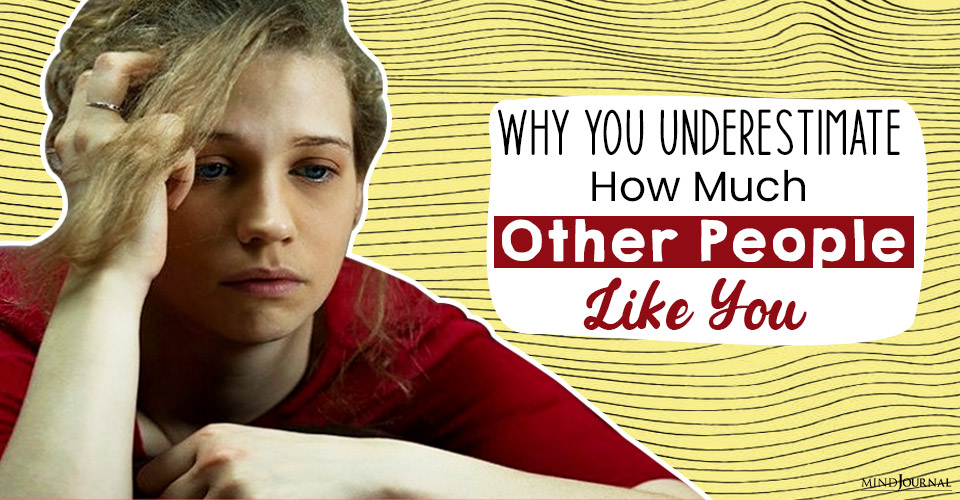 There are times when you feel unwanted amidst groups and can’t tell if other people like you or not. You underestimate yourself and shy away from conversations.

The “liking gap” explains why you should feel upbeat after meeting new people.

We have all had the experience of walking away from a conversation with an interesting new acquaintance, wondering if the other person liked us as much as we liked them. All too often, we end up feeling a bit deflated and assume that we made a bad first impression by talking too much, not talking enough, or by not coming across as articulate and witty.

As it turns out, you are probably being too hard on yourself.

Why You Underestimate How Much Other People Like You

Researchers have identified something known as the “liking gap,” which is our tendency to underestimate how much other people like us following an initial conversation.

This finding occurred in laboratory situations, as well as in real-life workshops attended by people who wanted to learn “how to talk with strangers,” and the effect was especially pronounced among people who scored high on measures of shyness.

It was clear from Boothby’s studies that the problem was due to a failure to correctly read the signals that were being sent by one’s conversational partner because individuals who viewed videotapes of the conversations we’re able to more accurately judge the degree of liking that people had for each other than were the participants themselves!

So, what is going on here?

Related: 9 Psychological Tricks To Attract People And Make Them Like You Immediately

Conversations with new people can be tricky to navigate. Other people do not yet understand your sense of humor (or lack thereof), and neither of you knows how much common knowledge you share or how closely your attitudes line up. Consequently, the conversation becomes a dance in which two people probe for feedback that can help to manage the awkwardness between them. Boothby describes conversations as “conspiracies of politeness” in which people abide by social norms and advance socially desirable versions of themselves. Needless to say, conversations involving more than two people become even more complicated.

And conversations require that we successfully balance the “push” forces that keep people apart and the “pull” forces that bring them together. On the one hand, we want to get to know the other person, and we want them to like us (the “pull” forces), but at the same time, we may be afraid of social rejection or of revealing too much, which may leave us in a vulnerable position (the “push” forces).

In such conversations, other social psychological traps, such as the “spotlight effect,” can lead us to become too self-critical. The spotlight effect occurs when we overestimate the extent to which other people are focusing on us, especially on our shortcomings. We beat ourselves up over every physical imperfection, every awkward question, and every lame joke — and we think that other people remember these things more vividly and judge us more harshly than they actually do. Becoming aware of the spotlight effect can help put you at ease in social situations and make you more interpersonally effective.

Related: The Mirror Effect Of An Empath: Why Some People Dislike You Instantly

Hence, Boothby and her colleagues concluded that other people we converse with are in fact communicating how much they like us, both verbally and nonverbally, but our fear of embarrassment and our preoccupation with the minutiae of self-presentation gets in the way — causing us to miss the very signals that we do hope to see.

Part of becoming a good conversationalist is accurately deciphering how others feel about us. Coming to terms with the liking gap may be a good first step.

Most of the time, you might believe that you like someone more than they like you. Even though that might be true in some cases, that won’t be the case every time. The moment you know and understand how the other person feels about you, you will be able to detect what they are thinking, and how they perceive you.

Frank McAndrew is the Cornelia H. Dudley Professor of Psychology at Knox College and an elected Fellow of several professional organizations, including the Association for Psychological Science (APS). He is also a blogger for Psychology Today Magazine. McAndrew is an evolutionary social psychologist whose research is guided by the simple desire to make sense of everyday life, and he is currently studying gossip, aggression, and creepiness. His research has appeared in dozens of professional journals and it is regularly featured in popular media outlets such as The New Yorker, NPR, the BBC, The New York Times, The Atlantic, and NBC's Today Show. He has written for many popular prints and online magazines, including Time, CNN, The Washington Post, The Chicago Tribune, Salon, Newsweek, The Daily Beast, PBS Newshour, The Huffington Post, The Guardian, The New Republic, and Scientific American. Consistent with his long tenure at a liberal arts college, Professor McAndrew is also an award-winning teacher who is particularly proud of the fact that more than 100 of his former students have gone on to complete a doctoral degree in psychology or a closely related field.View Author posts