Struggles Of An Overthinker: 18 Things Only They Understand 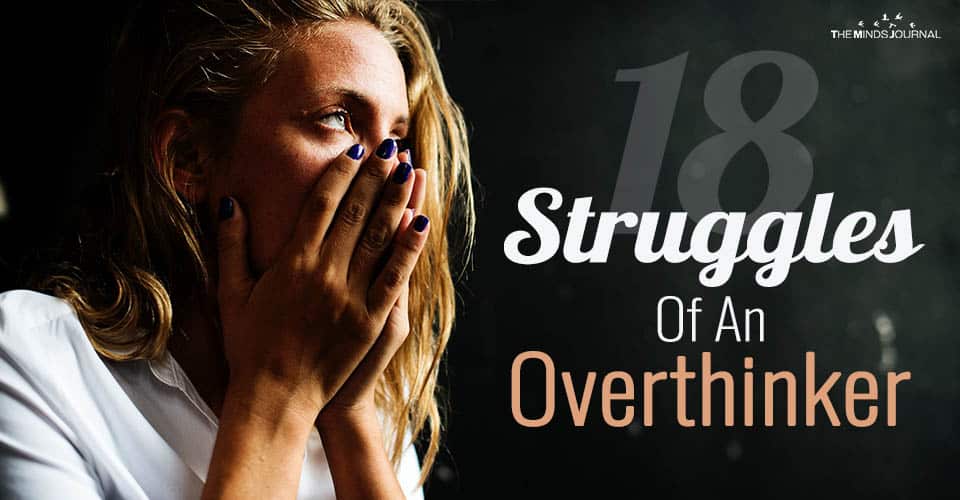 If you’re given an opportunity to work from home during a global pandemic, would you accept it instantly or wonder about possible problems or think of some other alternatives? If you answered yes, then you’re an overthinker. Read on the struggles  of an overthinker

18 Struggles only overthinker can understand

1. Your need to find meaning in everything usually culminates into crafting conspiracy theories about what the period placement in a text means.

2. You end up making every situation in your life about 100x more difficult than it has to be.

3. You cannot let anything go, because you’re convinced that if you just run over the details a few more times, you’ll finally uncover some new understanding of the situation or it will somehow change the outcome.

Want to know how to stop overthinking everything? Watch out this video

4. You’ve probably never been sure about a thing in your life. You’ve approached everything from choosing a school and a partner to your outfit in the morning and brand of bread at the grocery store with equal levels of angst.

5. You could get a Master’s degree in interpreting what the song lyrics people post really mean.

6. Though your critical thinking skills are pretty on point, the toughest reality you’ve had to come to terms with is the fact that, simply, not everything has a deeper, secret, hidden meaning that everyone knows but you.

7. You’re constantly thanking the friends who stick around to hear you mull over the same details of a situation or relationship again and again, and though you never really arrive at a different conclusion, just the act of overthinking is enough for you.

8. Constantly having to consult your other friends with screenshots and vivid details of any chance occurrence in your life is a daily routine for you.

9. It doesn’t matter what word someone used if there’s any way you can spin it to mean something more, you will. You’ll take the fourth definition of it in the dictionary, apply it to your worst trait and spend the rest of the day reeling.

10. You are known to regret texts, hesitate over writing emails, delete and re-write tweets, all because you could and should have said something other than what you did and will.

11. Your hangover after a night out drinking is nothing compared to the fear of what you could have said to that one person you’d rather die than act like an idiot around while drunk.

Related: 11 Ways To Put An End To Overthinking

12. Sleep is the most difficult aspect of your life because laying silently in the dark is the only time you aren’t distracted enough to not be able to sink into racing thoughts.

13. You convince yourself that the worst-case scenario will come true in basically, y’know, any scenario.

14. Social media is a minefield for you. You are certain every subtweet has something to do with you, even if it’s from a stranger, that so-and-so used that emoji because they’re flirting with the love of your life and so on and so forth.

15. If someone ever breaks up with you/declines to go out with you, you convince yourself it’s because of a hundred inconsequential missteps you made.

16. You often find yourself proudly stating to your friends that you “figured out” what someone “really meant” by something, only to have them laugh and say “you are so overthinking this, I can’t even right now.”

Related: Here’s How To Stop Your Brain From Overthinking

17. You end up torturing yourself over every other banal side comment someone makes because obviously there is some meaning to be uncovered, it’s clearly just a matter of thinking about it until you find it.

18. God forbid anyone to unfollow you on Twitter or Instagram because you won’t sleep until you figure out who it was and why.