3 Easy Steps To Achieving Your Goals According To Science 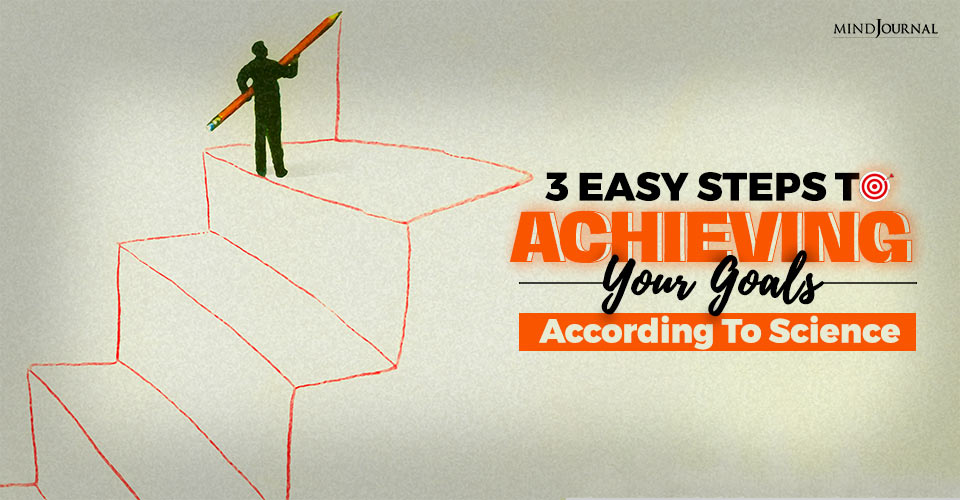 Goals are extremely important to unlock the purpose of your life. The first step you can take towards achieving your objectives is to set clear written goals and focus on achieving them within a deadline, rather than hoping to achieve them someday. They say dreams don’t work until you do. But setting a goal is fairly easy while staying on track to achieve it needs practice and motivation.

Many people are living in mediocrity and most don’t seem to get anywhere worthwhile because they lack direction. Setting and achieving goals seems quite difficult for them. They have no idea what they want out of their lives.

One of the most important keys to success and living a fulfilling life is to know what you want and work relentlessly toward that worthy ideal. The problem is that most people have no idea what they want. Or in other words, they don’t set goals for themselves.

If you think about extraordinary people who went on to accomplish amazing success in life such as top-level athletes Michael Jordan and Tiger Woods, and successful entrepreneurs like Elon Musk and Mark Cuban, you will notice that they all shared a common trait – they know what they want, they set goals, and they are making progress towards reaching their goals every day.

When you set goals, it gives you a long-term vision to focus on and at the same time, it also provides you the short-term motivation you need to work through each day. Dr. Gail Matthews, a professor at the Dominican University, once conducted a study on how writing down goals, committing to action, and being accountable, can influence the achievement of the goal.

Dr. Gail Matthews recruited 267 participants from various groups ranging from age 23 to 72, and they were all from different countries including the United States. England, Japan, and Australia.

The participants were then randomly divided into 5 groups:

Group 1 – Participants were simply asked to think about their goals (what they wanted to achieve over the next 4 weeks) and rate the goals according to their difficulties, importance, motivation, and more.

Group 2 – Participants were asked to write down their goals and rate them.

Group 3 – Participants were asked to follow Group 2 and also to formulate action commitments.

Group 4 – Participants were asked to follow Group 3 and also send their goals and action commitments to a supportive friend.

Group 5 – Participants were asked to follow Group 4 and also send a weekly progress report to a supportive friend.

Guess what happened at the end of the 4 weeks?

This means when you write down your goals, make actionable commitments, and send a weekly progress report to a supportive friend, you are 76% more likely to achieve the goal.

“Believe in yourself! Have faith in your abilities! Without a humble but reasonable confidence in your own powers you cannot be successful or happy.” – Norman Vincent Peale

Therefore, to achieve outstanding success and reach your goals, you need to focus on these 3 easy steps:

1. Write down your goals

First, you have to identify what you want to achieve, and then you will have to write it down. Many personal development coaches like Jack Canfield, John Assaraf, and Robin Sharma suggest their students write down their goals because when you do so, you increase your commitment to your goals.

After all, you will never bother writing something down if it is not important to you, right? Hence, make it a habit to write down your goals and constantly review them.

Related: 7 Examples of How Successful People Set Goals and Achieve Them

Eventually, his dreams came true. He became the world’s most syndicated cartoonist. In the year 2000, Dilbert was featured in 2,000 newspapers in 57 countries and 19 languages. The comic strip also spawned dozens of television series, books, and themed merchandise items.