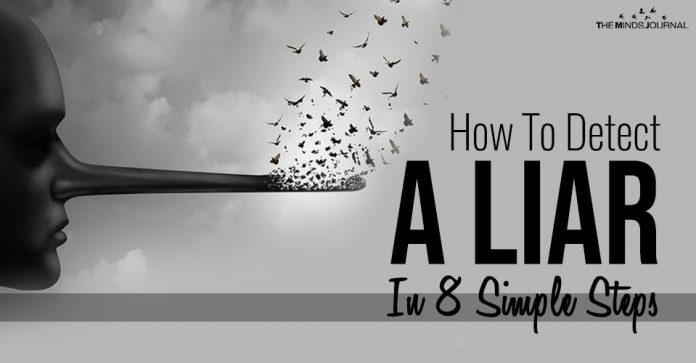 How To Spot A Liar In 8 Simple Steps

To a liar, the most dangerous individual is the person who catches lies but doesn’t say anything about it. Then the liar isn’t sure which lies are compromised.
– Jesse Ball

Chronic liars tend to disrupt the fundamentals of honesty and integrity. They break people’s trust and somehow manage to get away by constructing more lies.

Lies do pave out easier ways to achieve ends, and it is this convenience that has made them the most common manipulative tactic used.  People will always get away with lying, but if you know how to read the signs, most lies are pretty easy to spot.

Here are a few techniques to determine if someone is telling the truth or not.

For the liespotter who knows how to listen well, the random words, sounds, and phrases in a person’s speech are never as random as they seem. They offer a clear sightline into the liar’s psyche.
– Pamela Meyer

8 Simple Steps To Spot A Liar

Before getting on board with the identification process, you should first get a fair idea of how they respond when telling the truth. For that, you need to ask questions which has least possible chances of getting false answers. Ask them about the weather, their favorite travel destinations, their favorite dishes, movies, artists, etc.

Basically any question that doesn’t pose a threat to their integrity. What you have to do here, is maintain a casual approach and notice the subtle expressions they tend to give off when comfortable. In this way, you’ll get a baseline against which you’ll be able to measure the fluctuations that occur when they communicate blatant lies.

Steer your question answer session in the lie detection domain. They will get uncomfortable the moment they step in. Here, you have to inquire things they’re most likely to lie about. You’ll find slight deviations from the baseline you gathered from the previous step. Measuring these changes will help you determine the level of false information they’re trying to convey in that particular conversation.

3. Observe The Shifts In Their Body Language

Liars subconsciously exhibit subtle shifts in their body language when conveying a lie. The more carefully you observe the changes, the better you’ll be able to determine the depth of the lie. You’ll find them curling up a bit. Or maybe crossing their arms and legs. Basically they’ll give off gestures indicating their attempt to hide or conceal themselves. These are clear signs of reluctance a liar unknowingly radiates when engaged in such conversations.

4. Look Out For Facial Expressions

A liar’s facial expressions are one of the major signs of emotional instability. Different parts of the face get distorted according to the nature of the lie. It might be the eyes, the nose or cheeks. You have to engage them in conversations and at the same time keep noticing these changes.

You must be highly focused in-order to not miss out on even the slightest alterations. One thing you should always bear in mind, is that you should never let them realize that you’re examining them. Else they’ll make the process all the more difficult by manipulating the behavioral patterns you’re tracing.

5. Be All Ears To The Tonal Shifts

Vocal chords respond to neural signals that are generated when someone is lying. This results in changes in voice tone and cadence. When we know we’re speaking the truth and are confident about it, we talk in a more assertive tone. But when we deliberately lie or are being compelled to do so, our voice becomes slightly distorted. In that moment, we speak in a more restricted tone, as if wanting to get over the topic as quickly as possible.

6. Note The Repetitions And Stammering

People communicating lies tend to repeat words and phrases. When probing deep into their minds, you’ll find them getting nervous. They’ll stammer and will often lack clarity in whatever they’re trying to convey. Here, you can leverage these traits in exposing their attempt to lie by regulating and narrowing down the questions to specific points.