15 Weird and Interesting Facts about Dreams 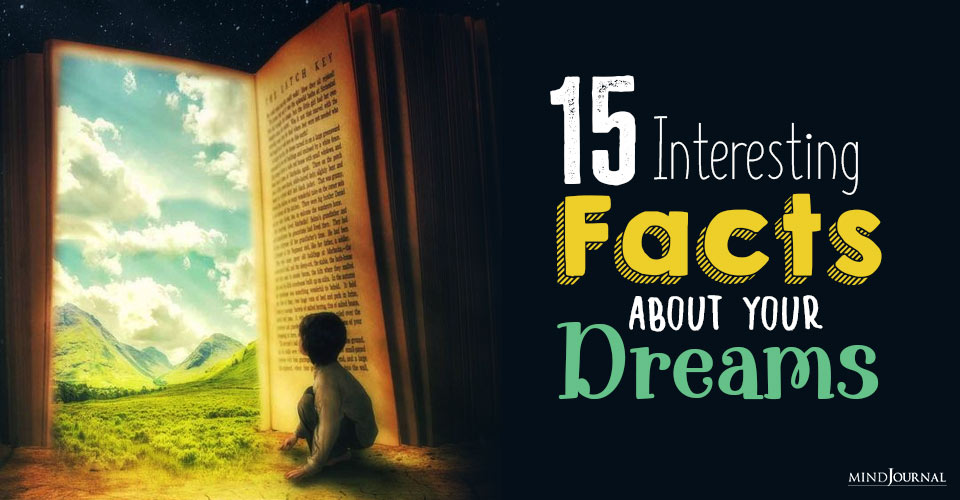 Dreaming is one of the most mysterious and amazing experiences in our lives. Let’s reveal some strange and interesting facts about dreams and what they mean.

During Roman times, several dreams were submitted to the Roman Senate for analysis and interpretation. They were considered messages from the Gods. The dream interpreter even accompanied military leaders in battles and campaigns!

In addition to this, many artists and creative personalities have received a sense of epiphany or innovative ideas in their dreams. So what are you waiting for? Take a look at the interesting and weird facts about dreams and sleep.

But what do we actually know about dreams facts? Read below to know more.

Here are some psychological facts about dreams and sleep:

Half of your dream is forgotten within 5 minutes of waking up. Within ten minutes, 90 percent is gone. Dream recollection can be tough, but there are a few techniques that can help.

One method is to keep a daily journal in which you try to jot down all the details you remember when you wake up. Keeping a dream journal on a regular basis will improve your cognitive powers and train your mind to remember dreams better in the future.

2. Blind people can dream too

Did you know that blind people can also see images in their dreams? However, those who became blind after birth are subject to visual dreams. Those who are born blind, on the other hand, can not see images, but their dreams are just as vivid, including their other senses of sound, smell, touch, and emotion.

Read Interpreting Your Dreams: What Messages Dreams Give You About Your Life

Dreaming is healthy and normal part of everyone’s sleep cycle. Every human being dreams (except in cases of extreme psychological disorder). So if you think you are not dreaming or have never dreamt – then you just forget your dreams or have an underlying reason behind it.

4. We only see faces that we’re already familiar with.

Have you ever had a dream in which you saw someone you’ve never met before? It may appear such, but it is not possible. The human brain is incapable of “generating” a new face.

We essentially see the faces of people we’ve met in person even though we may not recognize or recall them, but our unconscious mind has an infinite supply of characters for our brains to use during our dreams

5. Most people don’t dream in color

According to studies, 12% of normally sighted people have entirely black dreams. The remaining number have vivid dreams.

The majority of dreams were in black and white from 1915 to the 1950s, and this began to change during the 1960s. Now only 4.4% of people under 25 have dreams in black and white. The shift from black-and-white movies and television to color media may be the underlying reason behind this altered outcome.

6. Dreams have a symbolic meaning

If you’re dreaming about something, it’s often not related to that topic but has a deeper meaning. Our dreams speak to us in deep and symbolic words. Whatever symbol your dream chooses, it is very likely that it will be related to something in your immediate life.

However, although there is no clear evidence of what a dream is made up of, it is generally accepted that it represents a collection of thoughts, struggles, emotions, events, people, places, and symbols that are somehow related to the dreamer.

Read: The Origin Of Dreams And How They Affect Our Lives

7. We experience various emotions in our dreams

The Dream Experience (DE) represents a fascinating state associated with the emotional process and the human inner world. The most common emotion you experience in a dream is fear and anxiety. Negative emotions are more common than positive emotions. How do you usually feel when you dream?

8. An average person can have 3 to 5 dreams in one night

Everyone dreams approximately 3-6 times every night. Dreams are normal and a healthy part of a sleep cycle. It consists of a series of images, stories, emotions, and feelings that occur during the sleep phase. On average, you can dream for an hour or two every night.

Studies have been conducted on various animals, and they all show the same brain waves that humans have when they are dreaming. To find out if it’s true, you can try to watch a dog sleeping for some time.

You will likely notice that their paws move like they are running and they make soft sounds as if they are asking for help or chasing something in a dream.

Rapid eye movement (REM) sleep is a sleep phase normally an increased heart rate or muscle paralysis. REM sleep usually accounts for 20 to 25% of an adult’s total sleep, which is about 90 to 120 minutes.

During REM sleep, brain mechanisms paralyze the body to prevent the movements that occur in dreams from moving the body. However, this mechanism can be triggered before, during, or after normal sleep while the brain is awake. Many people see this as a demonic or supernatural aspect.

Our mind interprets external stimuli that shock our senses when we sleep and makes them part of our dreams. This means that in our dreams we may hear and incorporate noise from reality. For example, you might dream of attending a concert while your brother plays the guitar next to you when you’re sleeping.

While there may be a gendered and generalized notion of how dreams are among men and women. It is said men dream more about aggression whereas women dream about emotional or harmonious things or relationships.

13. Can dreams predict the future?

Precognition, also called future sight, refers to the perception that involves the acquisition of future information that cannot be deduced from presently available and normally acquired sense-based information.

Read Law of Attraction 101: The Secret To Manifesting Your Dreams

14. If you’re snoring, then you cannot be dreaming.

This may not be an actual fact as there isn’t enough scientific evidence to support it but you may find it all over the Internet. Apparently, snoring is unlikely to occur during the REM cycle of sleep.

15. You can experience an orgasm in your dream

Not only can you have sex as enjoyable as real life while dreaming, but you can also experience orgasms as powerful as the real thing. Isn’t that strange but crazy?

We hope you had an enjoyable time reading these amazing facts about dreams. Try to go back to bed and check if these facts are really true. Don’t forget to share your weird dream facts in the comments below!

How long can a dream actually last?

Dreams vary in length from person to person. They can last for a few seconds or about 20-30 minutes. Most people don’t remember their dreams after they wake up.

Is it true that dreams have spiritual meanings?

Our dreams speak to us in deep and symbolic words. Whatever symbol your dream chooses, it is very likely that it will be related to something in your immediate life.

What is lucid dreaming?

Lucid dreaming is a unique state in which one realizes that one is dreaming and is sometimes able to manipulate their dreams.

1 thought on “15 Weird and Interesting Facts about Dreams”