5 Signs You Need To Stop Settling And End Your Relationship 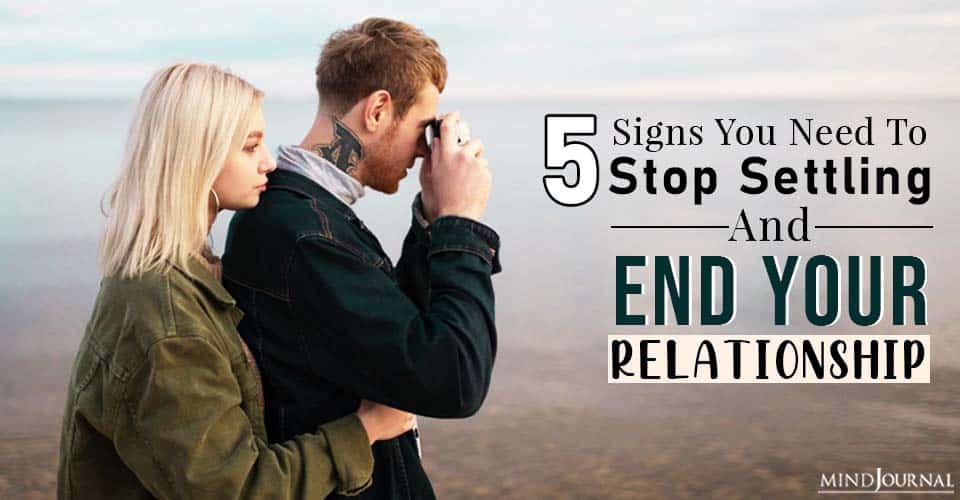 That almost-right relationship is so hard to leave. After all, it’s almost right! Yet staying with someone who’s not what you need virtually guarantees you won’t meet someone truly right for you.

Related: 5 Reasons Why You Might Want to End Your Relationship

Here are five common, research-backed situations when an ending is definitely needed.

1. When They Lack Even One Of Your Must-Haves.

Don’t make someone your project; you are your project and they are theirs. Find someone you like as-is, not someone you want to fix! If your sweetie has a deal-breaker, the deal is broken. Find out and get out early, or repent at leisure.

I knew a couple who didn’t want to look at their Must-Haves—so they married without discussing whether they wanted children. She didn’t. He did. The marriage ended over the bitterness that ensued. They spent countless hours and dollars and tears in therapy, all because they wouldn’t have the tough conversation and do the breaking up when it would have made sense: during courtship.

Sooner is better; break up as soon as you know the deal is broken. If you’ve waited past that time, the second-best time is now!

2. When The Pain Outweighs The Pleasure.

From Shakespeare’s plays to today’s music scene, it sounds as if turmoil, drama, and angst are natural parts of dating. And they are—natural parts of dating the wrong one. Folks, if this person isn’t a good fit, you don’t have to ask why. There could be dozens of reasons, but they all add up to: Move on. The right one feels right! Intimacy with them feels wonderfully life-affirming. Don’t sign on for less.

Oh, it’s so tempting to tell ourselves we don’t really need [name the quality you really do need]–especially when this person has so much else that we want. Near-misses suck! But if this person isn’t who you need in courtship, your own common sense and many, many studies indicate they’re even less likely to be who you need later on.

Judson knew only too well how that feels: “Cora and I have everything in common. We go on outings anyone else would call a date, take care of each other when we’re sick, and talk every day. But there’s no physical intimacy, and never has been. More than once she’s said the vibe isn’t there for her, and friendship is all I can expect. A year ago, I took a break to check my emotions, and all that broke was my resolve. I called within a month. Now I’m in love. Is there a way to remain Cora’s friend without it getting in the way of my finding someone else? How do I get over her? Last time, that didn’t work so well.”

Or consider this letter from Julie: “I’ve been dating Cal for half a year, during which he’s introduced me to his parents and taken me on weekends with his friends. He hasn’t called me his girlfriend, hasn’t said he loves me, and hasn’t asked to be exclusive, but his friends said Cal talks about me more than anyone else he’s dated. We have great sex, but there’s never a mention of the future. Finally, I couldn’t stand the confusion anymore. I sent him an ‘I love you, do we have a future?’ text message. He became very distant and (eventually) sent this reply: ‘Hey, Sweetie. I don’t want to tell you this, but although I care for you it’s not on the level that you care for me. I don’t want to hurt you, you’re great. I just don’t see a future together.’ He hasn’t asked to see me again. His response has me more confused than ever. What’s your interpretation and advice?”

Judson and Julie may love their partners, but without their partner’s love, it’s just a Better-Than-Nothing time sucker and emotion waster. Quit them cold-turkey. Unrequited love is broken love. Don’t settle for it.

Related: 8 Questions to Ask Before You End Your Relationship

And then there’s Kevin’s problem. He doesn’t love Sheila, although she’s a great person.

Love is globally important—the single most important quality for a mate, in fact, according to the more than 10,000 people in Dr. David Buss’ study spanning 37 diverse cultures. It always has been. Notwithstanding historians’ musings that love is a recent, European invention, it’s always existed—at least as long as written history can attest. For instance, Biblical love-n-lust poem Song of Solomon is an ancient text. All that talk of climbing her palm tree to grasp her fruit was not about arbors.

Love on its own isn’t enough to make a marriage, but a marriage without love is unlikely to last, either. Per science, love is the great motivator; it keeps us together, faithful, and helpful, encouraging us to take care of one another long after passion has waned and body parts need replacing. On the flip side, when partners get committed sans love, the divorce, abandonment, and affair rates are high.

5. When Your Intuition Says So.

You might be surprised to find intuition showcased in science. A few years ago, I sure was. Yet intuition is real—and scientifically confirmed. Seated in the right hemisphere, or half, of the brain, intuition is knowing without factual proof.

In experiments with people who’ve had surgery that keeps their right and left hemispheres from communicating (done to control the spread of electricity that can worsen epilepsy), people do curious things. For instance, if the right hemisphere is exposed to the word “sun” and the left half experiences the word “dial,” they’re only conscious of having experienced “dial.”

But when asked to draw a picture with their left hand—which is connected to the right hemisphere—they draw a sun. The right half knows. It just can’t directly say so, because it’s non-conscious.

Intuition probably exists to save us; the biggest threat to most people is other people. And intuition is particularly accurate in areas where we have lots of expertise or experience. I suspect it also works best in scenarios that would have been vital to our ancestors’ survival and reproduction—like mate selection. Our intuition can tell us we’re with the wrong partner. It might not be an emergency; still, the voiceless voice is there.

The first time my intuition piped up, I was engaged. I didn’t listen at first, so it gradually escalated its alarm, from anxiety to panic attacks to a dream where the voice became conscious: “You must not marry this man!” I left—and all symptoms of anxiety left too.

We also ignore intuition from fear of losing this partner, readiness to be done with the search, and feelings of guilt over leaving a partner who hasn’t done anything wrong.

But your right brain does not care about any of that. It cares about protecting you. Listen. Don’t half-lid your eyes just when you need them wide-open. Remember that you are still investigating this person until you get married.

When a dating relationship needs ending, end it. Nobody ever said, “Thank you for settling for me.” Don’t guilt-trip yourself to the altar, only to stumble in the biggest decision of your life! Break up and set both of you free to find love for a lifetime.

Tags:breaking upbreakup adviceLETTING GOsigns you should breakup
previousWhy Socializing For Introverts Is Exhausting, According To Science
nextWhy Your Narcissistic Mother Hates Your Body