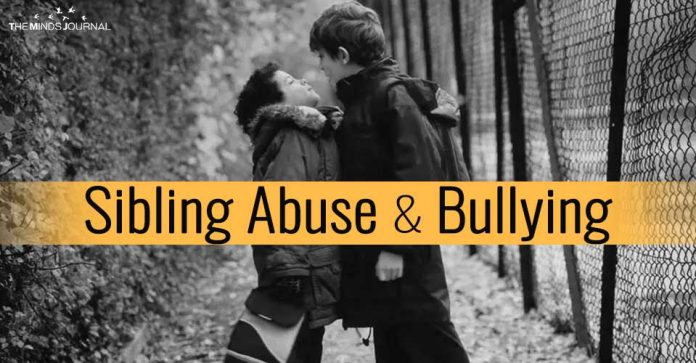 Sibling Abuse And Bullying: Why You Need To Prevent It Immediately

The usual victim of bullying in a sibling relationship is mostly the thoughtful and sensitive child. On the contrary, the bully might also be facing some serious issues and problems which the parents fail to notice. The aggressor may be bullied and abused by parents, older siblings or even at school. They may be simply acting out and transferring their pain, trauma and frustration to another person. This can often be seen in unhealthy and dysfunctional families where the children may feel unloved, neglected and unsupported. Hence, bullying a younger sibling may be an act of retaliation or simply a cry for attention.

Apart from these there may also be some other less common reasons for sibling bullying. The aggressor may be suffering from certain personality conditions and disorders. Moreover, children can also act like bullies to exert dominance over other siblings and gain a power position in the family. By abusing and bullying their siblings, the aggressor gains control over other siblings and gets things his/her way.

Sibling bullying can also happen if parents are not serious about reprimanding bad behavior in children. When parents think that bullying among siblings is merely a phase and just ‘sibling things’, the aggressor becomes more confident while the victim shuts down even more.

The sad truth is parents often fail to identify bullying and abuse among siblings as society expects brothers and sisters to fight and be aggressive as children. Although arguments among siblings is normal, parents should also realize abuse can lead to serious mental and emotional damage.

It is often easy for parents to confuse sibling bullying with sibling rivalry. But these are not the same. Sibling rivalry doesn’t lead to the victimization of one child. This is why it is important that parents effectively identify sibling bullying. Parents need to realize that bullying doesn’t necessarily involve physical abuse. Mental and emotional abuse can be just as damaging.

One of the best ways to identify bullying among siblings is recognizing the 3 components of sibling bullying:

When one sibling dominates another and regularly engages in intimidation, humiliation, name-calling and different forms of abuse, it is undoubtedly sibling bullying. This kind of behavior is unacceptable and parents should intervene immediately to protect both children. As a parent, you always need to keep in mind that if one child is always the abuser and aggressor and the other child is always targeted and victimized, it is an abusive sibling relationship.

Here are some common signs of sibling bullying and abuse:

How it affects sibling relationships

“Bullying is a horrible thing. It sticks with you forever. It poisons you. But only if you let it.” – Heather Brewer

Unfortunately, the relationship dynamics mostly remain consistent between the bully and the victim even into adulthood. The aggressor will keep on bullying, abusing & victimizing their sibling well into their adult lives as it boosts their fragile ego and sense of self-worth. After years of abuse from their sibling, the victim will become bitter, hateful and unsympathetic. However, they will likely allow the bullying to continue as they will be unable to find a way to stop it or change the circumstances.

Estrangement is fairly common among adult siblings and recent study conducted by Cornell University discovered that 1 in 10 adult individuals have alienated themselves from at least one family member, especially siblings. For victims of sibling abuse and bullying, estrangement is a last but necessary resort as avoiding contact with the aggressive sibling is their only way to free themselves from their sibling’s abusive grasps. Although estrangement may not be easy, it provides the victims a much needed sense of relief and an opportunity to rebuild their self-esteem and sense of self worth.

Effects of bullying among siblings

Sibling bullying can leave lasting mental and emotional scars on the victim that can even adversely affect their adult lives. According to a study conducted as a part of The National Survey of Children’s Exposure to Violence, being bullied by a sister or brother, whether severe or mild, can lead to serious mental health issues in children.

Podcasts for kids are an antidote to increasing screen time when stuck indoors!
Read more
Abuse

So do narcissists really have a “playbook” used to manipulate you?
Read more
wpDiscuz
0
0
Would love your thoughts, please comment.x
()
x
| Reply