12 Reasons Why The Middle Child Is Always Likeable 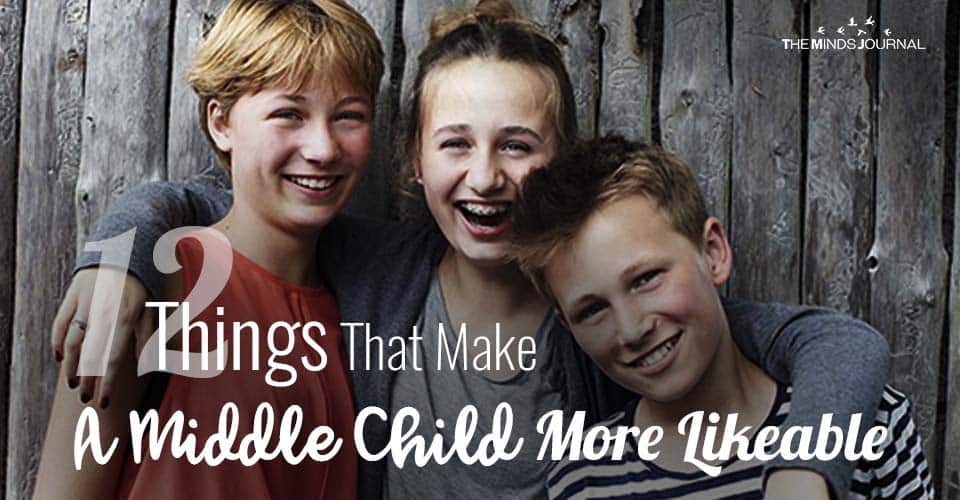 Are you a middle child in your family? Do you find it tough growing up with older and younger siblings? Well, being a middle child is not all boring or bad. Research says that middleborns are always likable. Read on to know what makes them likable and special members of a  family.

Middle children are open, introspective, and are always in the quest to try new things, according to Katrin Schumann, the co-author of The Secret Power of Middle Children. This trait makes them more successful than other siblings. Some of the most famous musicians, artists, and leaders in this world seem to occupy the middle spot in their family.

One of them is Mark Zuckerberg, raised with three sisters was an innovator from start. He started a company in college, which has since changed the way people communicate or make friendships.

2. They are hard workers.

Middleborns has some of the strongest work ethics out of anyone. They are driven by internal motivation and don’t wait for anyone else to solve their problems. They are found to be productive and hard-working from a young age. Because they stick to rules and that makes them likable.

Michael Jordan, the popular basketball player was the second-youngest of five kids. Yet he was always an extraordinary player in his high-school basketball team. His elder brother, Larry was the senior player of his team but could never outpace him.

“People ask me all the time if it bothered me, but I can honestly say no because I had the opportunity to see him grow. I knew how hard he worked,” said Larry to ESPN.

Do you know how birth order can shape your personality? Watch out the interesting video:

According to GinaMarie Guarino, a licensed mental health counselor and family therapist in New York. middle children are good at managing conflicts. Growing up with the oldest and youngest siblings, they develop a unique personality. They play an amazing role with strong negotiation at times of chaos in the family. Because they form a special bonding with each sibling and it makes them agreeable. Being fair they can easily mediate and create a balance.

Diana, the Princess of Wales, is a middleborn and is admired in England and around the world for her generosity, kindness, and charity work.

A middle-child knows logic and reasoning, which makes them easily comprehend complex topics. They surprise people with their intelligence. Take Warren Buffet, the investment genius who is known to have a net worth of $84 billion. Bill gates who is also a middle born, dropped out of Harvard to start Microsoft.

Self-motivation and resilience are the two most likable traits of middle children. Jennifer Lopez, the singer, dancer, and actress grew up with two sisters in the Bronx. Starting her career as a backup dancer, she moved on to singing, comedy, and acting.

According to Schumann, for middle children, “becoming a performer is a surefire way of assuring that you won’t be lost in the crowd.”

Middle children are less complaining and more independent. It might because they get less attention from their parents. They are comfortable being alone and finding their way forward in every matter. The emotional distance from parents gives them the need to prove and differentiate themselves as adults.

Do you know that 52% of U.S. presidents are middle children? The common traits of these people are strong negotiation skills and independence. They can take risks and work hard, the quality most important to be successful.

7. They are great relationship partners

As per the review of 200 birth order studies, middle children are highly faithful in monogamous relationships. This can be attributed to their ability to make compromises and cooperate with people. Also, they are very reliable and never flaky. One can easily count on them.

According to pediatrician and personality experts, middle children prioritize friendships and look forward to long-term relationships. They avoid conflicts and are good mediators. Instead of acting stubborn and contentious, they deal with circumstances selflessly.

Hence, they make the best companion and satisfying partner according to Schumann. They love to enjoy, which is a likeable characteristic and the reason why most people enjoy being with them.

9. They know how to compromise.

Middle children don’t pick petty arguments. They can compromise and go with the flow. They have a strong grasp on their beliefs and values. From sharing toys with elder siblings to taking care of youngers, they learn many life lessons. They are concise and calculated. They can easily perceive things and understand them. This quality makes them the most likable and must-have members in group projects or any teamwork.

Related: Reaching a Compromise: The Second Part of the State of the Union Meeting

Being sandwiched between siblings, middles have common ground. So, they grow up being the mediators. Looking at problems with logic and facts is something innate to them. This factor makes them easily approachable. Siblings look forward to them to interact and communicate. Being hardworking and resourceful, middleborns aren’t flustered with difficult life situations. Their role is essential for family structure and dynamics.

11. They are good listeners.

Everyone wants a good listener when it comes to solving their problems. A Middle child is a perfect fit. Not only a good listener but are also very empathic. They aren’t driven by emotions but see things as right or wrong. They can give you valuable insights to help you make difficult life decisions.

Besides resilience, intelligence, hard-working and strong work ethics, they have grown up having to compete over everything. This explains why popular middleborns are great competitors. Many great athletes are middle children. They know how to win something through sheer will power.

I hope you enjoyed reading the article! If you are a middle born and could relate it then leave a comment below. Also, share it with your friends.