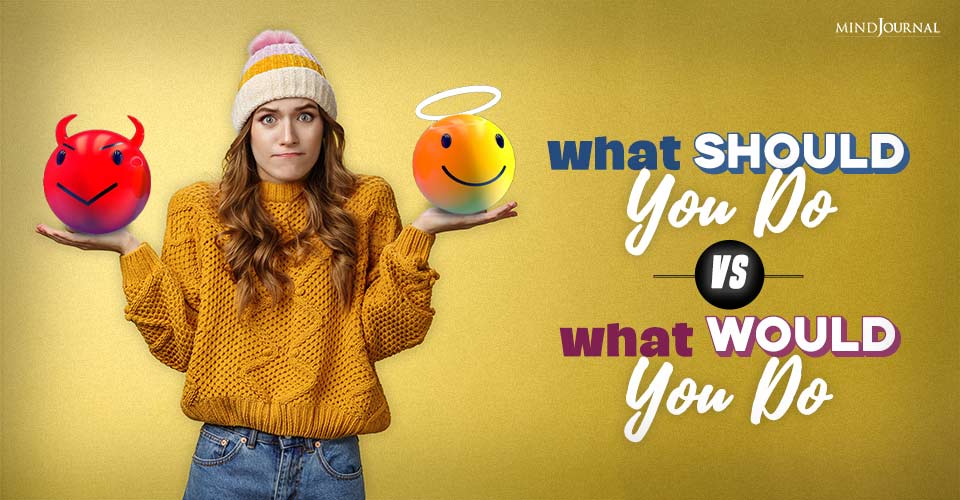 Sometimes there is a thin line between the ideas – what should you do and what would you do – and most people tend to get confused with this. They might seem to hold the same meaning, but if you think about it a bit and dive a bit deeper, you will realize that they are completely different concepts.

I was recently presented with an article by the best-selling author Bruce Weinstein. He is the author of books such as Ethical Intelligence and The Good Ones. His article Should vs. Would was a question and answer discussion that first appeared via Knight-Ridder Tribune News Service and later via Kansascity.com.

The question posed to Weinstein was as follows: What is the difference between asking, “What would you do?” and “What should you do?”

To me, this is a very intriguing, yet simple discussion on ethics and morality. Let’s take a quick look at Weinstein’s answer.

Weinstein informs us that the first part of the question, “What would you do?” is a psychological question. He informs us that psychology explains why we do what we do. The second part of the question, “What should you do?” is an ethical question. He explains that ethics help us to understand whether we have made the right decision.

Let’s take a look at how Weinstein uses this in an example. He comments, “If you are a parent, ask your child what he or she would do if they saw someone cheating on a test. If they’re like most students, they will say – I would keep it to myself.”

He then proposes a simple switch in the way you word the question. He advises that we should ask, “What should you do?” By doing this, he says that you will probably receive a different response from your child, such as: I should talk with the person and probably even tell the teacher. A completely different response by changing one simple word (would to should).

Weinstein explains that this example is one of many examples explaining the difference between how we “actually” behave and how we “ought” to behave.

Related: Morality Of Wisdom: There Is No Such Thing As Good Or Bad

One simple word changes everything

Weinstein advises us that the next time we ask a friend for help with a problem, we should pay specific attention to the language our friend responds with. For example, he says they will most likely respond with, “What I would do is this…” yet what you are really asking is something more in line with, “What is the right thing to do?”

If we reframe our question or ask them specifically, “What should you do?” or “What is the right thing to do?” you might find that there is more of a desire to tell the truth. He informs us that, by reframing the question your friend will have to appeal to ethical principles in justifying their response.

So, make sure to pay attention to how you word your question and how someone responds to a question. A simple change in one word dictates the type of question being asked and the type of response received.

I will leave you with the following quote,

“We ask a simple question And that is all we wish: Are fishermen all liars? Or do only liars fish?” – William Sherwood Fox

The simple question of what you should do vs what you would do might seem a bit confusing at times, but it really isn’t. Ultimately, it all boils down to ethics and human psychology. They might be straightforward and simple questions, but they can have a deep impact on a person’s psyche, and give you a glimpse into who they are as a person.