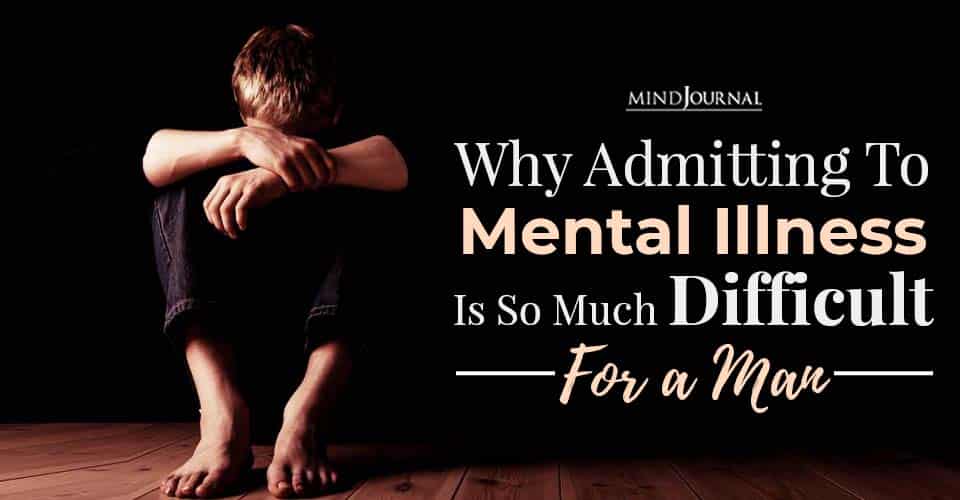 For men, there are few things more taboo than admitting to mental illness. When a man admits, that he is suffering from a mental illness, it’s like his ‘masculinity decreases’.

More than 25% of men suffer from mental illness, although the number may be even higher because so many cases go undiagnosed and therefore unreported.

In many cases, men would rather turn to alcohol and street drugs than to admit to suffering from mental illness and seek treatment.

Men are also less likely than women to say, “I can’t meet you today, I have an appointment with my psychiatrist.” Men just don’t discuss their diagnoses, therapy or their psych meds openly with their partners, family, and friends, not to mention their colleagues or employers.

There’s a tremendous amount of shame associated with mental illness as it conjures up frightening images of weakness.

Admitting to struggling with depression, bipolar disorder, anxiety, panic attacks, or less frequently, schizophrenia, is a shameful secret that is killing American men every day.

Suicide is the eleventh leading cause of death in the United States and 90% of men who take their lives are battling mental illness.

But telling your girlfriend, your wife, your partner, your family and your friends, although it’s scary (these people may literally run or disappear from your life), is a critical first step in not only acknowledging your own illness but also in seeking the much needed support which can help you get well.

When you’re battling cancer, there’s no issue at calling in the troops: girlfriends, wives, family, friends, and your entire support system, including colleagues and employers. But as someone once told me,

“Mental illness is not a casserole illness; don’t expect people to be stopping by with food.”

People stay away because of their lack of knowledge and fear of mental illness, but it should not get in the way of your sharing your battle with people who can really be of tremendous support.

During my crisis years, nobody knew anything was really wrong with me and I actively hid my illness from people. I was experiencing a wild roller coaster ride of euphoric highs and desperate lows that constantly put my life in jeopardy, but my disability was invisible. And I preferred it that way.

Granted, I was behaving erratically, flying from New York to Tokyo to Paris on business three to four times a month, counterfeiting art, and smuggling tens of thousands of dollars back into the United States. At the same time, I was drinking heavily and indulging in drugs and alcohol as a way of self-medicating my mental illness, engaging in sex with complete strangers I met in bars and clubs, staying up for days on end, and in general living on the edge.

Yet the disability itself remained invisible to family, friends, and colleagues. I so wanted to share this secret with so many people, but this was an abstract and invisible illness and I didn’t have a clue as to how to explain it.

I was also convinced I could beat my mental illness by engaging in compulsive diet and exercise, thinking somehow that I could “find a balance.” But despite how many sit-ups, pushups, and hours I spent in the gym on the treadmill and lifting weights, I wasn’t getting better. In fact, I was getting much worse.

People were convinced I was functioning just fine because I was efficient, productive, and successful. I had everybody fooled with my illness. While my bipolar disorder remained undiagnosed, I secretly wished that my disability would be a physical one, one which people would actually notice.

I wished for a broken arm that people could see. Maybe people would be supportive and help me if I had diabetes or, God forbid, cancer. Maybe I needed to show up to the next family function in a wheelchair to get somebody’s attention.

Once I was diagnosed, though, and given what I referred to as my “death sentence,” things changed quickly. No, my family and friends did not come rushing to my side to support me in battling against my illness. It was only a fantasy of mine that this was going to happen.