The Seven Types of People In The World: Which One Are You? 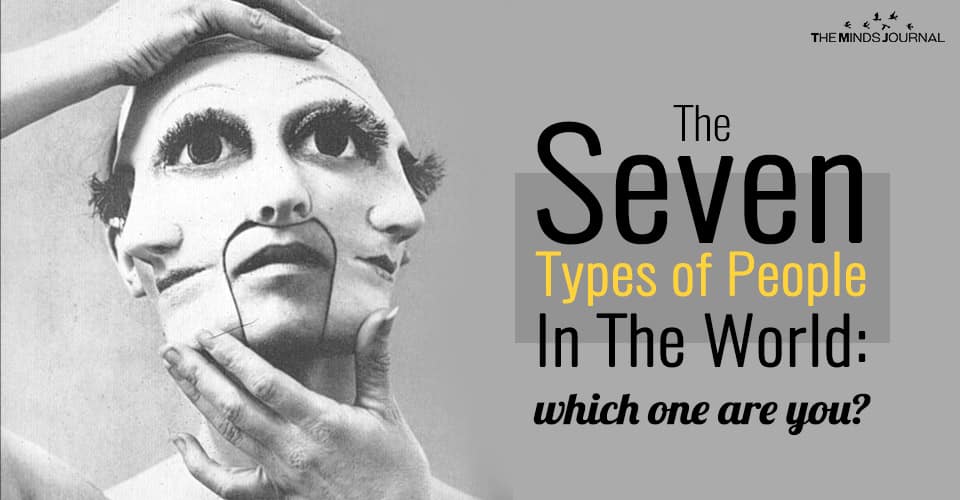 According to one of the most famous poems in the world, there are seven types of people who exist amongst us. Which one are you?

7 Types of People Experiment: Imagine the House is on Fire

Excerpt from The One Idea That Saves the World: A Call to Conscience and A Call to Action by Laurence Overmire.

The House is on Fire. The people in the house are
Sleeping and in great danger

Person #2
Sees the fire
But, not wanting to get involved
Walks on by

Person #3
Sees the fire
But, shocked and terrified
Is left immobilized in a state of panic

Person #4
Sees the fire
And immediately takes action
First, phoning the fire department
Then, knocking on the door to
Wake up the inhabitants

Person #5
Sees the fire
And, daring what no one else would
Enters the house to try to
Save the inhabitants

Person #7
Set the fire
And lurks unnoticed
Watching the destruction
Not caring really
About anything at all.

_ The house is Mother Earth.

7 types of people: Which person are you?

This poem encapsulates the central, overriding issue of our time: our world is on fire and on the verge of collapse; what are each of us willing to do about it? How do we galvanize people to do what is necessary and right?

Of course, very few of us are willing to risk our own lives to do good in this world, though we are eternally grateful to those who do. But let’s try, all of us, to do our best to be number 4’s. Let’s help to put out the fire.

Unfortunately, one of the biggest problems at this particular point in time is that there are too few people who are working hard to douse the flames. Most people are 1’s, 2’s or 3’s.

The 1’s are the people who don’t even see that the house is on fire.

They don’t really understand that there is a problem. They live in ignorance of the situation, consumed with the trials of everyday living. We must wake them up, educate them and ask them politely to help us put out the fire. After all, most of them are decent people. They are your friends and neighbors.

The 2’s are perhaps the most frustrating.

There are an awful lot of them out there. Most we would consider good people, but good people don’t always do the right thing. They know that the world is on fire, but they refuse to help in any way to put it out. They just don’t want to make the effort.

Are they lazy? Some perhaps. Apathetic? Yes, some are just too comfortable and want to live their lives in a self-centered kind of way without bothering about the larger community. Some are just too jaded and cynical, believing that there is nothing they can do that will make any difference. Their negative outlooks defeat them before they even make an attempt to rise to the challenge.

These are never the people we look up to. They are not the people who inspire, the people who win our respect. Throughout history, they have won plenty of shame, but no acclaim. These are the people to whom we must say, ultimately, “If you can’t lend a hand, please get out of the way.”

They understand the world is in trouble. They have some knowledge of what is happening. Some know too much, perhaps, and are paralyzed with fear, not knowing what to do. Some just don’t have the psychological or emotional fortitude to cope with the enormity of the issues, so they avoid thinking about them or dealing with them in any way. We must help them to overcome their fears and persuade them to join us, as much as they are able, to help save the world.

The 4’s and 5’s are the people who conscientiously give of themselves to help others.

We need more people like this. This book, hopefully, will convince you to become one (if you’re not one already).

The 6’s and 7’s, on the other hand, are the people who are really causing problems for those of us who are working to put out the fire.

The 6’s are the opportunists who take advantage of the injustices of the world to serve their own selfish interests.

Usually, they are profiting in some way from the misfortunes of others. Often, these are not the nicest people you will ever meet. Many convince themselves that kindness, compassion, generosity and other human virtues are just silly notions for those who are naive. Thereby, they rationalize their destructive, harmful behavior as being “the way the world works.” Their big, big egos tell them they are superior to everyone else. As such, they are living a lie, not the truth.

Have you ever encountered people like this? Read Psychology Of Mean People And How To Deal With Them

The 7’s are the people who are deliberately setting the fire.

They may even be throwing gas on it. They are knowingly involved in activities that are harmful to other people, other creatures and the planet itself. The 6’s are often their minions. The 7’s are not nice people either. Some would call them sociopaths. Some would call them evil. I prefer to think of them as spiritually ill. They are not well. They are suffering. They are living in ignorance of the fundamental truth of the One Idea. If we are going to heal them, and in turn ourselves, we must offer them our kindness, love, compassion, understanding, and forgiveness, for our own sake as well as theirs. Why? Because we must be true to the One Idea, the path that will lead us to a healthy place.

You’ve heard the saying, “the world is at sixes and sevens,” meaning the world is in a state of confusion and disarray. Indeed it is.

The 6’s and 7’s like it that way because they are profiting from it. The rest of us, however, are in danger of being consumed by the fire. Ironically, in the end, the 6’s and 7’s will also be consumed. No one wins in this scenario. Everyone loses.

The society consists of different kinds of people, both good and bad. It is up to you to decide which one you want to be. Be a good person and help society become better or contribute to the existing chaos?

If you want to know more about human nature and how different they are from each other, then you might find this video interesting: