3 Steps To Heal Self Criticism As A Highly Sensitive Person 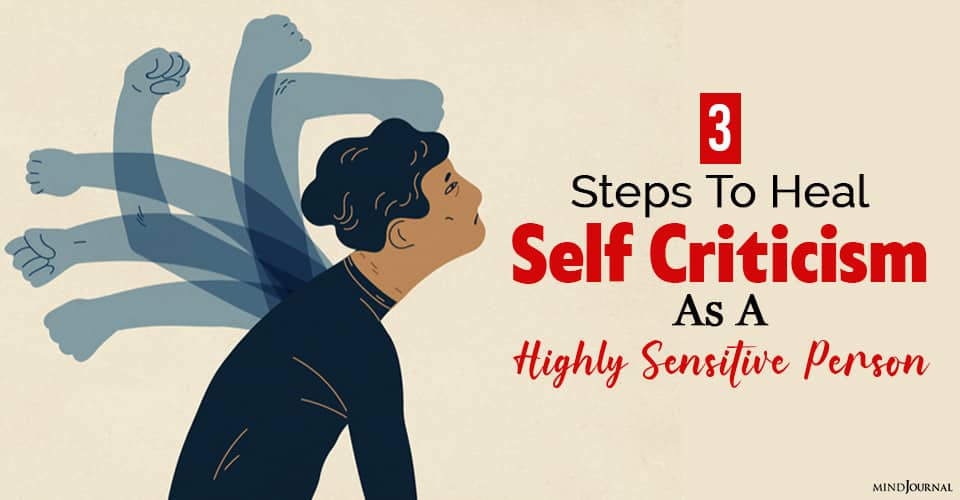 You are highly sensitive, also addressed as an HSP, aren’t you?

If a couple of the above seem like they’re a match for your inner world, then it might mean that you’re a Highly Sensitive Person (HSP).

The term first appeared in literature when psychologist Elaine Aron coined it along with her husband Arthur Aron. The two also were instrumental in developing the Highly Sensitive Person Scale questionnaire, to create estimations about the rate of responsiveness to stimuli, both internal and external.

Aron gave birth to the idea of Sensory Processing Sensitivity (SPS), which looks at increased sensitivity to the nervous system and a more in-depth cognitive processing of stimuli. A person with a high measure of SPS is thought to be an HSP.

According to Aron, SPS tends to leave a person with the ability to experience more nuanced feelings to even subtle stimuli. SPS also indicates more intricate processing to come up with coping mechanisms in emotional situations.

Now, come to think of it, being an HSP is essentially a double-edged sword.

As an HSP, it is also likely that you are able to detect more nuances, subtleties, and undercurrents in scenarios than others. It’s just this constant overwhelm that can make life difficult for you to negotiate.

A long-term struggle between the internal and external also creates larger shadows for Highly Sensitive People. For many, this has been the status quo from the time they were young. Even as they grow up, they notice how their difficulties in regulating their responses don’t subside.

Related: Why Highly Sensitive People Get Bullied In Life

Is it then any surprise that for many HSPs becoming critical of the self is but a natural response?

In 2014, when I read Elaine Aron’s book, I was astounded at how every word in it spoke of a truth that my felt-sense had detected, but that which I found difficult to articulate.

HSPs are known to be sensitive to external stimuli, which Aron has linked to them being more empathetic to non-HSPs.

In fact, in a study named “The Highly Sensitive Brain”, Elaine Aron, Arthur Aron, and other researchers working with them noted that HSPs tend to be more tuned into the expressions of their spouse.

In terms of internal stimuli, Dr. Aron has outlined the depth of processing and overstimulation as being reasons. For example, an HSP could focus more on sounds and ideas and make comparisons to a degree much higher than a non-HSP in the same situation.

I realized I had been an HSP all along and I needed literature like that for me to come to terms. I also became more aware of inner voices that passed critical judgment without any respite.

In time, I developed some mechanisms to work with these traits that I have now accepted as part of my personality. Some of those are what I am going to share with you in this write up.

I remember the time I believed I can be critical only of other people. To that extent, I was aware of how I could pass value judgments or dismiss them as soon as I found their worldview didn’t match mine.

What took me more time was to come to terms with how I saw myself.

The discovery was at once sad and shocking, because here I was putting the context outside of me, whereas in truth, it lay within!

I still remember the first time I drew the amalgam of inner voices that seemed sensitive, critical and unsavoury. I drew just a black mass of soft pastel.

The experience was thoroughly moving but it made me want to look at the different strands of self-criticism more deeply. In the subsequent days, I drew more and I took to free writing as expression.

I found the courage to lock myself up in a room and give myself the time I needed to hear myself out. In the months to come, I saw through the stories I had developed for myself. I also took inputs from others as they experienced me. I realized it had all gone into making that dark black mass.