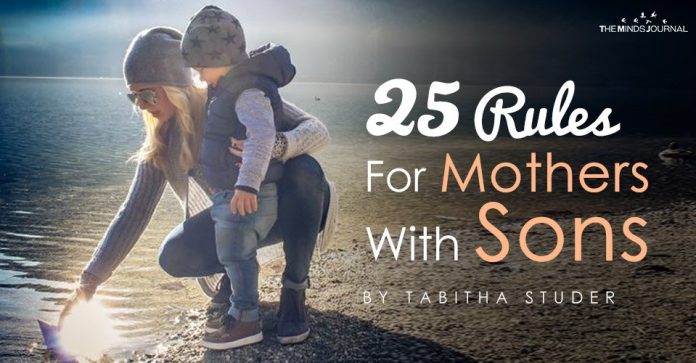 25 Rules For Mothers With Sons

Being mothers of sons is all about being their best friends.

Inspired by a Pin I’ve recently seen about “rules for dads with daughters,” I went searching for a similar list for moms with sons.  This search was mostly fruitless, so I was inspired to write my own Rules for Moms with Sons.

Granted, my list will not be conclusive and may not be entirely uncontroversial.  So agree, or disagree, or take with a grain of salt – but I hope to inspire other moms who are loving, and struggling, and tired, and proud, and eager to support the boys in their lives.

You are the most important woman in his life, his first teacher, and the one he will look to for permission for the rest of his life.  From “Can I go play with them?” to “Should I ask her to marry me?”

Here are the 25 rules for Moms with Sons: 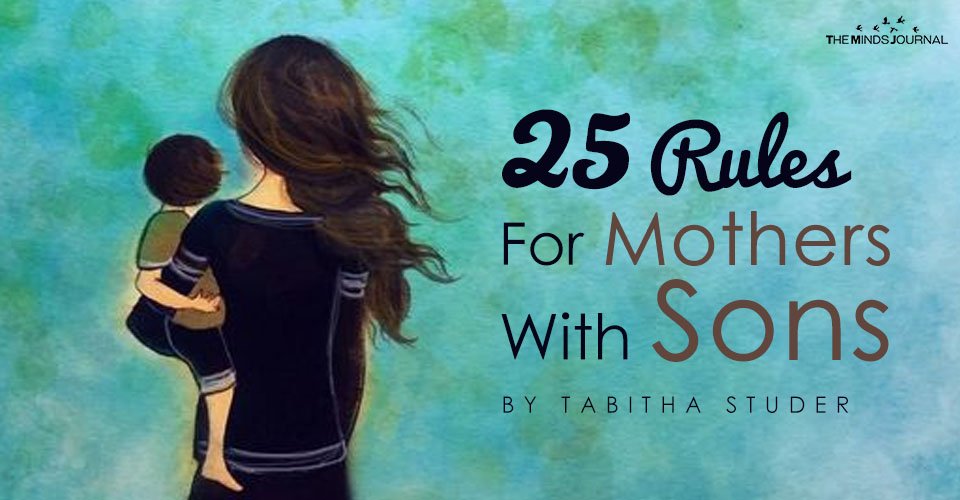 1. Teach him the words for how he feels.

Your son will scream out of frustration and hide out of embarrassment.  He’ll cry from fear and bite out of excitement.  Let his body move by the emotion, but also explain to him what the emotion is and the appropriate response to that emotion for future reference.  Point out other people who are feeling the same thing and compare how they are showing that emotion.  Talk him through your emotions so that someday when he is grown, he will know the difference between angry and embarrassed; between disappointment and grief.

2. Be a cheerleader for his life

3. Teach him how to do laundry..and load the dishwasher, and iron a shirt.

Emilie Buchwald said, “Children become readers on the laps of their parents.”

Offer your son the opportunity to learn new things, believe in pretend places, and imagine bigger possibilities through books.  Let him see you reading…reading the paper, reading novels, reading magazine articles. Help him understand that writing words down is a way to be present forever.

Writers are the transcribers of history and memories.  They keep a record of how we lived at that time; what we thought was interesting; how we spoke to each other; what was important.  And Readers help preserve and pass along those memories.

5. Encourage him to dance.

Dance, rhythm, and music are cultural universals.  No matter where you go, no matter who you meet – they have some form of the three.  It doesn’t have to be good.

Just encourage your son that when he feels it, it’s perfectly fine to go ahead and bust a move.

6. Make sure he has examples of good men who are powerful because of their brains, their determination, and their integrity.

The examples of men with big muscles and a uniform (like Batman and LaMarr Woodley) will surround your son from birth.  But make sure he also knows about men who kick a$s because of their brains (Albert Einstein), and their pen (Mark Twain), and their words (Dr. Martin Luther King Jr.), and their determination (Team Hoyt), and their ideas (The Wright Brothers), and their integrity (Officer Frank Shankwitz), and fearlessness (Neil Armstrong), and their ability to keep their mouths closed when everyone else is screaming (Jackie Robinson).

7. Make sure he has examples of women who are beautiful because of their brains, their determination, and their integrity

The examples of traditionally beautiful women (like Daphne Blake, Princess Jasmine, and Britney Spears) will surround your son from birth.  But make sure he knows about women who are beautiful from the inside out because of their brains (Madame Marie Curie), and their pen (Harper Lee), and their words (Eleanor Roosevelt), and their determination (Anne Sullivan), and their ideas (Oprah Winfrey), and their integrity (Miep Gies), and fearlessness (Ameila Earhart), and their ability to open their mouths and take a stand when everyone else is silent (Aung San Suu Kyi).

Tabitha Studer
Hi. I’m Tabitha. I’m a mum to four, wife to my favorite human, and a high school Spanish teacher. I strive to be kind, grateful, and intentionally inspired each day.
-Adverts-

Parenting during a pandemic is tough. Here's how to help your kids become emotionally intelligent and resilient
Read more
Entertainment

These Ted Talks are sure to ignite their passion and move them to think differently. All the videos are inspiring, engaging, and motivating.
Read more
wpDiscuz
0
0
Would love your thoughts, please comment.x
()
x
| Reply