8 Repellent Turn Offs For Men To Avoid At All Costs 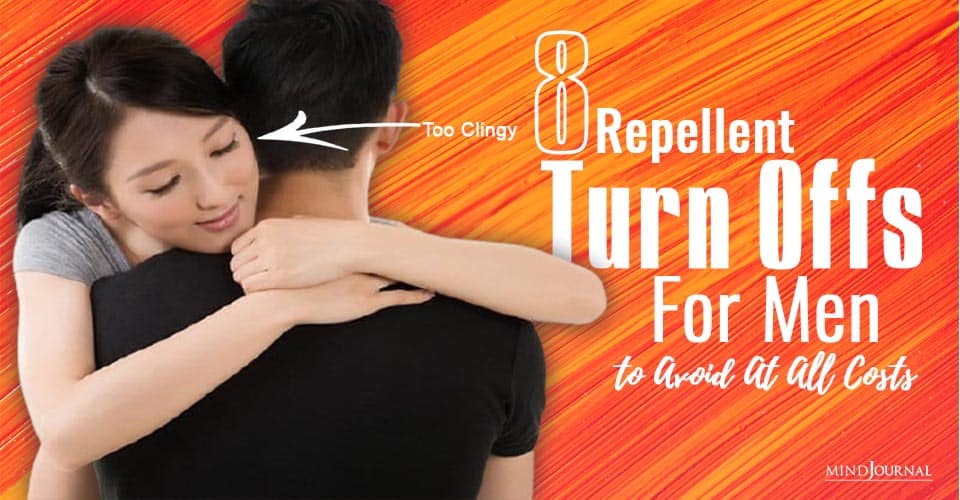 In every relationship, there are always some do’s and don’ts to maintain a healthy, long-lasting relationship. To understand men, it’s crucial to know about the things that actually repel them. Now, we all are (kind of) familiar with the attributes that attract a man but what are the things that are the major turn offs for them?

Today, I’m going to give you my special annual edition of turn-offs for men. That’s right. I’m going to show you what 99.9% of all men are turned off if you say this or do this.

If you’re not careful with your communication, you might turn the guy off if you say the wrong thing.

You don’t want him to think that you’re being a jerk, and you sure as hell don’t want to scare him off if he’s a good catch, right?

CHANCES ARE YOU’RE NOT TRYING TO TURN HIM OFF, RIGHT?

At least I hope not anyway. You’re probably doing your best to be charming, delightful, and sexy for him but it’s certainly possible to say something that might make him give you that confused-tilted-dog look that says you might have bunked it up a little bit.

Right now we’re going to take a look at the things that really make men step back and think twice about you. Let’s avoid turning men off if at all possible, right?

Let’s talk about turn offs for men to avoid.

If you only thought guys could be arrogant, you’d be very, very wrong.

I’ve been on dates with women that talked non-stop about who they know, how important they are, how impressed I should be with them yadda, yadda, yadda, and it’s really gross.

It’s super gross to listen to a woman talking arrogantly.

Not only is it revolting to listen to somebody trying to force you to like them because of who they think they are, but it’s also something we associate with guys who are kind of douchebags.

When guys do this kind of bragging and boasting and being arrogant, it’s yucky enough.

When a woman does this, guys are just as turned off.

Related: The One Reason Why You Push People Away Based On Your Zodiac Sign

This is one that isn’t too far from arrogance if we’re being perfectly straight with each other. Entitlement is the arrogance of “I deserve it just because.”

This comes up and it has been in my history as well. I had a woman who literally stiffened up and gave me a speech when the check came to the table when we’re on a date and that it was my duty to pay.

Never mind that I was gladly going to pay the check but she wouldn’t even give me the opportunity to show her my intentions on my own.

That woman never saw me again.

Now, maybe her goal was a free meal. I mean she was a sweetheart, she’s been burned too many times but she could have had so much more without that entitled attitude.

There’s a big difference between a healthy feeling of your own self-worth and the attitude that things should just fall into your lap. It should just be given to you because you deserve them.

The shame is that those who really deserve it never usually put that on the people around them. They just let the deserving manifest itself naturally.

I’ve been on quite a few dates where the girl I was with just couldn’t hold her own in a conversation. This was usually not the norm, but it has happened enough that I thought I’d figure out what the heck was going on with it.

Sometimes it’s shyness on her part, sometimes it was as though she expected me to entertain her and that’s why she was being quiet like she was my audience or something, I don’t know.

Sometimes I’ve noticed a certain level of disconnect where she had no clue that talking to a guy really doesn’t involve a degree or night school or training of any kind.