10 Reasons Why You Need Not Forgive And Forget 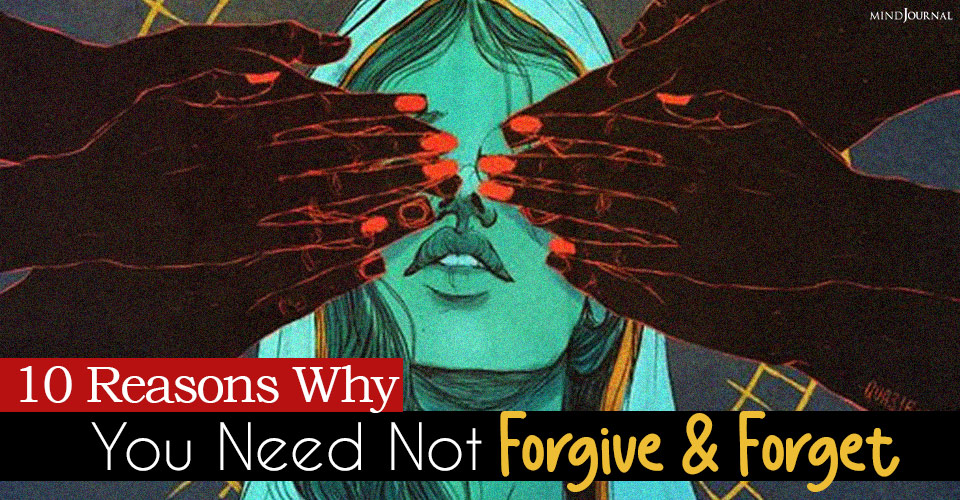 “It is not okay to ‘live and let live,’ to let ‘bygones be bygones,’ to ‘forgive and forget,’ to let the ‘past be the past’ or any of the other clichés your family and friends will try to persuade you to forget about what happened and to move on. Try not to accept these messages.” ― Beverly Engel

It sounds so simple, right, and light.

“Forgive and forget” shimmers like an insta-cure: two poetically paired commands, half-homophonic and alluringly alliterative, tied up neatly with a pseudo-Buddhist bow.

But for some hearers—especially for anyone who has been interpersonally traumatized—attempting to address and finesse this suggestion often backfires.

“Forgive and forget” can be the worst advice. Here’s why.

Related: Why You Don’t Always Need to Forgive

10 Reasons Why You Need Not Forgive And Forget

We aren’t discussing amnesty for random pranksters but for life-wreckers whose conscious, constant actions spurred crippling anxiety, depression, addiction, suicidality, and other issues in victims to whom the idea of forgiving and forgetting—wiping the slate clean—feels like becoming accomplices in their abusers’ crimes.

2. Half Of It Is Patently Impossible.

Human brains cannot voluntarily forget. Maybe we can learn to blunt or blur terrible memories, but, try as we might, they cannot be erased.

Telling someone to forget is like telling them to fly. Even so, people with low self-esteem tend to hate and blame themselves for being unable to perform even patently impossible tasks.

Those who were traumatized behind façades of apparent normalcy, luxury, and/or love often feel paralytic guilt even for thinking thoughts that seem disloyal or ungrateful.

Laboring over the math of absolving those whom they still feel unauthorized to blame—But she took me to France!—can undermine or delay recovery and sustain shame.

Forgiveness is typically framed as a wholesome, holy healing strategy that liberates forgivers as much as it does the forgiven.

But sensitive hearers can discern when “Forgive and forget” not-so-secretly means: “I’m sick of your issues and of hearing you talk about your trauma. I’m out of patience. Get over it. Grow up. Shut up.”

Related: Can You Forgive Someone Who Has Not Directly Hurt You?

Trauma survivors often struggle to feel anything at all. For those who have struggled hard to finally name and aim their rage and pain, such emotions are sources of strength, like electrical currents linking long-silent stations.

For them, the prospect of forgiveness threatens to devalue this sense of victory, reality, and emerging identity.

Someday one might choose to forgive (but not forget). Someday one might feel saintly, strong, or over-it enough to give one’s harmers this amazing gift. That’s what it is: neither an obligation nor a forfeit but a gift. Remember this. Maybe that day is not today.

Weighing that gift’s huge personal, historical, spiritual, and even legal implications helps trauma survivors recognize themselves as choosers, do-ers. Flexing this awareness, reserving that choice, is as fortifying and thrilling as training for a new sport.

At least, sometimes. Anyone who has been trauma-trained to be hypervigilant in detecting and assuage others’ emotional cues will hear “Forgive and forget” as a declaration that it’s the only good choice—thus that its deliverer will condemn as cold, cruel, stubborn, stupid, selfish, or otherwise bad whoever is unwilling or unable to comply.

Related: 10 Questions To Ask Yourself Before You Forgive Your Cheating Partner

9. It’s Just Another Command In A Life That’s Been Crushed By Commands.

Those who spent years being intimidated into obeying instantly and uncomplainingly still do, their fawning reflex and terror of punishment overriding any desire to decline. Refusing to forgive and forget is, in some senses, a valiant gesture of resistance and protest for their own sake.

Yes, some abusers meant no harm, and many were themselves abused. Does that exonerate them? They made choices. So can we.

The secret is: One can move on without forgiving them. Forgiveness is neither a sine-qua-non requirement nor a prerequisite for progress, happiness, recovery, and/or accomplishment. Sometimes the exact opposite is true.