Why You Don’t Always Need to Forgive 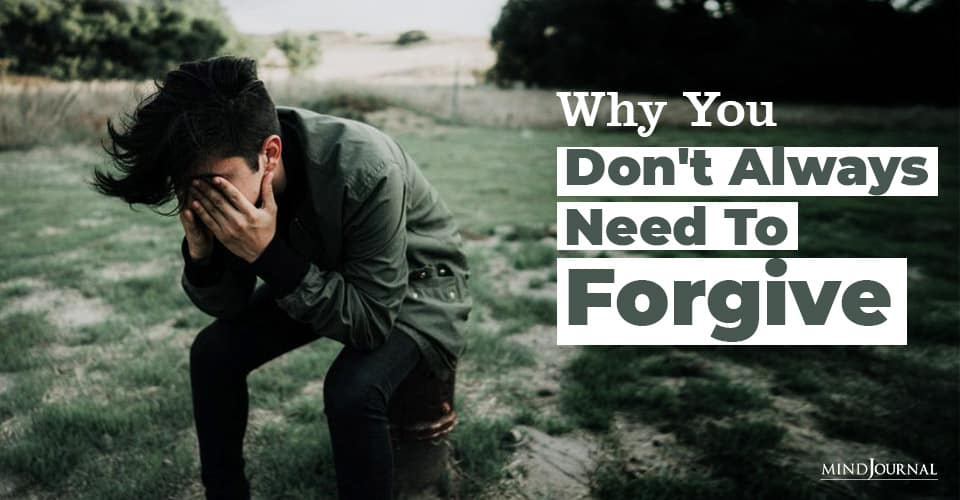 Being forgiving is an important and strong virtue to have. But sometimes, you don’t always need to forgive, and that doesn’t make you weak or bitter in any way. Forgiveness can be freeing, but not everyone deserves it.

Among the blog posts I’ve written, one of the most popular remains “Why We Need Closure.” I think the reason is because it details the painful experiences that come from not knowing why a relationship has ended, not knowing with certainty or clarity our fault in it nor the fault perhaps intrinsically in ourselves that caused it, or, perhaps worst of all, not knowing how to pick up the pieces, despite seeing in them some glimmers of hope.

In a similar vein, when in pain caused by circumstances beyond our control, whether romantic or not, we are often told to “forgive.”

Forgiveness, according to Webster’s, is “to cease to feel resentment against (an offender)” or “to give up resentment of or claim to requital for forgiving an insult.” As a verb, it is a loaded concept, involving some major components which shape our self-image, like responsibility, character, and morality. To be told to forgive, then, is to be told to act in a certain way, as if, in doing so, not only do we absolve the wrongdoer in our lives, but also ourselves.

Within popular advice, we’re told forgiving whatever betrayal we’ve endured holds the promise of setting us free from the past, from our pain, and from whatever memories ail us.

In my estimation, however, when we find ourselves in the trenches of deep and muddied emotion derived from whoever or whatever betrayed us, believing that the only possible absolution is to forgive paves a dangerous path: If we feel we cannot wholeheartedly forgive, we are then marred by guilt and shame, feeling wrong for not knowing how or being able to forgive, thereby further sinking us into a state of despair.

Related: Understanding The 4 Stages Of Forgiveness

The truth is, in some situations, you don’t need to forgive, particularly as forgiveness is a complex psychological phenomenon, involving both situational and individual factors.

For instance, according to two studies by McCullough which explored forgiveness, vengefulness, and other factors, low agreeableness, and high neuroticism were found to be associated with vengefulness, which was also related to (a) being less forgiving; (b) greater rumination about the offense; (c) higher negative affectivity; and (d) lower life satisfaction. Some people seem to be simply more capable of forgiveness based on their personality.

From a less deterministic perspective, forgiveness can also be situationally based. A good example of this is how much easier it is to forgive when true remorse by a wrongdoer is shown. The reason, I hypothesize, may be evolutionary: Remorse suggests that a person recognizes his or her wrongdoing. The recognition itself is mere evidence of salvation: By recognizing cognitively the hurtful action, and apologizing for it, the wrongdoer acknowledges his or her role and responsibility for hurting another person.

The belief that the wrongdoer would betray again is low, given the acknowledgment or action and pain that they too have suffered, therefore being unlikely to put not just another, but themselves in that situation again.

But what if there is no remorse is shown or acknowledgment of the wrongdoing done? “Forgive them, for they know not what they’ve done,” are the words purportedly uttered by Jesus before his crucifixion. This compassionate example displays that forgiveness is possible through empathy, suggesting that if one is unaware of the consequences of their actions, or the resultant pain caused, forgiveness is warranted.

What does not warrant forgiveness, however, is true malevolence: When there is no remorse shown, nor ignorance to blame, but a person has received satisfaction from another’s pain, forgiveness is unnecessary. Acceptance, however, is. (In the case of child abuse, this concept is outlined well in Susan Forward’s book Toxic Parents.)

For many, it can be difficult to recognize that someone close to us could have acted malevolently toward us, taken pleasure in our pain, and continued being hurtful despite having nothing to gain except self-satisfaction. When clients tell me of travesties they have endured, and how cruelly they have been treated, particularly in cases of child abuse, the idea of forgiveness often comes up, usually independently: “I know I need to forgive…” or “I don’t know how I can forgive.”

These words are powerful because within them lies a concept which attacks the will of the hurt individual, including his or her self-concept, self-esteem, and understanding of the world, people, and, indeed, themself. Is there a need to forgive? No, there is a need to understand and to accept, and there is a need to hold the wrongdoer accountable, if even by laying the blame where it ought to be in conversation with a therapist or friend.

Related: 4 Simple Tips To Practice Forgiveness and 4 Ways To Go About It

Forgiveness is an emotional and psychological phenomenon that likely carries evolutionary weight, allowing us to function in a society built on trust.

In most cases, forgiveness is healthy, needed, and recommended. Sometimes, however, there’s more power in not forgiving, but learning from encounters of malevolence, growing, and moving on.

The next time you struggle with forgiveness, stop, and think about who is on the other side. Malevolent and toxic people don’t deserve your forgiveness. Forgiving someone can be freeing, but when it comes really bad people, just forget about them and move on with your life.

1 thought on “Why You Don’t Always Need to Forgive”