Deep Insightful Quotes By Keanu Reeves About Love and Life 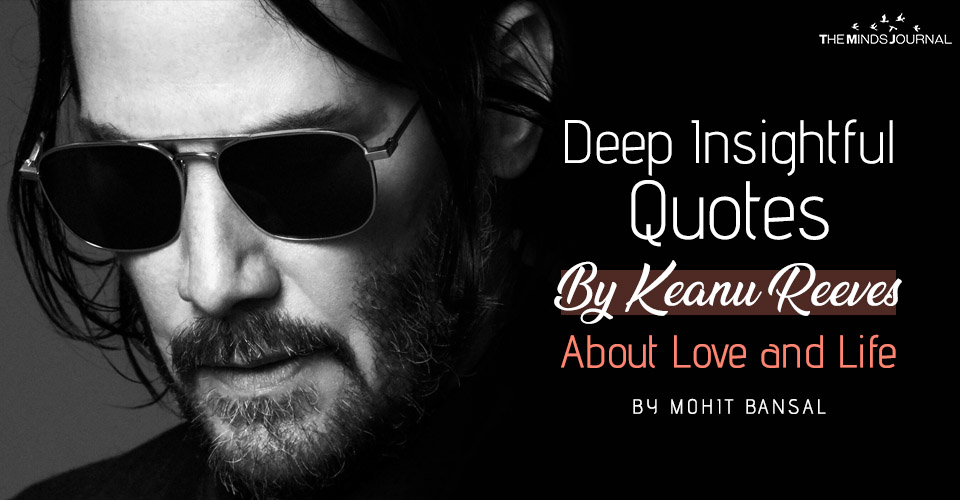 The matrix superstar didn’t just stop there. He kept making amazing blockbusters such as the John Wick series and now he’s going to star in a video game Cyberpunk 2077.

Keanu Reeves has inspired a lot of people with his life and has learned a lot from it himself. He is known as one of the most down to earth and influential people of this generation and it’s hard to say if anyone dislikes this charming fella.

Much like many other inspirational people, Mr. Reeves has said a lot of things that can hit hard on both mind and heart. Keanu Reeves has lived what you would call a challenging life and his quotes reflect how much wisdom he has gained after triumphing regardless of those challenges.

Here are some quotes by Keanu Reeves that hold the potential to change the way you think:

Coming from someone who has been through a lot in his life, this quote has a lot to it. Here, Keanu refers to all the challenges he had to face in his life even after becoming a successful and popular celebrity. He wants to say that no matter how much you try to run away from grief, it’ll find you in some other ways, however, it won’t ever end.

So, the best thing to do is, just get over the grief you are facing and keeping living the way you want to. There’s more to live for than there’s to grief about.

2. The simple act of paying attention can take you a long way

One of the biggest mistakes a human makes in his/her life is not paying attention if they are doing or learning something. If only we just pay attention to what we are doing and what is going on in front of us, we can gain a lot of knowledge.

Not only will this improve our potential, but also the result of the work we do. It’s mind-boggling how a simple act of paying attention can get you where you want to go in life.

3. Falling in love and having a relationship are two different things

This is one of my favorite quotes by Keanu Reeves. He explains the biggest misconception about relationships nowadays. Most of the people come in a relationship just ‘not to be single anymore’.

They don’t realize the real meaning of love and give their relationship the tag of love. And then after a few months, we see them dating other people. I’m sorry, that’s not what love is. Love is something that happens once and never leaves you. Your lover might, but love won’t.

4. Here comes 40. I’m feeling my age and I’ve ordered the Ferrari. I’m going to get the whole mid-life crisis package

This quote isn’t just funny. It can teach us a lot about the way we live. This gesture reflects that Keanu Reeves lives in the present. That’s it that’s the lesson here fellas.

5. When I don’t feel free and can’t do what I want I just react. I go against it

We can learn a lot from this quote. Just like Keanu, we should do what we want to. I mean, follow our passion and if there’s something in the way, we must react.

You are here to find your purpose in life and be what you want to be. So, don’t waste your time on things you don’t want to do and do what you really feel like doing.

Read Keanu Reeves Has A Powerful Message For The World

6. Sure I believe in God and the Devil, but they don’t have to have pitchforks and a long white beard

This is a brilliant quote that tells us about the different perspectives of looking at things. Didn’t get it? Let me explain. The basic pictures of god and the devil have been created with the perspective of a single human. It’s not necessary that the devil has horns or god has a long white beard as nobody has ever seen either.

Hence proved, that we shouldn’t just believe what people tell or show us. We must learn to look at things from our own perspective.

Keanu Reeves might represent himself as a person who doesn’t know much but he actually is a man who’s words and actions can inspire a lot. I would say he is clever for saying things like “I’m a meathead. I can’t help it, man. You’ve got smart people and you’ve got dumb people”.

This shows that he is a down to earth man and we can learn a lot from him. Even this quote teaches us something. It tells us never to think highly of ourselves no matter how great we might become.

Keanu Reeves truly is a great and inspirational man.

Mohit Bansal Chandigarh is a keen photographer and traveler. It’s hard to say whether he travels to click photos or he clicks photos so he can travel. He’s passionate about photography for sure and does like to travel a lot. Probably he’s travel is the reason for some of his iconic clicks. When he’s not busy clicking pictures or when he’s idle at home, find him on http://mohitbansalchandigarh.inView Author posts