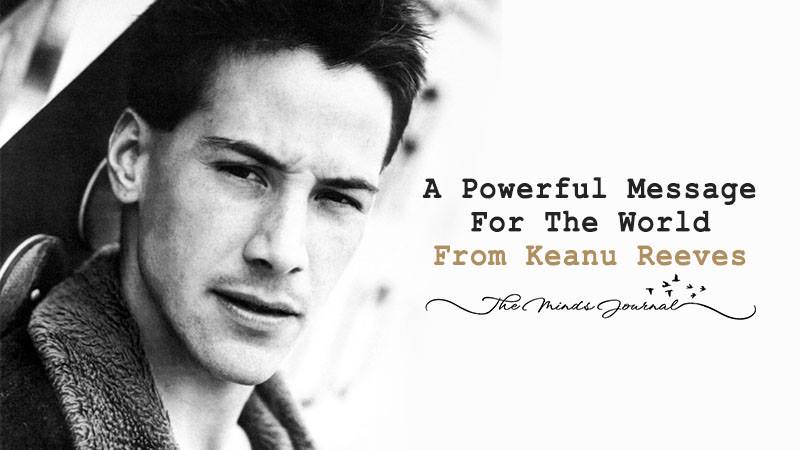 Keanu Reeves Has A Powerful Message For The World

Keanu Reeves has long been known to be a stellar actor, one who can play serious and hilarious roles. Something else he’s becoming known for is his wisdom. It’s not something you often find in celebrities.

Every few months, he gives the world the gift of his thoughts. And now I’ll leave you with them. Enjoy. I hope you take from it what I did.

“I cannot be part of a world where men dress their wives as prostitutes by showing everything that should be cherished. Where there is no concept of honor and dignity, and one can only rely on those when they say “I promise” .

Where women do not want children, and men don’t want a family.

Where the suckers believe themselves to be successful behind the wheel of their fathers` cars, and a father who has a little bit of power is trying to prove to you that you’re a nobody.

Where people falsely declare that they believe in God with a shot of alcohol in their hand, and the lack of any understanding of their religion.

Where the concept of jealousy is considered shameful, and modesty is a disadvantage.

Where people forgot about love, but simply looking for the best partner.

Where people repair every rustle of their car, not sparing any money nor time, and themselves , they look so poor that only an expensive car can hide it.

Where the boys waste their parents money in nightclubs, aping under the primitive sounds, and girls fall in love with them for this.

Where men and women are no longer ago identifiable and where all this together is called freedom of choice, but for those who choose a different path-get branded as retarded despots.

I choose my path, but it’s a pity that I did not find similar understanding in the people among whom I wished to find it most of all  “