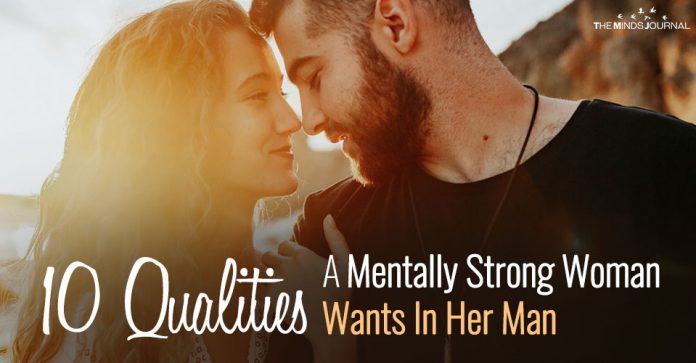 10 Qualities A Mentally Strong Woman Wants In Her Man

It takes a strong man to love a strong woman. Women who are mentally strong need their men to be able to handle the fire that burns inside them. She wants her man to appreciate her untamed, wild and independent spirit and grow along with her.

What A Mentally Strong Woman Wants In Her Man

There are genuine, caring, loving women in the world who are still strong and live their own lives. They have their own hopes, dreams, and ambitions – but they want a teammate beside them as they accomplish all they set out to.

They understand that personal power is not about not needing someone, but about the ability to set standards and only welcome the people into their life who meet the bar.

They want to support you as you support her in return. But, it takes the right type of man to recognize and be comfortable with this type of woman.

10 Qualities A Mentally Strong Woman Wants In Her Man

1. He is secure in himself.

A man who constantly needs reassurance or validation from the woman he is dating will likely not find what he needs if he pursues a woman who is strong and independent. She will be secure and confident in herself and want the man she is with to be the same. While she will likely show him love and affection because she cares for him and wants him to feel loved – she will not constantly be reminding him of how much she needs him in her life. Because she doesn’t.

A strong man will not expect to be needed by a woman of this caliber, but it is important to note that men still want to feel wanted, and we all still need to love and affection to feel valued in a relationship, so this cannot be overlooked.

This doesn’t mean just knowing how to speak and express his feelings but also knowing how to listen and interpret hers. Not all women are verbally open or affectionate, but they will show you how they feel in their own ways. It is important for a man to be able to hear what the woman in his life is doesn’t say, as well as what she does.

Despite the hard outer shell some strong women display, they are still human beings who experience every emotion. Nobody wants to be stern or serious all the time, particularly those with high-pressure jobs or a stressful lifestyle. A man who can lighten the mood at just the right times will not only be a great lover but a great best friend.

Finding a balance that allows a relationship to flourish when two strong independent people come together is tricky. Men need to understand that they can be with a woman who lives her own life and not sacrifice any of his own masculinity. And women need to understand that being strong and independent does not have to mean being overbearing or abrasive. Men and women are both equally worthy of respect without needing to prove their dominance over each other.

4. He is equally as ambitious as she is.

If a couple is going to have one teammate who has big plans for their own future, it’s going to need two teammates who have big plans. For both men and women, being with someone who is much less motivated in life than you are is going to cause tension in the relationship. One will not understand why the other works so hard. He or she will not understand why their partner is up at 5:00 in the morning to go to the gym. He or she will get aggravated when you have to put in extra hours on that Friday night.