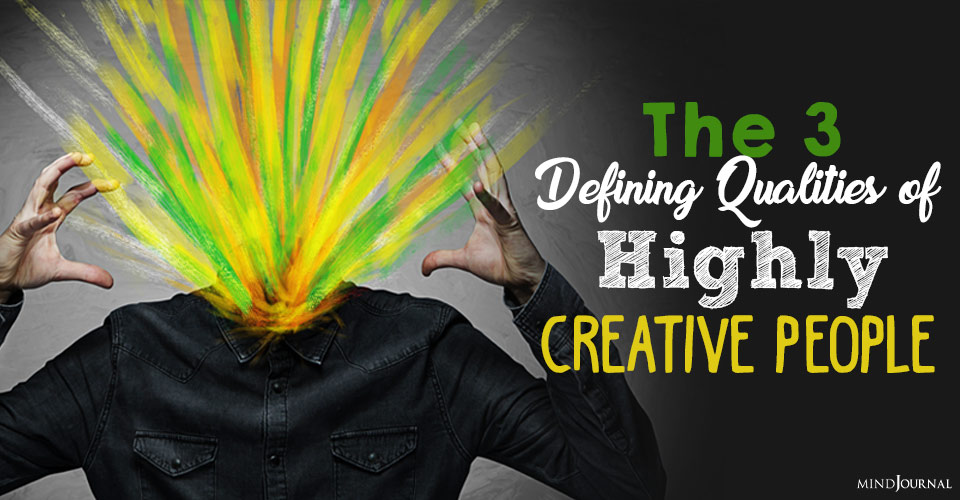 We are all ‘creative’ to some degree as different ideas and imaginations always flash across everyone’s minds. But there are some people who can make use of those ideas to create something in a more precise way. Research says that there are some traits and qualities associated with highly creative people that make them capable to develop their imaginations beautifully.

As life goes on, we tend to lose our creativity. We start to be aware of our limitations and in turn become ashamed and aloof toward that we are not “good” at.

In his book, A Whole New Mind, Daniel Pink posits that as time goes on, our Western World will require more and more creativity. Why? One is because robots and people in China and India can do most non-creative tasks better, faster, and cheaper than we can.  As a result, Pink argues that we need to get creative.

But what does it mean to be creative? More importantly, what are the qualities to be sought to become a highly creative person?

Is creativity set in stone? Is it purely natural or can it be nurtured? As with most if not everything, it’s probably a bit of both.

From their research and the synthesis of many other papers, Fü Rst, Ghisletta, and Lubart, suggest three high-level personality traits that ultimately determine one’s creative abilities. They are:

The term they use is plasticity. This is related to the person”s openness to new ideas and experiences. Highly creative people are curious.  They are interested and inspired naturally which causes them to explore new things and ideas. They are explorers.

The term they use is divergence. Among the 5 personality traits according to OCEAN, divergence implies a low ranking in agreeableness and conscientiousness.  Highly creative people are non-conformists.

Related: 5 Simple Habits That Will Make You A Creative Genius

The term they use is convergence. This refers to the person’s determination and persistence. Ideas are easy, it’s the work that is hard. Highly creative people however not only have ideas but stop at no cost to fully explore them. They are achievers.

When we think of the truly creative, we may be led to think that only 1 or possibly 2 of these character traits is what makes them this way. But research and a bit of thinking instead lead us to believe that all three super-factors are critical.

If we want to be truly creative and make a difference through our creativity, it will require curiosity, non-conformity, and constancy.

Related: Which Side Of Your Brain Is More Dominant? Creative or Logical

If we were to think of some of the greatest creatives of our time, would you not consider Leonardo Da Vinci?

In his biography on Leonardo Da Vinci, Walter Isaacson describes how Da Vinci studied anatomy, dissected, and studied a dead body so that he could better draw and paint the muscles, tendons, and ligaments of the human body (Curiosity).

Isaacson says, “His lack of reverence for authority and his willingness to challenge received wisdom would lead him to craft an empirical approach for understanding nature that foreshadowed the scientific method developed more than a century later by Bacon and Gallileo” (Non-Conformity).

Related: The 5 Most Creative Zodiac Signs – Are You One?

Want to be more creative? Then be more curious, non-conforming, and consistent. Who knows what you may create in the future.

Ryan Lui is a high-performance coach who helps business leaders raise their performance so they can reach their goals. He understands that worthy goals require work and a high-performing person. Therefore, he helps people increase their focus, move forward, and go faster towards fulfilling their great and good goals. Ryan resides in the beautiful Pacific NorthWest. He loves black coffee in the morning, riding his bike through the city, and talking to people about their personality type. Connect with him at ryanlui.com.View Author posts