Why You Might Be Better Off Single: Psychologists Reveal 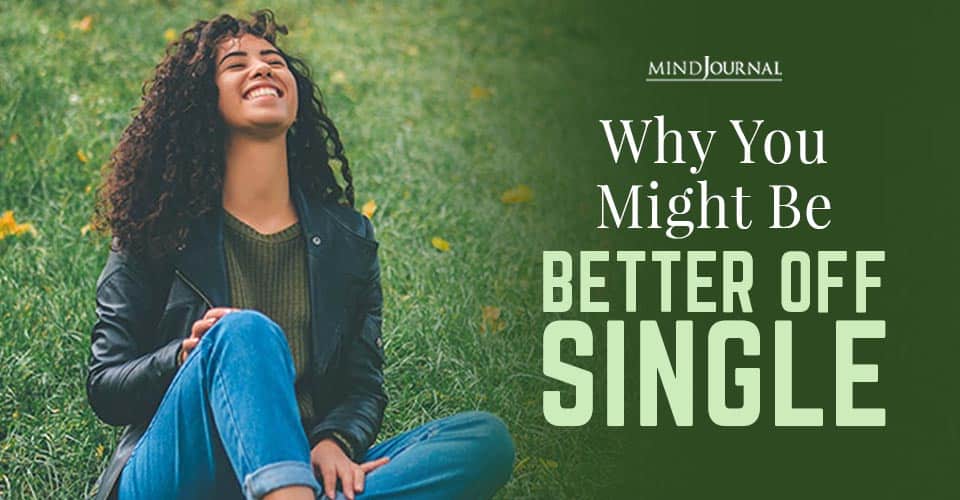 Do you choose to be unmarried? Do you think being single is far better than being married? Then you are on the right track!

But, if still society forces you to feel guilty for your decisions and choices, then here is good news or you

Bella DePaulo, social psychologist claims that you might be better off single.

According to her being single means, you can live your life to the best.  She stressed the point that singles can live the most meaningful and authentic life.

She argues that the whole idea of blissful marriage is a myth.

At the American Psychological Association’s annual convention in Denver, Bella challenged the popular concept that marriage leads to happier and healthier lives.

Related: Why Empaths Prefer To Stay Single and Not in Relationships

She researched the number of married and unmarried people in the UK and US. The results showed that  – in 2014, more than 50% of Americans over age 16, were single. Whereas in 1976, only 37.4% of the population was unmarried according to the Bureau of Labor Statistics (BLS).

As per the reports released in 2019, the number of people aged 16 years and above and married living in England and Wales has decreased in 2018 to 50.5%.  Again, the population of the same age group who live with a partner but never married has increased from 1.3 million people since 2008 to a total of 5.0 million in 2018.

Professor DePaulo. came across 800 studies involving married and single people. The available findings from the comparative studies revealed that single people have a heightened sense of self-determination than their married counterparts.

She further said singles are more likely to experience – ‘a sense of continued growth and development’ as a person,”

As per one study, those who are unmarried and alone tend to engage in meaningful work and another study revealed that they are more self-sufficient than the married people. Unlike married people, singles are less vulnerable to negative emotions.

Based on the research findings, DePaulo says that society ignores or rarely acknowledges the reasons why most people are choosing to be single.

There are many benefits because single people are more connected to their near and dear ones. On the other hand, married people have less time to connect with friends, neighbours, and coworkers. Once you are married you become insular. Being unmarried and alone is a new way of life!

Related: Being Single Is Not Just Okay: But A Blessing In Disguise

However, society thinks that the opposite is true even when there is a lack of evidence supporting the notion that marriage leads to happier lives.

Those who get married are often supported by friends, colleagues and loved ones, while those who single are stigmatized and stereotyped. Because a majority of people aren’t recognising the real strengths and resilience of people who are unmarried and not in any relationship. Unfortunately, we invest too much time and energy in finding “The One”.

DePaulo said, “The preoccupation with the perils of loneliness can obscure the profound benefits of solitude.”

It is time to recognize the benefits of single life and for an accurate portrayal of single people and what makes their lives so meaningful.