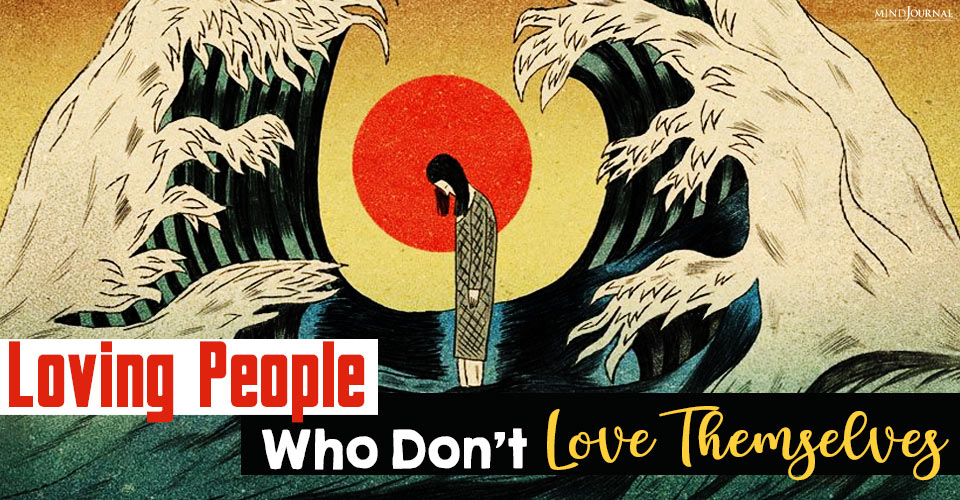 So what is self loathing person in a relationship like?

If you have been with the person for a while, you are probably a very caring and patient person—which is wonderful—but you have to look out for your own well-being as well.

You may derive immense satisfaction and fulfillment from helping your partner, in addition to the love and joy that he or she gives back to you.

Read: How To Heal Your Most Debilitating Core Wounds

If you can honestly regard a partner’s self-loathing as just a quirk you can deal with at little cost to yourself, that’s fantastic. But if you find you are sacrificing too much of your own well-being in service to a partner’s needs; if you’re frustrated from feeling that your caring efforts are wasted; or if you feel that your own needs are being neglected or suppressed, something needs to change.

This may involve starting a dialogue about your concerns, or it could mean you need to leave the relationship. Whatever you do, you cannot let your partner’s needs eclipse your own. However much you care for the person, you aren’t responsible for him or her. Other people’s failure to love themselves should never make you forget to love yourself.

Self hatred is a sad reality for a lot of people, and sometimes also for their partners. But, does that mean that you will give up on love and relationships altogether? NO. As long as you and your partner work together, and are in sync mentally and emotionally, self hatred will always be dormant.

If you have a self hating partner and want to learn more about what causes self-loathing in them, take a look at this video:

Mark D. White is chair of the Department of Philosophy at the College of Staten Island/CUNY, where he teaches courses in philosophy, law, and economics. He has authored over 60 journal articles and book chapters in the intersections between these fields, as well as seven books: Batman and Ethics (Wiley Blackwell, 2019), The Decline of the Individual: Reconciling Autonomy with Community (Palgrave, 2017), A Philosopher Reads Marvel Comics' Civil War (Ockham Publishing, 2016), The Illusion of Well-Being: Economic Policymaking Based on Respect and Responsiveness (Palgrave, 2014), The Virtues of Captain America: Modern-Day Lessons on Character from a World War II Superhero (Wiley Blackwell, 2014), The Manipulation of Choice: Ethics and Libertarian Paternalism (Palgrave, 2013) and Kantian Ethics and Economics: Autonomy, Dignity, and Character (Stanford, 2011). He has also edited a number of books, including The Thief of Time: Philosophical Essays on Procrastination (with Chrisoula Andreou, Oxford, 2010), Retributivism: Essays on Theory and Policy (Oxford, 2011), and Economics and the Virtues: Building a New Moral Foundation (with Jennifer A. Baker, Oxford, 2016). He is the series editor of Perspectives from Social Economics (Palgrave Macmillan) and On Ethics and Economics (Rowman and Littlefield International) and was the principal founder of the blog Economics and Ethics. Aside from his sole-authored books on Captain America and Marvel Comics' Civil War, Professor White is also a frequent contributor and editor in the Blackwell Philosophy and Pop Culture Series, which introduces readers to basic philosophical concepts using the movies, TV shows, comic books, and music that they love. He has edited Superman and Philosophy, Batman and Philosophy (with Robert Arp), Watchmen and Philosophy, Iron Man and Philosophy, Green Lantern and Philosophy (with Jane Dryden), The Avengers and Philosophy, Downton Abbey and Philosophy, and Doctor Strange and Philosophy. He has also contributed chapters to volumes in the series on Wonder Woman, Black Sabbath, Metallica, South Park, Family Guy, The Office, the X-Men, Spider-Man, The Big Bang Theory, and Alice in Wonderland. He occasionally blogs on comics and philosophy at The Comics Professor. AUTHOR OF Maybe It's Just Me, But... In this blog, I discuss a wide variety of classic and contemporary issues, most often focusing on issues of ethics (especially in relationships), the strength of character, and the law.View Author posts