12 Old Fashioned Dating Habits We Should Bring Back In Trend 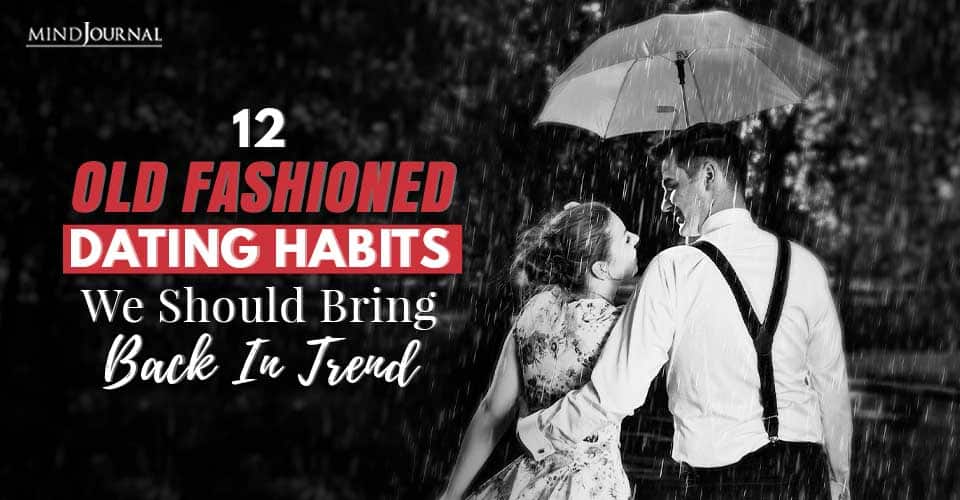 Dating and love in the old-fashioned age had a beautiful charm of its own, which is why some of those old fashioned dating habits should definitely be back in trend. Modern dating can sometimes be nothing short of sad, and traumatizing.

I don’t know about you, but I sure as hell feel a little bit out of date in the times we live in. Everything is so automated and so fast that we hardly get to sit and breathe.

And in this world of fast food and the likes, we now also have something called ‘speed dating’. And that’s it, I’m out. I don’t want to meet a bunch of strangers and spend a couple of minutes with each and suddenly decided who is good enough to make the cut. I want to experience a nice date, the old-fashioned way:  the time of the Gentleman and his Lady.

Dating in the golden ’70s would have been oh so romantic. At least it was real. In the world of Tinder and other matchmaking apps, authenticity doesn’t seem to be topping many lists of potential matches.

Also, dating meant more than just a quick meeting over coffee (definitely much more than Netflix and chill), it was a special occasion and the sincerity of the arrangements reflected it.

Instead of dropping hints, or simply hanging out together, it would be so much better if you straight ahead gather the courage of asking me out.

But nicely, make sure you don’t come off too strong and I get weary of you. But don’t worry too much, if you are sincere in your proposal, there will be no creeping out and it would be a welcome change for once to be asked out like that.

2. Putting efforts into dressing up.

Now, I am all up for comfort and feeling beautiful in our own skin. But is it so bad to expect a little bit of effort on the guy’s side in dressing up?

Don’t go all out and rent a suit, but do try to be presentable in one of your nicer outfits. I assure you that this effort on your part will not go unnoticed.

3. A token gift or flowers.

Now, this is something I have exclusively seen in old movies, but if your guy does this for you ladies, he definitely earned some respect today.

Carrying a flower or a small gift is such a sweet gesture, and as mentioned it is a gesture that is not weighed on the basis of money. It should just be heartfelt.

Related: 10 Unspoken Rules of Modern Day Dating that everyone should follow

The clubs these days are just a little bit too loud for me and I don’t enjoy them all that much. They are mostly about inebriated dancing and the music makes a decent conversation and impossibility.

Ever thought of taking your girl to dancing, in the old meaning of the term. Find somewhere you two can slow dance. With a swirl and a whirl.

This is perhaps the most sought after perk of old-time dating for me. I am so sick of two people going on a double date with their phones, where they never even look up long enough to see if the person is the same with whom they walked in.

A little bit of it sprinkled here and there wouldn’t be so bad either. Being chivalrous is one of those old-fashioned dating habits that seriously needs to make a comeback.

Like perhaps getting my coat for me, or taking out the chair for me, or holding the car door for me when we get in. I can go dutch on the money, but these gestures would be so appreciated.