Never Settle For A Man With These 15 Habits 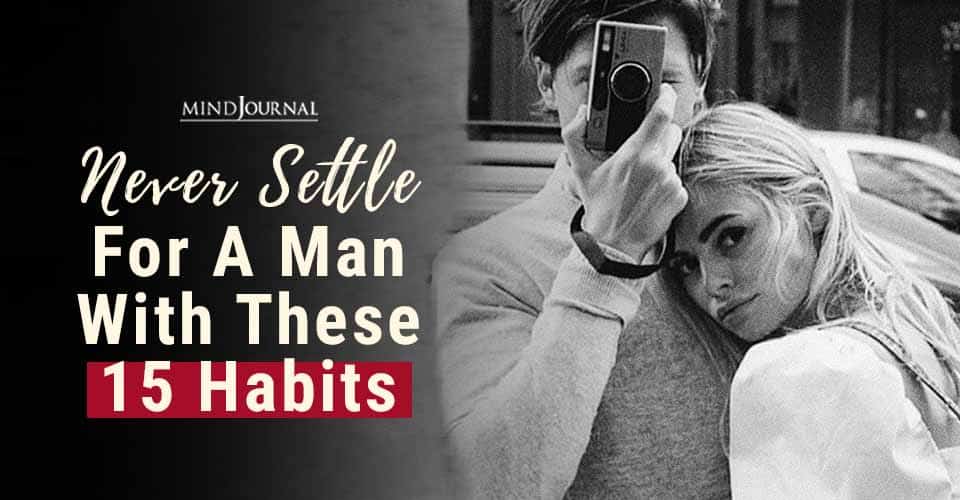 Everyone wants to have the right life partner to spend their lives with. While that’s okay, you should never settle for a man, who has certain bad habits.

Put yourself in a situation where you have to spend your life with someone who doesn’t admire you and your opinion? And just sees you as another lady and not their better half. Yes, it’s the highway to hell.

Though we all are a package of both plus and minuses, some bad habits and traits come off as major blockages in a ‘Happily Ever After’ and should definitely be avoided in a potential partner.

Everyone expects to live an independent life beyond a point. Yet if a guy thwarts your routine, throwing in restrictions and stoppages on your decisions, then losing him is the best option.

Restricting you to do limited things, under the fear of losing you, would be a boulder in your life and would pull you down.

Everyone adores animals and pets. Only animals hate other animals. And if your guy has this feature, choosing your pet is always the wiser choice.

Keeping allergies aside, it is inhumane to have hatred towards animals. This shows poor sympathy towards other creatures.

Everything has a protocol and every action has a rule. If your guy constantly tries to step off the line and protest against the ground rules that indicate that he disrespects your relation, and doesn’t deserve your love and time.

Breaking promises is the biggest way to lose trust in someone and if your guy does it often then he is just playing with you. Your opinions don’t count and your value is depleted. It can be excused once or twice but not often.

In a relationship, both individuals should be equally active. If there’s no contribution or efforts from his end and you are the one holding the relationship then you should immediately end it.

This means there’s lack of connect and would be a worry point after the marriage.

6) Thinks he is always right.

If you are getting married to a Mr. Right then get ready to have all your views opposed. Constantly thinking that he took the right decision or stressing in whatever he did was right just proves that this guy would never have a moment of realization. This can prove fatal for you and your children.

If you hear “I am sorry I was busy” more than “I love you” then you have your answer to the question that “will the excuses ever end”. Constructing excuses to break commitments just shows how disinterested he is in the relationship.

Generalizing the fact that fights keep a relationship healthy, constant fights just oppose it and hints that this is an unhealthy relationship.

If he keeps the fights alive, going against everything you say is a clear indication he is looking for troubles. Also, it portrays that he doesn’t comprehend you well.

You chose him because he is good at talking, but what if he intervenes in your topic and makes it his own topic? Yes, it’s totally annoying.

You should never settle for a man who always indulges in constant interruption and making everything about him reflect your position and helps you decide if you should lose him.

Sometimes lies are told to safeguard a purpose, yet one sabotaging your relation is a bad deed. Breaking the trust of the opposite person indicates how much he is into the relationship and if your guy breaks the barriers of lies, you break it off.

Personal space is demanded by every individual and should be respected by everyone. But if the guy holds on to you stopping you from carrying your chores and depends too much on you, it’s a sign of concern and weirdness.

Family is one of the most important things in everyone’s life. Surely they get on your nerves or cross lines but you can’t abandon them.

If a guy can abandon his family, their biggest backbone, then he can easily let you and your kids go.

13) Does not value your requests.

Assuming your guy has a bad drinking habit or smoking habit, and upon numerous requests, he fails to acknowledge it and continues.

This means you don’t hold any significant value in his life and your requests would never be fulfilled.

Constant nagging, cutting conversations, disrespecting peers or people around, sounds like what a teen would do. But if observed in a grown man, these features show his immaturity and he is the wrong guy as he can cut you off whenever he likes.

Related: Ladies Be Warned, 16 Men Share The Red Flags In A Man You Should Stay Away From

Violence of any sort should never be tolerated by anyone and if your guys even minutely posses it, go far away from him. Being violent, and abusive is never okay, and you should never settle for a man who is like this.

Being in a relationship where he loses anger can prove to be the most precious mistake of your life.

If you see most of these signs, or all these signs in the man you are in a relationship, then you should just pack your backs, and leave him. You deserve so much better than this.

If you want to know more about why you should never settle for a man with such habits, then check this video out below: