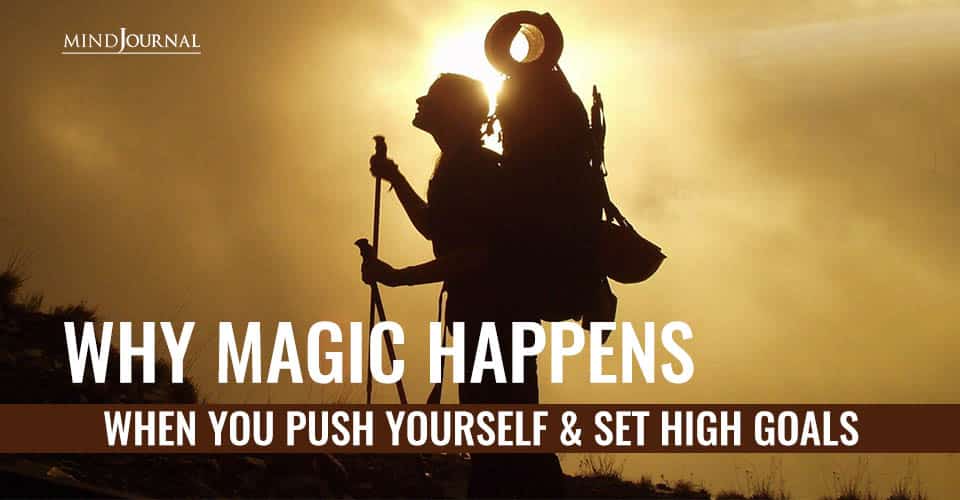 How often do you push yourself? Do you aim high in everything you do?

In order not to set yourself for failure, experts tell us, you need to pick goals that are smart, measurable, achievable, relevant, and time-oriented.

This makes sense, of course. But here is the wrinkle— S.M.A.R.T goals were created as a managerial tool in organizations. On a personal level, easily achievable aspirations are demotivating. “Easy” doesn’t equal “fulfilling.” Often, it doesn’t even give you a temporary burst of happiness.

There is just something about working hard to achieve what you aim for and getting it. Oh, the high you feel!

One of the most important (but perhaps somewhat neglected) ingredients for the successful completion of anything we set our minds on is what is known as the Pygmalion effect, or the power of positive expectations.

Related: Why Successful People Are Choosing to Wear the Same Thing Every Day

As the story from Greek mythology goes, a legendary sculptor from Cyprus—Pygmalion— carved a statue of the ideal woman. He stared at her day and night, worshiping his creation. And he ended up falling in love with her. Then, at a festival for Aphrodite—the Greek Goddess of Love, he prayed that she sends his way a wife exactly like the statue. The Goddess heard his prayers and instead—she brought the sculpture to life. And they lived happily ever after.

The moral of the story is that positive reinforcement can lead to favorable outcomes.

Fast forward a few hundred centuries—to 1963. Social psychologist Robert Rosenthal created a test where he told a group of student lab workers that certain rats in the lab were “maze bright” while others were “maze dull,” when in fact the rats were separated between the groups randomly.

The results confirmed the hypothesis of the test—the students subconsciously treated the smart rats differently. That is, they expected them to behave more intelligently, and guess what –they did! They learned the mazes much faster than the “dull” rats.

Similar results were later done with school children. Rather amazingly, teachers’ higher expectations of some students (after being told they had the exceptional potential for growth) made the students perform better on tests when in fact, the test groups were formed at random.

The take-home idea here is this: expectations can alter reality.

Let’s take this a bit further and on a personal level.

Setting big goals and expecting of yourself to achieve them, can give you a much better chance of actually getting there. It’s a bit of a self-fulfilling prophecy—by anticipating a certain positive or negative outcome, we may engage in behaviors to either improve or sabotage our chances to get there. [1]

This idea runs contrary to what we’ve been often advised by gurus and such—to not set big goals as we increase our odds of failing. Hairy goals are scary when we think about them in the absolute, yes. Even a bit stressful.

Related: Buddhism Reveals The Ultimate Mindset That Will Help You Achieve Your Goals

But at the same time, in order to do better, we need the scary and we need the discomfort. If all is great and rosy, then why change, right?

Therefore, you must aim high and set big Empire-state goals.

How you plan for achieving these is a different matter. This is where the common advice comes in—break The Goal into smaller ones—so small that you can’t say “No” to doing it. As in “take a 5-minute walk, eat one apple a day, write one sentence”—depending on what you set out for yourself.

Related: 5 Lessons I Learnt About Being Successful From My Life Threatening Experience

But here is another catch. Not every tall mountain you want to conquer should be out of reach. You need the tall ones and you need the medium ones too, just so that you can practice and move forward.

So, ideally, you want to have on your list few Everests or K2s (number one and two highest mountains in the world). That is, the “I-must-be-crazy-dreaming-it’s-possible” kind of goals. But you must also keep some Muztagh Atas or Ismoil Somoni Peaks (number forty-nine and fifty highest mountains)—still challenging but S.M.A.R.T too.

Related: 11 Things Common In Parents of Successful Kids According To Science

And if something is too effortless, know that it’s not a proper goal. Find a better one.

It goes down to this—when you go to the gym, for instance, do you want to have a great workout or just an OK one? And then, do you think you will lose weight by having it easy or by breaking a sweat?

Simply put – The magic happens when you push yourself.

In the end, remember that when you strive for high and you don’t get there, you are still in a good place. You have a better chance to get the closest alternative.

And how to be ready for the ups and downs that come with every success trajectory? Simple.

It’s like the saying goes: Hope for the best but prepare for the worst.

Are you ready to push yourself and aim high in everything you do?

[1] The opposite of the Pygmalion effect is called the Golem effect. It’s a psychological phenomenon in which lower expectations placed by others or the individual themselves lead to poorer performance by the individual. It is a form of self-fulfilling prophecy. It was also coined by Robert Rosenthal. It’s another mythical creature from the Greek mythology, who was created to fight evil but turned into a monster instead, as his creator always expected.

Evelyn Marinoff is a writer. She researches and writes about the psychology behind confidence, happiness and well-being. You can find her pieces in Thrive Global; The Huffington Post; TinyBuddha; Addicted2Success; Pick The Brain; The Quiet Revolution. Having struggled herself for years, Evelyn likes helping others to enhance their self-esteem and to learn self-acceptance. Evelyn is a Canadian, currently living in Dublin, Ireland, with her husband and son. You can find her on Twitter or on Facebook.View Author posts