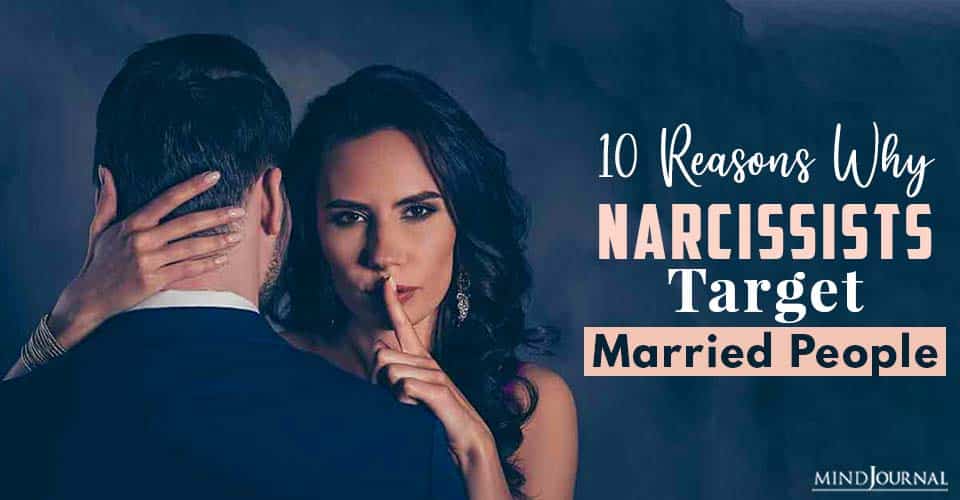 When it comes to narcissists, everything is possible for them, especially when it comes to playing manipulative and toxic games. In their quest of satisfying their massive egos, they don’t even hesitate in targeting married people; destroying someone’s marriage makes them feel immensely powerful.

“Nuns and married women are equally unhappy,” so said Queen Christina of Sweden.

I have not (yet) targeted a nun although I would readily claim to have done so since an entertaining tale would surely be attached to such an endeavor. It is a different story with regards to married women.

Our kind often targets married women and men for the purposes of seducing them, causing them to engage in an affair with us and cause us to put asunder that matrimonial union.

Why do we target those who are married? Given that our kind generally prefers to be pushing on an open door when it comes to the question of seduction and the fact that we like to conserve energy, why we would pick a target that is already with somebody else?

Not only are they with someone else but they are married, joined together by ceremony and therefore this coupling has become elevated to the ultimate statement of commitment and therefore ought to be regarded as unassailable.

The world is ours and that includes all those within it. We want therefore we should get.

2. Lack of boundary recognition; nothing is off-limits to us.

The institution of marriage is one we respect for the purpose of the facade but otherwise, it means nothing to us (The Narcissist and Marriage).

We might be labeled as a marriage spoiler and home wrecker but what do we care? It won’t be our fault because our narcissistic perspective automatically causes us to advance reasons as to why we have done nothing wrong – “He obviously wasn’t happy otherwise why he did he leave?”

A favored manipulation of ours that allows for contrast, the creation of drama, pitting parties against one another, and of course two fuel streams.

This includes the triangulation and lack of accountability as we regard ourselves as actually doing a good thing. We are the White Knight riding in to rescue the damsel in distress or the Angelic Soul tending to the downtrodden man. As is often the case we will portray ourselves as the rescuer – at least to begin with.

Seducing someone single, anybody we choose, and of course, succeeding shows how effective we are. Steal that person away from a partner, our power is even greater. Pluck them from marriage? How mighty are we to be able to do that?

The cuckolded individual might be someone who has mortally offended us and by stealing something so precious as their spouse, then that allows the delivery of sweet revenge on this transgressor.

A married person is clearly a love devotee. They will be honest and decent because they agreed to this statement of commitment. They subscribe to the institution of marriage which will indicate a good moral compass. They will be caring since they have agreed to be with another in this environment and that means they will share resources, tend for that person when upset or ill, and so forth.

It is highly likely that this individual, being part of a domestic set-up will engage in earning a wage, DIY, cooking, cleaning, tending for the other person, and similar tasks which tell those of our kind who prioritize those matters that these are residual benefits which are ready to be conveyed on us. There may even be property and financial advantages to sequestrate post-divorce.