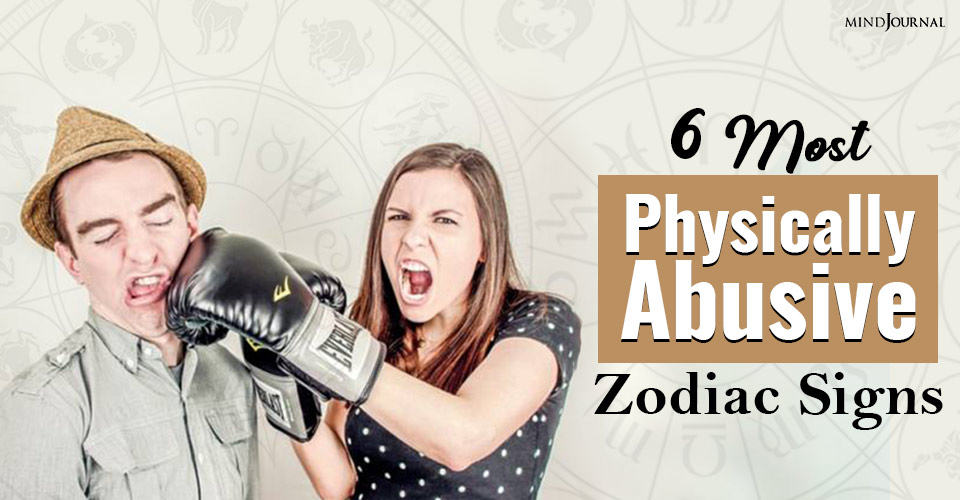 Here are the 6 Most Physically Abusive Zodiac Signs

When it comes to having abusive tendencies Scorpio truly enjoys it. They don’t necessarily want to cause you pain, but they’ll be happy to ruin your life if you let them.

Little acts of physical abuse don’t really interest them — they won’t smack you because they’re angry, for them, this is too flimsy and temporary. They’re full of destruction!

Aries is the sign of war, battle, killing and of course, all these aspects entail being violent. So, it only stands to show that Aries is more than likely the most physically abusive among the zodiac signs. They crave victory and if that doesn’t happen they will go crazy.

Read Aries Personality Traits: A Zodiac Guide to the Enterprising Yet Ruthless Sign

Taurus represents the Bull which means that they’re super stubborn. But when it comes to being among the most abusive signs they’re not overly violent. It’s just that being angry works for them. They cannot stay calm for too long, there’s always a quick punch in the nose or a push down the stairs — that’s how a Taurus is.

Read 10 Secrets About Taurus You Probably Know Nothing About

Leo is another zodiac sign who isn’t hesitant about being angry or violent. They get angry easily and become aggressive at every chance they get. They get impatient with everything in life. And it makes them crazy and frustrated. When they’re in a state of anger they usually begin to punch walls and rip up everything that comes their way. They don’t think before they commit violent acts, and they don’t regret them either.

Read Top 13 Reasons Why Leo Is The Best Zodiac Sign

The default emotion for Virgo is being abusive or violent. They get angry easily as though hate is what gets their blood pumping. They may not really assault or beat someone but they have non-stop violent tendencies about your painful death, and to pray with fervor for your demise.

Sagittarius isn’t the most abusive zodiac sign but they surely have a lot of aggressive thoughts going on in their mind. They will take revenge for those who have wronged them. If you’ve hurt them they will play graphic visions of you suffering in their head. Although it may be creative, there’s a good chance that at some point or another, you will suffer.

Read The Good and Bad of Loving A Sagittarius: 7 Brutal Truths

It’s been said that under most pressurizing circumstances, anyone can become violent. Most of us don’t like violence and find it rather disturbing. But a lot of people with specific zodiacs as mentioned above are repeatedly violent and often lose control over their actions; they tend to get physically abusive.

Did you find your zodiac sign here? Well, that means that you need to work on your anger issues and stop being abusive or violent.