Let’s look at a few blunt (and disturbing) facts about our society.

Not to mention, there are a whole host of false parenting beliefs and cultural beliefs that have been proven to cause brain and emotional health problems within children:

“Ill-advised practices and beliefs have become commonplace in our culture, such as the use of infant formula, the isolation of infants in their own rooms or the belief that responding too quickly to a fussing baby will ‘spoil’ it,”  says Darcia Narvaez, Notre Dame professor of psychology reporting on a recent study.

Related: Permissive Parenting Style: Why It’s Bad For You and Your Child?

How deep do the effects of poor and modern parenting go? 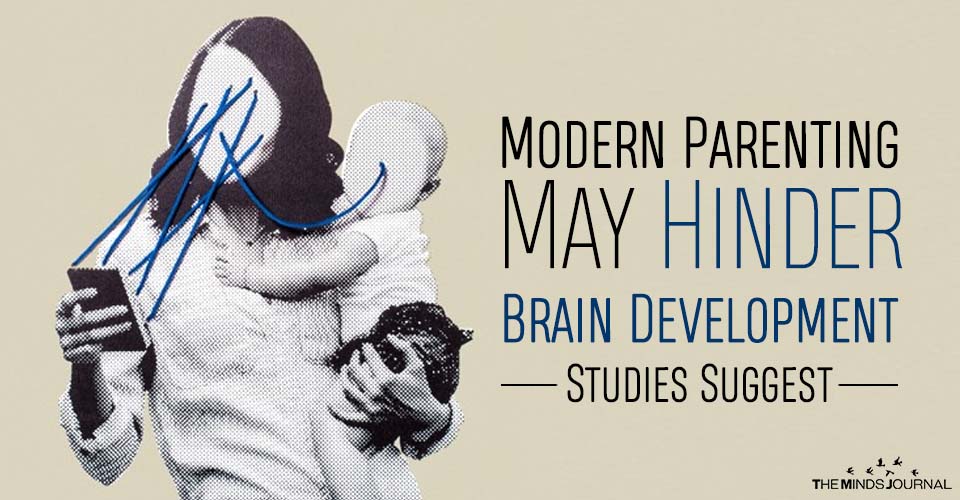 Aside from obvious forms of child abuse of all forms, there are some more deep-rooted and subtle forms of abuse that lie at the heart of depression and feelings of inadequacy.

When teenage boys are told to “grow up” and that men don’t cry, and girls are told they have to look and act a certain way and act like a “lady”.   The definition of a “man” and a “woman” are almost entirely socially engineered concepts that get reinforced at a very young age.

In other words, we are taught that the core of our natural expression and behavior is flawed, and that there is something defective about us because of how emotions present themselves within us.  Have you ever heard your mom or dad tell you to be a “man” or start acting like a “lady”? What does this do to your sense of adequacy, worthiness, and how does this play a role in the development of our conscience?

Is it possible that there are other deep-rooted belief systems within older generations that have negatively impacted the emotional and mental development of youth?

Kids are taught that crying to their parents a lot means they lack maturity or strength as an individual, and that needing to be around both mommy and daddy makes them less of a “big boy” or a “big girl”.  Being a “momma’s boy” is something that gets mocked and made fun of by other children as being a sign of weakness, and that needing to be constantly hugged or shown affection by either parent is a sign of weak will or neediness. In reality, society has it backwards:

“Breast-feeding infants, responsiveness to crying, almost constant touch and having multiple adult caregivers are some of the nurturing ancestral parenting practices that are shown to positively impact the developing brain, which not only shapes personality, but also helps physical health and moral development,” says Narvaez.

Studies have also shown that responding to babies emotional needs when they are crying contributes to their ability to empathize with other people and even has a correlation with a higher IQ.  But what happens in our society when a baby, or young child, starts crying?

Well to start, children spend more time in highchairs, car seats, carriages, and strollers than ever before.  And when kids start crying or throwing a fit, parents give them electronics and put cartoons in front of their faces to occupy them and provide them with a false sense of relief. According to a study done in 2013, 38% of children in the United States under the age of 2 have used an iPhone or an iPad.

Why do studies and say… Read more »

Reading can fill your mind with imagination and take you to places you’ve never seen. If you are wondering about making reading your hobby, then here are 8 reasons for reading more.
Read more
Coronavirus

Parenting during a pandemic is tough. Here's how to help your kids become emotionally intelligent and resilient
Read more
wpDiscuz
2
0
Would love your thoughts, please comment.x
()
x
| Reply