Who Are Low-Copers? The Upside and Downside of Being One 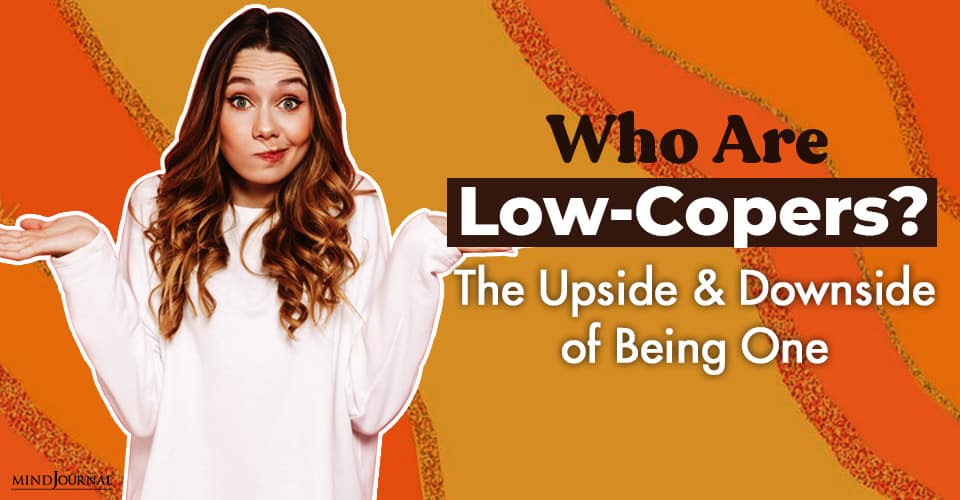 Written By Christine B. L. Adams

Have you ever heard of or come across people who are also known as ‘low-copers’? Those people who don’t really do that well with any kind of responsibilities and refuse to deal with life’s problems?

In 40 years of practicing psychiatry, I have come across a group of people I call “low-copers.” Simply, these are people who do not manage well day-to-day. They deal with common situations and difficulties at a low or ineffectual level.

Dictionary.com defines coping as the ability “to face and deal with responsibilities, problems, or difficulties, especially successfully or in a calm or adequate manner.”

Accordingly, low-copers do not deal well with assuming responsibilities. They do not solve or even manage their own problems or life difficulties in effective ways. They are often in an uproar and become highly anxious when encountering something they need to handle and solve. They have difficulty running their households, getting to work and doing it well, and dealing with routine social life.

I do not include as low-copers people who are ill, whether emotionally, mentally, or physically, nor people with low intellectual or cognitive abilities. Low-coper refers to a personality style.

Is There An Upside To Being A Low-Coper?

The upside for low-copers is they don’t have to exert themselves, solve problems, or face their responsibilities. Since they do not plan, strategize or solve, how do they negotiate life? They are extraordinarily skilled at getting other people to navigate life for them. They do this by whining, crying, yelling, and creating upset.

But is this coping style beneficial if they never do anything to tangle with problems?

Low-copers fail to get the self-esteem boost and pride that comes from managing reasonably well with the encounters of life. As a result, they remain inert and feel inept in taking care of their own or anyone else’s welfare. Since they cannot strategize or plan for dealing with problems, make present or future plans, or feel confident about tackling responsibilities, their emotional health suffers.

Low-copers become easily overwhelmed and anxious when encountering most tasks or decisions. Many times their anxiety causes them to lash out and they become angry, demanding someone else take care of their situation. They can be disagreeable to be around and upset others with their demands.

Dr. Christine Adams is responsible for bringing to the forefront the new concept of emotional conditioning and how it creates your personality and shapes your relationships throughout your life. She has been a child and adult psychiatrist for forty years and has helped thousands of people understand their relationship problems or failures. She is also co-author with Homer B. Martin, M.D., of the book, Living On Automatic: How Emotional Conditioning Shapes Our Lives and Relationships, which offers an exciting and groundbreaking new concept of how people relate to one another. Dr. Adams lives with her husband and currently teaches classes on personalities and relationships for The Veritas Society at Bellarmine University, Louisville, KY.View Author posts