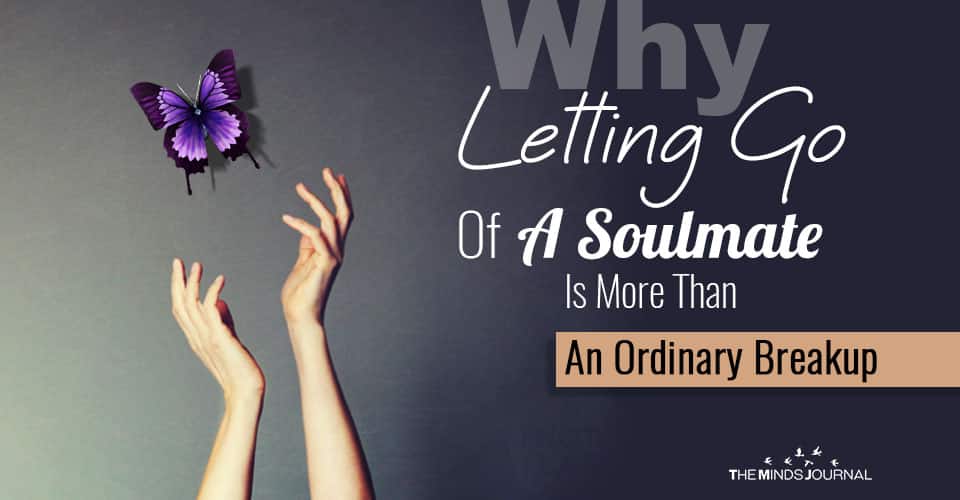 “When one door of happiness closes, another opens, but often we look so long at the closed door that we do not see the one that has been opened for us.” ~Helen Keller~

A broken heart holds onto everything that once made it whole – it seldom forgets. The emotional and intimate connection between soulmates is a precious bond of human love that makes letting go extremely challenging.

This love, depending on both sides, can be nurtured, respected, and prized, or it can be trampled on, abandoned, and even destroyed. Being human allows us to create a bond deeply with another human being and when that bond is between “true” soulmates, divine complements, it is meant to last for eternity.

This doesn’t happen every day. And because divine complements are connected at three crucial levels, the emotional, at the soul, and the spirit, letting go of a soulmate when the relationship is over can be extremely challenging. So much so that many remain in a ruined relationship far too long or emotionally attached years and years after the split.

After the breakup, the strong lingering emotional bonds can cause a person to brood for the love that was lost, clinging onto the good memories even when the bad memories were way more than the good. Prolonged emotional attachment is usually the result of over-dependence on the relationship as the primary and main source of love. The hollow feeling of loneliness and unbearable loss take control over one’s thoughts and revisiting the memories overwhelms them with grief. Some may never be able to let go entirely and can even sink into a dark and lonely depression, isolating themselves from others. They find it utterly unimaginable that they could ever be happy with someone else. Even at the point when all reason and logic lets them know it’s over and for the most part have moved on, their subconscious mind can hold on to the painful emotional residue for years on end. Embedded grief may resurface years after the initial breakup and especially if triggered by another loss.

Dreams of reconciliation happen very often amongst those separated from their soulmates. In their dream, the one with the broken heart may be joined by their estranged mate in green fields, places they’ve been to, or in a number of recreated scenes from their relationship for a reunion of sorts. These dreams seem to reconcile and numb the sense of loss, separation, and abandonment they constantly feel, filling them once again, if only temporarily, with a sense of closure and love. Although most dreams such as these merely represent an unconscious desire, having little basis in reality, they satisfy and fuel the flame of the need to keep the love alive.

Letting go of the emotional bonds requires a lot of self-love and patience.

For most people, letting go is much like accepting death. One must resolve to come to terms with their soulmate’s absence and loosen their grasp to set them free with love and forgiveness. Undoubtedly, the heart needs to grieve and will gradually mend with some time, support, and healing medicine. Wearing a rose quartz pendant can soothe the aching heart and complete and genuine forgiveness can set the heart free to love again.

The Psychic Bonds of the Soul

The soul’s psychic bonds can also bring many difficulties after the separation. Psychic bonds can persist and are experienced as anything from zoning out from time to time to share a psychic space that feels congested and overrun with unwanted emotions most of the time. It’s quite common for soulmates to sense when the other is in danger or has suffered a loss and even to start tearing up suddenly with unwanted emotions. Sometimes the information appears in a dream. For nights on end, a soulmate visits trying to communicate their desire for reconciliation or merely to express their continued love. One woman explained that her soulmate’s attempts to re-establish the relationship through the dreamscape were absolutely relentless. In her last dream, he had asked her to call him.

These sorts of experiences constitute a strong psychic bond that’s completely undeniable and that can be hard to break. For those remaining loyal and hold on to the promises, they made before the incarnation, their will to see their divine complements through tough times may add to their own pain. They may unconsciously be running to the rescue by taking on their partner’s karma. This kind of loyalty may become a burden too overwhelming to cope with. A psychic cord connecting one soul to the other often attaches when the human bond is really strong. Attached at solar plexus or the heart, it functions as a sort of lifeline for the soul that is dependent on the energy of the other. Cutting psychic cords is easy for an experienced psychic healer, but keeping the cords from reattaching is a much more difficult task, one requiring a deeper and more intense spiritual healing. The psychic phenomenon called cording can be repeated as many as 20 times a day. A soul using the life force of another soul seems to get its way more often than not.

The Eternal Connection of the Spirit

One bond between “true” soulmates, divine complements, can never be severed making the process of letting go a major challenge. The signature that connects them at the dimension of spirit is based on an eternal promise established at the beginning of the creation. It is an eternal bond settled at the heart of the spirit in a dimension beyond ordinary cognition, only seen by those who have awakened to its spiritual power.

The recognition of the eternal promise does not necessarily mean that soulmates are meant to hold on to a relationship that has ended.

Having to live with the sort of poverty of love that results in abuse, disconnection or perpetual discontent only produces more suffering and heartache. Letting go may be the most reasonable and loving thing a soulmate couple can do. With forgiveness comes greater acceptance and a much higher volume of love, a love that is less attached, full-hearted, at peace and wholesome.