30+ Kurt Cobain Quotes That Will Touch Your Soul 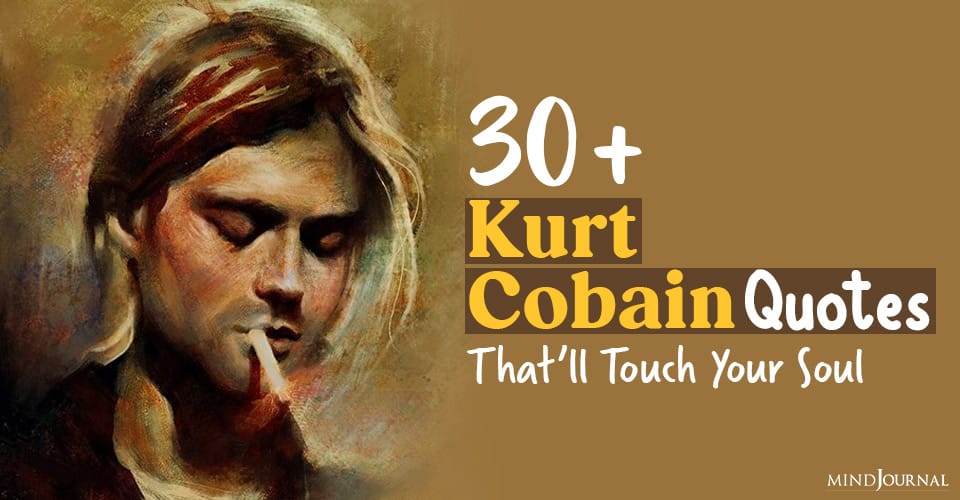 We all go through ups and downs in life, but there are very few who make sure that their problems don’t define them. Kurt Cobain is one of them! Despite having a troubled childhood, lack of emotional support, love, compassion, failed relationships, and good guidance in the teenage and adolescence, he became one of the most iconic rock musicians in the history of alternative music.

Forming the rockband Nirvana in 1987 and launching the popular album Nevermind in 1991 and second highly acclaimed album In Utero in 1993 made Kurt Cobain the voice of Generation X. Not only he was a talented singer, guitarist, and grunge performer, but he always composed angst-fueled songs that later became the hallmark blend of heavy metal and punk. “Smells Like Teen Spirit” is the biggest hit that actually gave a rapid rise in Cobain’s career.

Kurt Cobain always inspired people with his honesty and outspokenness. What surprised people was his contemporary thoughts that are still evident from his interviews.

In one of his interviews in 1991 he said –
“I don’t understand anything technical about music at all. I don’t understand any of it, why you can’t put these sounds together with those sounds. I only know what sounds good to us. “I, or we as a band, never really copied anybody or spent time learning other people’s songs. We were never good enough or had the patience to do it! So we put that energy into putting our own stuff together. We’re from the learn-­as­-you-­play school. We’re still in it.”

Unfortunately, his love for music, crazy fans, success, and fame, couldn’t help him get rid of heroin addiction, depression, personal and professional issues. And, finally, on April 5, 1994, he committed suicide by placing a shotgun onto his mouth. But, there are many conspiracy theories that circulated that it was a planned murder. No one knows the truth!

We will always miss his youthful face, shoulder-length blond hair, and his influential voice. His words and songs inspired the generations and will continue to do so. And, his quotes still inspire millions to chase their dreams and create the life they want.

3. “Wanting to be someone else is a waste of who you are”

5. “It’s really not hard to keep your dignity and sign to a major label… Most people don’t have any dignity in the first place.”

6. “We’re just musically and rhythmically retarded. We play so hard that we can’t tune our guitars fast enough. People can relate to that.”

13. “I use bits and pieces of others’ personalities to form my own.”

14. “Drugs are a waste of time. They destroy your memory and your self-respect and everything that goes along with your self-esteem.”

15. “There are a lot of things I wish I would have done, instead of just sitting around and complaining about having a boring life.”

Read 8 Principles To Help You Design Your Own Life Path

17. “Practice makes perfect, but nobody’s perfect, so why practice?”

19. “We have no right to express an opinion until we know all of the answers.”

20. “Life isn’t nearly as sacred as the appreciation of passion.”