11 Ways You Can Avoid Rushing In Love Too Soon 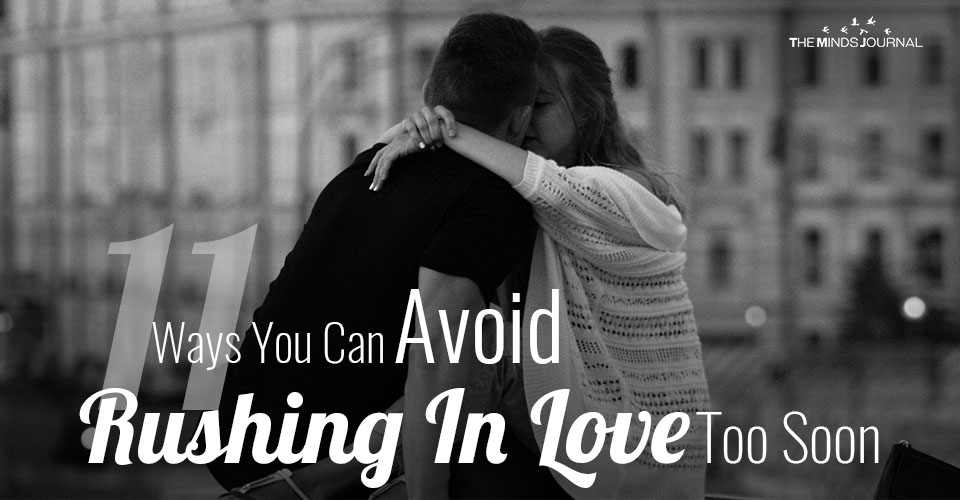 What’s this thin line that separates the way a Man and a Woman loves?

While we woman feels like a Princess when showered with it – On the other hand, it’s a Game spoiler when it comes to men. You send him mushy messages all the time, keep calling or keep being touchy – hat wouldn’t win his love my Dear – and it would never.

Men are Hunters, want what we call that Space, and this is where their Masculinity breeds. This extra space is what makes a woman appear attractive to them – like a trophy to win.

This “gap” is essential to pose a challenge to them. They need to feel the thrill of a chase and the victory that follows it. Woman, Change your moves. Be a kind of riddle he needs to solve. Otherwise, he might get bored soon.

This doesn’t mean you act mean or be too hard or change yourself. It’s just that you shouldn’t get into him too soon. Go slow. There is nothing wrong with being fascinated by someone, but don’t melt and be mushy.

So, till you are sure he is serious about you, just play your cards safe. Don’t Get Into Him Too Soon.

Here are ways to avoid rushing in love too soon

1. Don’t Get In Touch With Him

Let him do that. But when he does, make sure you respond.

Related: How To Get Him To Finally Commit To You

2. Don’t Start Cooking For Him

Leave those things for the future, until you are sure the relationship is moving in the right direction.

3. Just Because He Wants To Hang Out, Don’t Be Available All The Time

Remember, you have other things to do as well. Don’t get into him too soon by hanging out with him whenever he wants.

Related: 3 Things A Man Does Which Makes A Woman Feel Deeply Attached To Him

4. Don’t Act As Per His Likes And Dislikes

If you don’t like the place he wants to take you out for dinner, just express your disapproval.

5. Don’t Give Him A Back Massage

Not until you have been in the relationship for quite some time.

Let him tell you how much he likes you. Don’t Get Into Him Too Soon by professing your love again and again.

Related: Want A Healthy Relationship? Stop Making It “All About Him”

7. Don’t Make Him The Priority In Your Plans

You should be able to do absolutely well even without him.

Use smileys, but no hearts. Especially, no hearts struck with an arrow.

9. Don’t Have sex Or Spend Night In His Bed

A big NO, until you are sure he is in love with you.

Watch out this video to know about skills for healthy romantic relationships:

10. Don’t Buy Him Gifts Or Clothes

Not until you’re in a committed relationship.

11. Don’t Reveal To Him That He Occupies Your Thoughts And Conversation All The Time

Keep it to yourself, if you really fall for each other, there will be a point when he will know it even without your telling. Rushing in love too soon will turn him off.