How To Get Him To Finally Commit To You 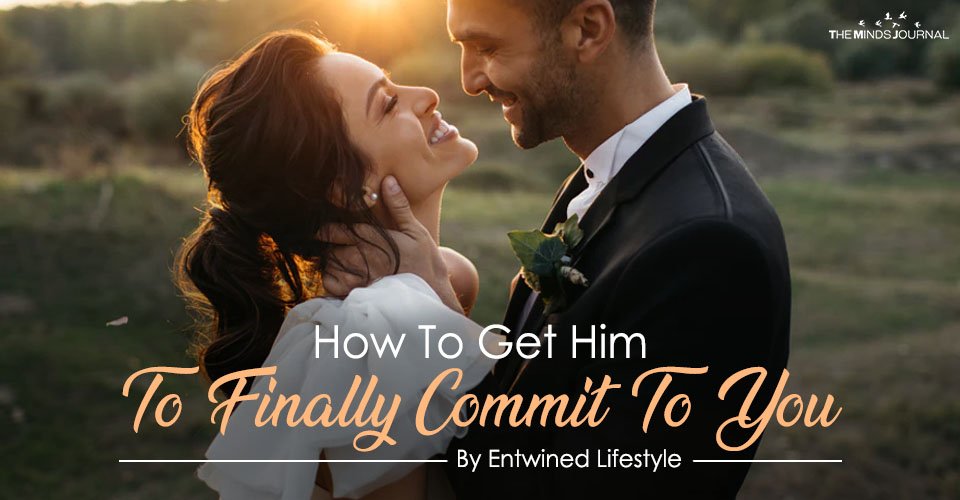 Getting a man to commit can seem like a foreign language, especially if you don’t speak his language. Every man thinks they have an infinity of options but are those options really of high-value?

Being high-value increases your chances of standing out in a bevy of women when it comes to winning his heart. It takes strategizing and patience, but completely doable for any woman who wants to tap into how a man thinks and get him to commit. So, how do you become the woman he values?

Here are 5 five ways to get him to commit so he can’t live without you:

1. Be Enjoyable To Hangout With

A debonair man will select a woman who he can have fun with. One who has an open mind and wants to have a good time pretty much anywhere, anytime. From baseball games with his friends to a weekend getaways snowboarding the slopes in the Swiss Alps.

A man is all about a woman who is adventurous and can enjoy the ride without knowing the outcome of the relationship status with each hangout.

Not only will he want a woman who can be flexible on the go, but one who can also engage in any conversation about noteworthy topics with his friends and family. He won’t want to feel like he has to constantly entertain or take care of you.

Embracing your inner stamina with his crew instantly boosts his morale without him having to worry about what you may say. This is the quickest way to put his mind at ease and commit to you.

He will want a woman who compliments his lifestyle in the least high-maintenance way.

Read Does He Have A Secret Crush On You? 45 Subtle Signs To Know

2. Show Him You Are High-Value

A woman of value knows her worth and will honor it by showing him what she deserves. This makes a man do a double take because he wants nothing more than a woman who adds value to his life and respects herself. If you aren’t adding value, then it is almost a guarantee he won’t commit to you.

You teach others how to treat you by how you treat yourself.

A man wants a woman he can be proud of and makes him look and feel good all the time, not only behind closed doors. Someone who he can introduce to friends, family, and colleagues while reflecting positively on his reputation.

If you aren’t bringing anything to the table, then more than likely it will be hard for him to see you as a valuable partner in his life. A man isn’t afraid to eat alone. He will take his time when it comes to choosing you.

3. Take Interest In Him

Taking interest in his passions and projects will tap into his thinking, offering you insight into what he values. If you are able to appreciate a man for who he is and what he enjoys, he will find you more attractive.

A confident man desires a woman who accepts him for who he is and doesn’t try to change him. If you find yourself losing your independence by investing your whole life into him, this will defeat the purpose of receiving a commitment. You have to be interesting yourself and have your own passions if you want him to take interest in you.

The majority of men find a deep appreciation with a woman who unconditionally supports him and is free of judgment. This inspires him to want to grow closer to you because he doesn’t have to be apprehensive to how you will respond to his next move.

Read 7 Unusual Signs A Man Is Into You

4. Be Authentic and Vulnerable

A man finds it attractive when a woman keeps herself put together on the outside; but, this won’t be the reason he falls in love with you. He will want to commit to a woman who is authentic and beautiful from the inside out. The real you. Not the woman in 5-inch stilettos and a designer dress. But, the woman who can be herself and isn’t afraid to show her imperfections.

Jan Yuhas and Jillian Yuhas, MA, MFT, CPC work with individuals and couples to design a love life they deserve. As Love and Lifestyle Coaches, they offer Love Coaching for Men and Women who are looking to attract the love of their life, Couples Coaching for couples looking to improve their intimacy and connection throughout their relationship, and Life Coaching to individuals who are seeking lifestyle balance between the three main tasks of life: love, work and social.Their areas of expertise include dating etiquette, charisma and confidence building, communication techniques, self-love and self-acceptance growth, personal image consulting, boundary setting, conflict resolution, and lifestyle balance between the three main tasks of life-love, work and social.View Author posts