The Power of Intention: How Your Thoughts Can Change Your Life, Scientifically Backed 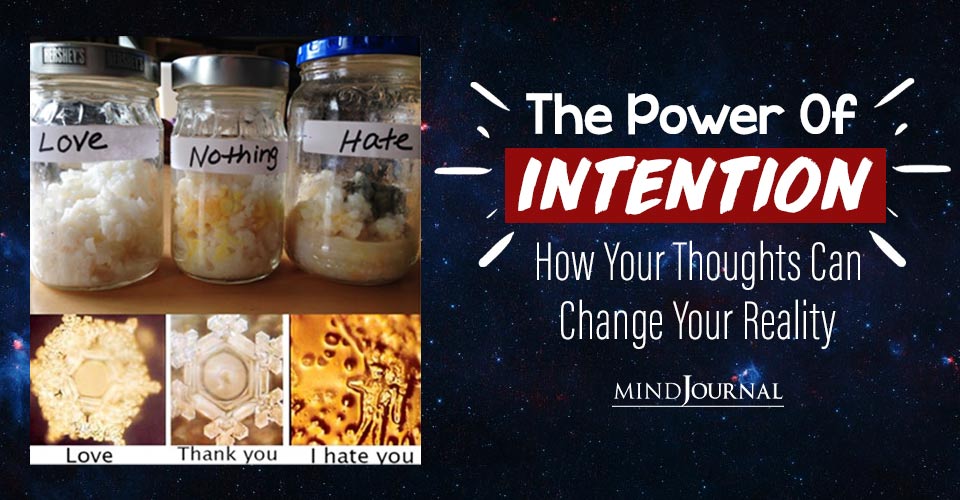 Did you know that what you think affects how you live? It can impact you and your environment. Good thoughts and the power of intention affects the physical reality of our lives. It’s strange but true and backed by science too. Take a look! Here’s how thoughts create reality.

Well, this has been tested by humans and the results are surprising but transformative.

Dr. Masaru Emoto, a researcher and alternative healer from Japan, has given the world wonderful evidence of the magic of positive thinking (Arnst, Chasse and Hoffman 2004). He became famous when his water molecule experiments featured in the 2004 film, What The Bleep Do We Know?

His experiments demonstrate the power of intentions that how human thoughts and intentions can alter physical reality, such as the molecular structure of water.

Given that humans are comprised of at least 60% water, his discovery has far-reaching implications… can anyone really afford to have negative thoughts or intentions?

Related: Why Staying Near Water Makes You Happy: Science Explains

The Power Of Intentions: Examples How Your Thoughts Can Change The World Around You

A group of approximately 2,000 people in Tokyo focused positive intentions towards water samples located inside an electromagnetically shielded room in California. Inside the room, there were similar water samples as controls kept in different spots, but that group was unaware of it.

It was hypothesized that water “treated” with intention can affect ice crystals formed from that water. Also, it was pilot tested under double-blind conditions

Ice crystals formed in both sets of water samples, yet only certain kinds of formations were present within the water they were concentrating on. Dr. Emoto found that samples of water that were treated to positive thoughts and intentions formed clear and beautiful ice crystals, whereas those exposed to negative thoughts and intentions showed negative and ugly patterns.

Ice crystals formed from both sets of water samples were blindly identified and photographed by an analyst. Later the resulting images were blindly assessed for aesthetic appeal by 100 independent judges.

In conclusion, the study results are consistent with a number of previous studies suggesting that thought and intentions may be able to influence the structure of water.

Related: 6 Negative Words That Cripple Your Self Esteem and Empowering Words To Replace Them With

Dr. Emoto demonstrated the power of negative thinking with his rice experiment. He places a small amount of cooked rice in two different glass jars. On one he wrote “thank you” and on the other “you fool”.

He then instructed school children to say out loud what is written on the labels every day when they passed them by.

So, think about what is worrying you most in the present time and transform it into positive thoughts. Tell yourself “I can do it”, “I will learn” or whatever suits your present situation. Repeat them each day and see how it changes your life.

Related: Motivation Such an Aggravation: Affirmations and How to Take Them

Make sure to completely avoid negative self-talk “I will lose…,” because your words and thoughts have vibrations that impact your health and your energy. Next time you are angry with someone just reminds yourself about the beautiful and ugly water crystalline structures.

I?m a former New Ager blogger of thespiritscience.net and spiritscienceandmetaphysics.com turned Christian after an encounter with the presence of Jesus. I created this website to help provide a rational foundation for faith in Jesus and to answer questions about alternative topics from a Biblical worldview.View Author posts

18 thoughts on “The Power of Intention: How Your Thoughts Can Change Your Life, Scientifically Backed”