“I Am Normal” And Other Lies We Tell Ourselves 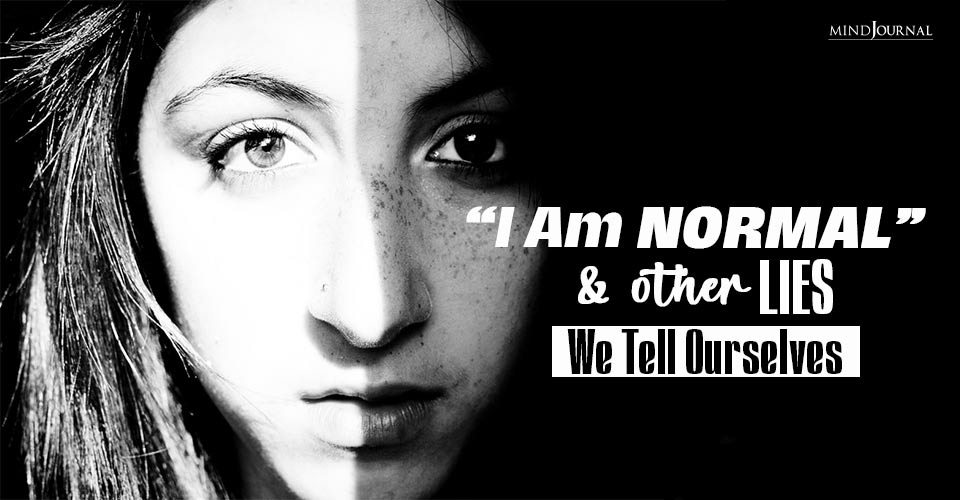 I am normal or am I pretending to be? What is the concept of normal anyway? Is it the same as average? Our minds think in terms of categories and concepts. It comes easy to us. It’s how we make sense of the world and our role within it. Unfortunately, however, this “common sense” approach blocks out alternative ways of thinking.

In the last century, we’ve been feeding our minds a steady diet of concepts based on a core mistake – a statistical error – that physicists have known about for 90 years, but behavioral science is oblivious about. My field, psychology, has been one of the worst.

All of them are massively supported by data – thousands upon thousands of scientific studies. Almost all are burdened by a shared analytic error: the “common sense” (but mostly false) idea that we can characterize humans based on what is usual, typical, average, or normal.

Read How You Screw Your Own Happiness, Based On Your Myers-Briggs Personality Type

The Concept Of Normal And Average

Data shows that the word “normal” was almost never used until after the Civil War, and was not used as it is now until well into the 1900s. The same is true for the word “average.”

And we’ve long known that something is wrong with these concepts. Since 1931 when the ergodic theorem was first proven, physicists have known that group averages (e.g., how a volume of gas molecules normally behave) apply to individuals (e.g., how individual gas molecules normally behave) only in a few very rare circumstances. None of those apply to people.

Todd Rose (in “The End of Average”) tells a story that will help you see one aspect of the problem.

When military planes were designed in the ’20s, a group of early pilots was measured to see how long their legs were, how large their torso was, where their eyes were when they sat down, etc., so that the planes would fit a normal pilot.

It worked alright, but as the planes became sophisticated in the ’50s, they began crashing due to pilot error. The military decided to re-norm the cockpit, theorizing that the body of the normal pilot may have changed over 3 decades. Nearly 4,000 military pilots were reassessed.

A single scientist, Lt. Daniels, thought outside of the box. He wanted to know how many pilots were normal overall. He took the 10 most important dimensions the team was measuring and asked, “how many of those nearly 4,000 pilots were in the middle 30% of the range for all 10 dimensions?”

Here was the startling answer: None. Yipes! No normal pilots?

How many were “normal” in at least 3 of the 10 critical dimensions needed to fly a plane safely?

What was designed to fit everybody fit nobody?

No surprise. The very idea of “normal” violates known laws of science if you apply these concepts to individuals.

How about mental disorders?

“Major depressive disorder” (MDD) is a collection of signs and symptoms that are suspected to come from a hidden (and as yet unfound) disease process that supposedly makes you depressed.

If so, you’d think the average person with MDD would be similar to others with MDD. Are they?

Steven C. Hayes is Nevada Foundation Professor in the Behavior Analysis program at the Department of Psychology at the University of Nevada. An author of 44 books and nearly 600 scientific articles, his career has focused on an analysis of the nature of human language and cognition and the application of this to the understanding and alleviation of human suffering. He is the developer of Relational Frame Theory, an account of human higher cognition, and has guided its extension to Acceptance and Commitment Therapy (ACT), a popular evidence-based form of psychotherapy that uses mindfulness, acceptance, and values-based methods.View Author posts