How To Respond To Passive Aggressive Behavior? 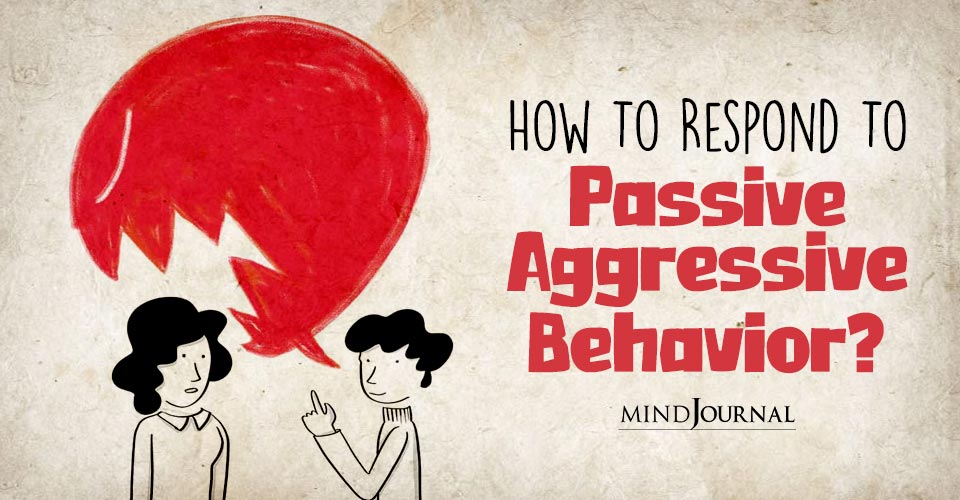 Ever come across someone with passive aggressive behavior? Well, then you’d know how tiring it can feel to deal with a bully. Here’s how to respond to them.

Passive-aggressive behavior is called “crazy-making” for a reason. If you complain about it, the perpetrator often acts as if you’re the one with the problem, and they’re just an innocent victim of your inexplicable frustration.

What Does It Mean To Have Passive Aggressive Behavior?

People who behave in passive-aggressive ways are not necessarily bad people. In fact, they’re often good people—so good that they don’t want to impose on anyone by asserting their needs or opinions openly.

Most of us at one time or another have used passive aggression with friends, family, or coworkers:

Related: Are You Passive-Aggressive In Your Relationship?

This list isn’t to shame you; it’s to help you understand that passive-aggressive behavior is not evil; it’s simply an attempt to avoid potential conflict.

Most of us don’t realize when we’re using a passive-aggressive communication style. That’s why it’s not a good idea to accuse perpetrators of manipulation. If they’re not aware of what they’re doing, they’ll deny it, and might even accuse you of making trouble.

The best way to respond to someone who’s using a passive-aggressive style is to hold up a mirror. Let them see the goals, objectives, wants, or needs in what they’re saying or doing. Be a smooth, reflective surface that helps them realize their own hidden agenda.

When someone makes a critical remark disguised as an innocent question, such as, “Are you going to eat that whole thing?” or “Do you like your son’s hair like that?” the best response is to ask calmly and politely, “What do you mean?”

That simple question holds up a mirror and shows them their own agenda. Usually, the person will either rephrase or say, “Never mind. Forget I asked.”

In response to nonverbal behavior that feels passive-aggressive, offer a non-judgmental observation of what happened, and let the other person explain himself or herself.

For example, if you invite me to lunch twice and I cancel twice, you might say, “Hey, Tina, I notice that you canceled both our lunch dates. I’d like to have lunch with you, but I’m not sure whether to ask you again.”

The first part is not an accusation; it’s an established fact: I canceled twice. But notice the I-statement that follows: I’d like to have lunch with you, but I’m not sure what to do here. Keep it about you, and ask the passive-aggressive perpetrator to help you clear up the confusion.

Good Boundaries Are Important To Deal With Passive Aggressive Behaviour

Try to remain calm and friendly when responding to passive aggression. Remember, it’s (usually) not on purpose. If they knew better, they’d do better. Be a role model for how to talk about things openly, without being scared or scary.

Responding to passive aggression is good practice for those of us working on boundaries. If you tend to take on the task of figuring out how to please, or at least read, other people, observing their behavior and asking them about it is a boundaried alternative.

Related: Emotional Blackmail And Its 7 Signs

Keep a metaphorical mirror in your pocket, and hold it up to passive-aggressive behavior. Don’t take it on.

Share your thoughts in the comments below if you have experienced or dealt with such individuals.

Tina Gilbertson is a psychotherapist specializing in supporting parents unwillingly estranged from their adult children. She is the author of Constructive Wallowing: How to Beat Bad Feelings By Letting Yourself Have Them and Reconnecting with Your Estranged Adult Child. She's the founder and host of The Reconnection Club, an online school for parents of estranged adult children. Her podcast for parents is called The The Reconnection Club Podcast. As an expert on relationships and communication, she's been featured in hundreds of media outlets including Forbes, The Washington Post, The Chicago Tribune, and Fast Company. Tina holds a master's degree in counseling psychology and is licensed as an LPC in Colorado and Oregon. She offers consulting and training all over the world.View Author posts