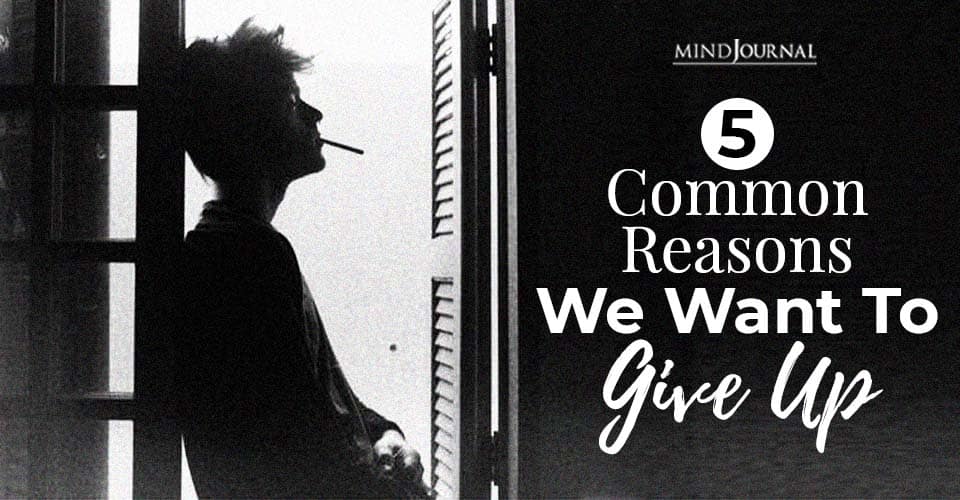 One of Aesop’s best-known fables is The Tortoise and the Hare. The hare challenges the tortoise to a race, confident he will win by a long shot. The race begins and the hare gets so far ahead of the tortoise that he takes a nap.

When the hare wakes up, he finds that the tortoise kept moving and won the race!

You and I can learn a lot from the tortoise. It may take a while to get where we’re going, but if we persist we’ll eventually get there.

There are times when you’ll feel like giving up on your creative goals. Maybe you’re writing a book, making a movie, or recording music. It’s important to be persistent and work through the problems that make it harder to reach the finish line.

Here are five common reasons we want to give up, and how to deal with each of them:

Your physical fatigue affects your mind and emotions. When you’re physically depleted you don’t have the willpower and the correct frame of mind to push through challenges.

Solution: Take care of your body and make sure you’re getting enough rest. (The average adult needs about eight hours of sleep per night.)

Many people also find that a nap helps refresh them. I take a short nap almost every day.

In addition, cut down your intake of junk food and fast food. If you need to lose a few pounds, get on an exercise program. You only have one body, so treat it well.

(I’m writing this for myself more than anyone. I may or may not have a wee bit of an obsession with Steak-n-Shake.)

Sometimes your problems seem to compound on each other and you just want to quit. It’s much easier to run away from your problems than deal with them head-on.

It’s more tempting to veg out in front of the television or bury your frustrations in a week of binge eating than to do the hard work required for success.

Solution: Deal with your negative emotions in a healthy way. Go for a walk, write in your journal, or find other positive solutions to your problems. Running away from your problems will only make them worse.

Running away from your problems only makes them worse.

Read 20 Little Choices That Lead To A Beautiful Life

Have you ever lost your focus and didn’t know which way to go? If so, you’re not alone. Everyone knows what it feels like to become paralyzed by the stress of life and lose their direction.

Solution: Reconnect with your purpose and vision. Where do you want to be in one, two, or five years? Think about your long-term goals and the steps it will take to get there.

What lies behind you and what lies in front of you, pales in comparison to what lies inside of you.

When you get clarity on what lies inside of you—your purpose and vision—the way forward becomes clear.

There are times when you’ve committed to too many responsibilities and you feel completely overwhelmed.

Solution: Prioritize your responsibilities. You can’t do everything. After I created my first podcast, called The Artist’s Suitcase, I kept it going for almost a year. It was a weekly show and it took several hours a week to produce.

However, I decided to end it after a few dozen episodes because it wasn’t helping me reach my creative goals at the time. There are times when you have to cut your losses so you can focus on the most important things.

Sometimes we are overcommitted because we’re afraid to disappoint others who request our time. You must become comfortable with saying “no” when you can’t fulfill a request. If you don’t control your time, someone else will.

If you are beating yourself up over mistakes you’ve made, you won’t be able to focus on the future. Regret can suck the life out of you and keep you from making forward progress.

Solution: Don’t dwell on the past because you can’t change it. Learn from your mistakes and apply those lessons to the present and the future. Focus on the one thing you can change, which is yourself.

Read 8 Simple Lessons That People Take A Lifetime To Learn

Matthew Weiner, a creator of the hit TV series Mad Men, knows a thing or two about persistence. He said,

It took seven years from the time I wrote Mad Men until it finally got on the screen. I lived every day with that script as if it were going to happen tomorrow. That’s the faith you have to have. Hollywood is tough, but I do believe that if you are truly talented, get your material out there, can put up with rejection, and don’t set a time limit for yourself, someone will notice you.

It’s easy to get sidelined by problems on the creative journey. But you must persist and keep on doing the work you’re called to do. There’s too much at stake for you to throw in the towel.

Remember the lesson from the tortoise and the hare: slow and steady wins the race.

Kent Sanders is a writer, professor, and creative coach. He is also the author of The Artist’s Suitcase: 26 Essentials for the Creative Journey, and host of the Born to Create Podcast. Kent’s mission is to help others unlock their creative potential. You can find lots of resources for creative entrepreneurs at his blog, KentSanders.net, where he writes about creativity, mindset, and productivity.

And now her watch has ended. Queen Elizabeth II bid adieu to the mortal world yesterday and left behind a daunting and iconic legacy. Ruling for 70 years, she was the longest-reigning monarch in the history of the United Kingdom, and a force to be reckoned with. This post is a tribute to the life lessons from Queen Elizabeth, the ones she lived her life by, and oh, what a life she lived!

One of the things that Queen Elizabeth was known for was her strong and sturdy health. Even when she was in her 80s and 90s, she could give younger people a run for their money when health was concerned. She lived through so many significant world events such as the Apollo 11 moon landing, the end of the Vietnam War, Chernobyl nuclear disaster, the Fall of the Berlin Wall, the 9/11 attacks, and the COVID pandemic.

She lived till 96 not just due to good luck, she lived her

From influencing women around the world to revolutionizing tennis, here are some powerful Serena Williams quotes and sayings that will inspire you on a path to success!

Being a record-breaking sports icon and No. 1 singles tennis player, Serena has dominated Women’s Tennis for over two decades. She has won numerous Grand Slam singles and countless other championships, including four Olympic Gold medals

But her success is not limited to the court. She has showcased her star power in various movies and music videos and even in the world of fashion.

But Serena’s journey to the top was not an easy one, and she had to fight for her title and overcome every obstacle that came her way. So here are motivational Serena Williams quotes and sayings for little girls and women, all over t

40+ Bob Ross Quotes That Will Instantly Make You Feel Happy

Bob Ross was not just a famous painter, he was a pop culture icon too, and honestly, he still is. He had an infectious personality and never failed to make you feel happy, whenever you turned the TV on to watch his famous painting show. He had an uncanny ability to make people feel at ease, relaxed and happy, and that is exactly what these Bob Ross quotes are true examples of.

Bob Ross had a hugely positive impact on his audiences, through his show, The Joy Of Painting, which also included many children. His relaxed way of teaching and his gentle voice made his audience feel like they were capable of anything. That was his magic, and that's why he is still so well-loved, even today, so many years after this death.

This compilation of famo

Kobe Bryant left us too soon. I still remember the day of the plane crash, and how social media and news channels were blowing up with the news of his death. It didn't feel real and felt like one of those hoaxes. Calling him a legend even feels like an understatement, but I hope this compilation of famous Kobe Bryant quotes can pay him the tribute he deserves.

Kobe Bryant's accomplishments were truly awe-inspiring and enviable at the same time. He was a five-time NBA champion, five-time New York Times bestselling author, 18-time All-Star, League MVP and two-time Finals MVP, and two-time Olympic gold medal winner. On top of that, he was the first professional athlete to win an Oscar for the Best Animated Short Film, "Dear Basketball", which he produced.

Not just basketball, he was magnificent and powerful with his words too. His quotes and sayings

Nipsey Hussle was a legendary American rapper, philanthropist, entrepreneur, and self-made millionaire who not only impacted millions of people with his music but also strived to do good for society by being a strong advocate for the Black community. These famous Nipsey Hussle quotes are simply a testament to his genius, strength and grit which were sadly snuffed out very, very early.

The rapper was gunned down in the parking lot of his own store by Eric Holder in 2019 when he was just 33 years old. He left behind his partner, Lauren London, and two kids. His unexpected and brutal death sent shockwaves not just through Los Angeles and the music fraternity, but throughout the world.

His music was well-loved by all, and he was truly respected as an artist and a human being. Even though it was hard for his fans to deal with his sudden death, he left behind a