How To Actually Do What You Say You Want To Do 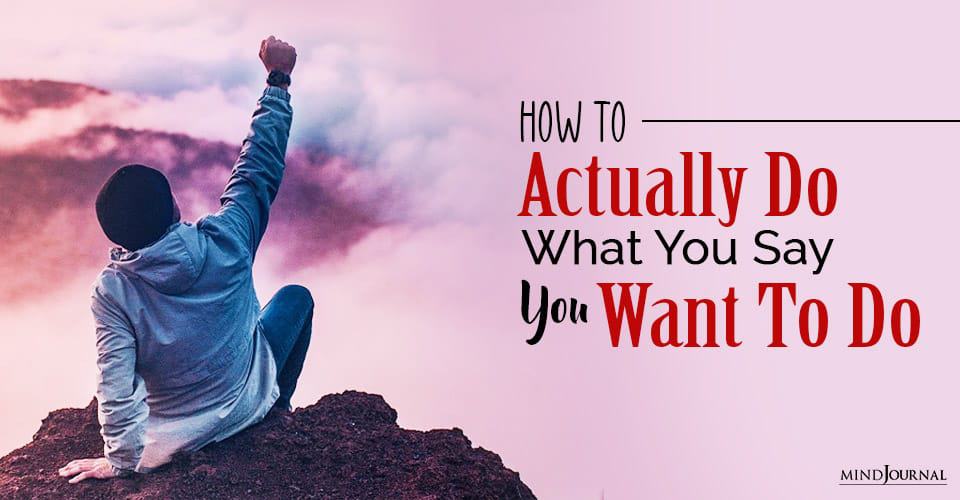 Have you ever said you want to do something but then you didn’t actually do it?

There’s hope. There’s a reason this is happening and that means there’s a solution. You CAN actually do what you say you want to do.

Three years ago I shared a story of how I wrestled with this wanting to but not actually doing thing. Recently I found myself wrestling again, but to do something different than last time. Still the reason is the same so the how to will work again for me and it’ll work for you too.

It’s a story both of failure and success. A story of how I moved from one to another and you can too.

I was one of those people that others love to hate – until I wasn’t. You know the kind.

I’m sure you understand now. Guy or girl, it doesn’t matter. It’s the feeling of inequity. Life does not dish out fairness. But

We have the ability to choose how to respond

And me. I was one of those people. I used to smoke cigarettes and could quit whenever I felt like it. It pissed people off. They were jealous. I’d smoke a half a pack a day. But then decide another day, I just didn’t want to anymore and would stop.

But therein lies the secret and I’ll bet you missed it. I did. Until it was missing. What was missing?

My want to do

I had quit smoking before I got married. Something my husband was very happy about. He knew I had smoked before but was very glad I was not a smoker when we got together. However, after I had my first child I started smoking again.

My husband watched the baby one night for me to go to a Bible study. When I got home, I told him I had to tell him something.

Read How To Break A Bad Habit Not Serving You Anymore

It sounded ominous. I saw the fear in his eyes. I told him I had stopped on the way to the study to buy a pack of cigarettes. Instead of being angry he was relieved it wasn’t something more earth shattering like me being unfaithful. No, I had just started smoking again.

No reason why. I just nonchalantly started again like I had before. I smoked for a while until I felt like I should quit. Everyone knows it’s not good for you. So I thought I’d quit just like I had all those other times.

But this time it was hard.

I kept trying to quit over and over. No success, only failure. I beat myself up inside. I understood the jealousy others had had of me. I struggled. Over and over. Until that night. I got an epiphany. An aha moment. We were at a friend’s house hanging out playing cards and I was in the cycle of not smoking in my attempt to quit.

The urge to smoke got so strong I couldn’t stand it. I asked my husband to go to the store and get me a pack of cigarettes and I started smoking again. Beating myself up, I cried out to God asking him what my problem was. Telling him what he already knew about how I had quit all those times before and it was easy and this is hard and what is going on?

He answered me. It was simple. It was hard to hear. He told me that I didn’t want to. Not really.

I had a wish for it but not a want.

I wished but didn’t will.
I didn’t want to do.
Facing that inner self-deception is painful.
But then he gave me a gift.
He gave me the way to get what I needed.
He told that he can give me the want to if I want it.
He referred to a verse in the Bible that says it is God who works in us both to will and to do…gives us the desire and the ability to act upon it…
It was what I needed.
I needed the want to.
I wanted the want to.

I asked him to give me the want to do.

Over time (I don’t remember how long, but not real long) I got that want to and I quit smoking without anguish. I have never forgotten that lesson. Now I ask for help to want to do things I wish I wanted to do because I want the outcome but find in me the lack of actual will to choose what is good for me.

Did you get that?

When I want something that is good for me but I don’t want to do what it takes to make whatever change is required, I ask for help. Without the want to I won’t make the change. I’ll procrastinate. I’ll wish. Even complain. But I won’t make any change.

That is when I need to ask God for the want to do.
The will.
The volition.

The will is the third part of our soul and without it, we are at the mercy of the mind and emotions. The will has the power to drive the other two but that is not how it is designed. The three need to be interdependent for harmony on our insides (but that is for another article).

The will is a powerful thing we must employ to overcome obstacles.

Like Misty Copeland. She was told she could not be a ballerina. She had the wrong body and she was too old at 13 years of age. Two obstacles. She could not get a new body nor get any younger. She became a ballerina anyways. She used her will to propel herself and here she is in this short commercial for UnderArmour™ She is amazing. Take ONE minute to watch this video.

I Will What I Want. – Misty Copeland

What obstacle do you have?

Do you need the will power of a yes or a no?

Read How to Manifest What You Want in 2021: Don’t Make These Mistakes!

Let me know in the comments. I will be your cheerleader.

Even if your will lacks want. There is still a way. You can ask for help two ways.

30 Life-Changing New Years’ Resolutions To Live By In 2023

Changes don't happen overnight - each year we make ourselves these promises to bring this change. Here are some New years resolutions for transforming life. Try them out!

These are some of the most inspirational thoughts to live by in the year 2023, that will alter your life for the better! These life changing thoughts will not only bring 'change' in your mind, thoughts, and life but it better your relationships and connection with the world.

How To Prepare For 2023 and Make It Your Best Year: 10 Ways To Build A Better Life

Still reeling over 2022? Well, as another challenging year comes to an end, it’s time you start focusing on what lies ahead and prepare for 2023. So, look beyond new year's resolution and start taking charge of your life once again, one step at a time, to live a simpler and better life.

2022: Another year, Another milestone

If you’ve survived this year without any significant battle scars, then congratulations are in order. If you’ve survived 2022 even after being broken mentally, emotionally, physically and financially, then I tip my hat to you. 2022 was both challenging and full of opportunities. While it felt like another new challenge was thrown at your face just as you overcame the previous one, it also marked several new milestones.

And now her watch has ended. Queen Elizabeth II bid adieu to the mortal world yesterday and left behind a daunting and iconic legacy. Ruling for 70 years, she was the longest-reigning monarch in the history of the United Kingdom, and a force to be reckoned with. This post is a tribute to the life lessons from Queen Elizabeth, the ones she lived her life by, and oh, what a life she lived!

One of the things that Queen Elizabeth was known for was her strong and sturdy health. Even when she was in her 80s and 90s, she could give younger people a run for their money when health was concerned. She lived through so many significant world events such as the Apollo 11 moon landing, the end of the Vietnam War, Chernobyl nuclear disaster, the Fall of the Berlin Wall, the 9/11 attacks, and the COVID pandemic.

She lived till 96 not just due to good luck, she lived her

From influencing women around the world to revolutionizing tennis, here are some powerful Serena Williams quotes and sayings that will inspire you on a path to success!

Being a record-breaking sports icon and No. 1 singles tennis player, Serena has dominated Women’s Tennis for over two decades. She has won numerous Grand Slam singles and countless other championships, including four Olympic Gold medals

But her success is not limited to the court. She has showcased her star power in various movies and music videos and even in the world of fashion.

But Serena’s journey to the top was not an easy one, and she had to fight for her title and overcome every obstacle that came her way. So here are motivational Serena Williams quotes and sayings for little girls and women, all over t

40+ Bob Ross Quotes That Will Instantly Make You Feel Happy

Bob Ross was not just a famous painter, he was a pop culture icon too, and honestly, he still is. He had an infectious personality and never failed to make you feel happy, whenever you turned the TV on to watch his famous painting show. He had an uncanny ability to make people feel at ease, relaxed and happy, and that is exactly what these Bob Ross quotes are true examples of.

Bob Ross had a hugely positive impact on his audiences, through his show, The Joy Of Painting, which also included many children. His relaxed way of teaching and his gentle voice made his audience feel like they were capable of anything. That was his magic, and that's why he is still so well-loved, even today, so many years after this death.

This compilation of famo