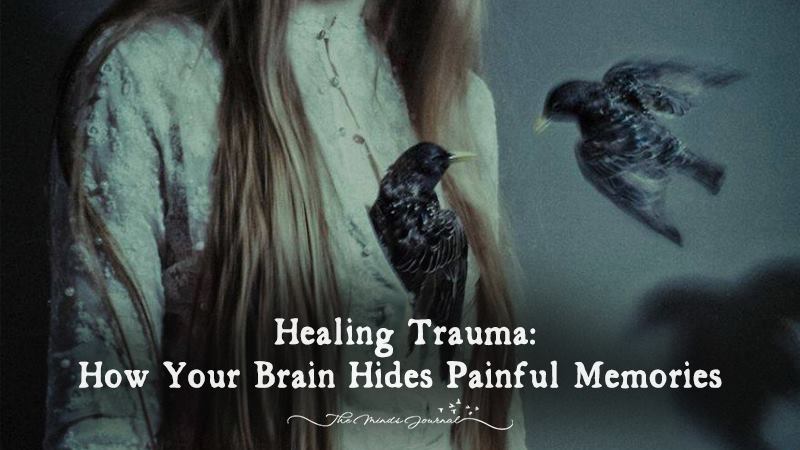 Childhood trauma always leaves its scars. Children can experience or be exposed to violence, mental abuse, neglect, vehicle accidents, natural disasters, rape, or other circumstances of extreme fear and shock.

As a result, they change for the worse. Their play becomes repetitive and often involves their trauma. They can’t sleep by themselves or be alone at any time. They distance themselves from people, have a low self-esteem, and have difficulty with trust. Aggression is a common symptom, as well as self-harm and abuse of drugs or alcohol. (1)

However, this is not always the case. Sometimes the trauma is blocked by the child’s brain and cannot be remembered. An adult may become disgusted or terrified when smelling a particular type of liquor, or inexplicably angry or afraid when touched by an older person. The brain could have blurred a memory about being raped by an older individual who was drunk.

Traumas Hidden by the Brain

Many people suffer from depression, post-traumatic stress disorder (PTSD), and anxiety as a result of their childhood experiences. However, it’s difficult for them to receive the psychological counseling they need if they cannot recall the incident that is causing all this hardship. This seems like a lose-lose situation for trauma victims.

The Study of Memories and Mice

Northwestern University conducted research that may break this vicious cycle by discovering exactly how the mind hides painful memories. The scientists administered a drug to their lab mice that stimulated the extra-synaptic GABA receptors in their brains. These receptors alter the state of the brain, which causes a person to feel alert or calm, tired or awake.

Next, the mice were put into a box where they were briefly given a mild electric zap. This action represents a trauma in a PTSD victim. The next day, when they were returned to the box, the mice were composed and scurried around freely. This is the stage where the victim cannot remember the incident and continues as normal.

However, when the mice were supplied with the same drug that tweaked their extra-synaptic GABA receptors and placed back into the box, the rodents froze with fear.

The researchers deduced that the mice were able to access the memory of the shock when they were in an identical psychological state as the trauma.

“The brain functions in different states, much like a radio operates at AM and FM frequency bands,” said principal researcher Dr. Jelena Radulovic, a professor at Northwestern University Feinberg School of Medicine. “It’s as if the brain is normally tuned to FM stations to access memories, but needs to be tuned to AM stations to access subconscious memories.”

These findings show that brains of certain individuals under traumatic stress don’t form memories the regular route, but instead turns on the extra-synaptic GABA system to create inaccessible memories. This is the mind’s way to protect the person from the horror and stress he had just experienced.

Dr. Radulovic said that this study “could eventually lead to new treatments for patients with psychiatric disorders for whom conscious access to their traumatic memories is needed if they are to recover.” (3)

Naturally, it will be challenging and painful for victims to discover the unspeakable horrors in their past, especially ones that they never thought existed. Yet this is the process of healing. One cannot look to the future while they are haunted by the past.

This research could be a beacon of hope to those who cannot remember what is holding them back in life.

Kirsten Cowart
Kirsten is a writer and researcher who loves to practice meditation, yoga, travel, and learning about reality, consciousness, and how to make the world a better place. Her current interests involve studying and practicing flow, staying In Flow, and recognizing the natural flow of the universe. Kirsten loves to learn about the holistic healing arts. She is also interested in ancient cultures and practices such as Shamanism and Druidism. Kirsten is honored to be apart of such an incredible movement of love and heart centered living in this world.

Are you dealing with a past trauma that's negatively affecting your current relationship?
Read more
Coronavirus

10 Best Ways To Better Your Life While Self Isolating

Stuck at home! and don't even know for how long? Here's what you can do to better your life while self isolating.
Read more
Coronavirus

If you notice that you avoid difficult things, get easily flustered under pressure, or tailspin and lose control when bad news comes your way, this will help you immensely.
Read more

If he loved you, you wouldn’t be up right now

What is depression? – Mind Video