If You’re Having Suicidal Thoughts, Please Read This 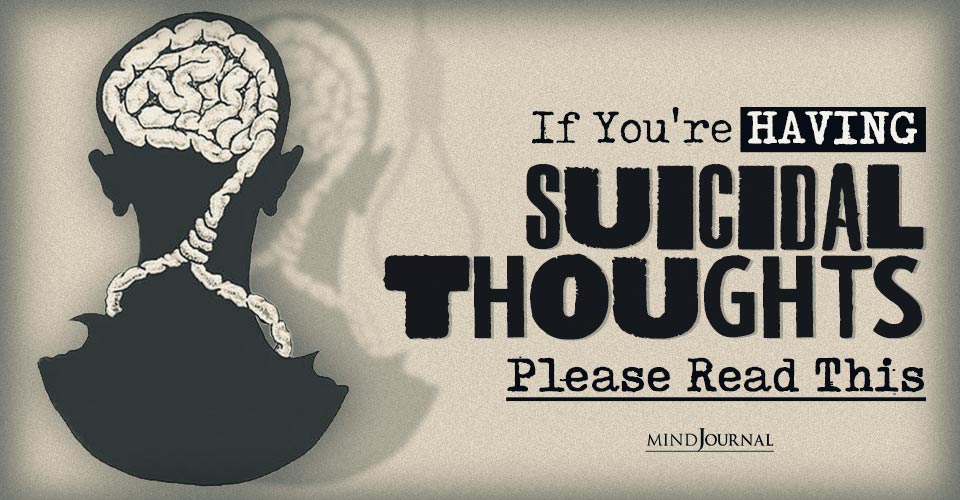 I’ve now known, and I mean genuinely knew in person, spoke with, or was friends with, four people who have committed suicide. Attending those funerals, seeing all of the people who truly loved and cared for that person… How could they leave all of these people behind? I thought to myself. Even though, deep down, I knew how.

Because I’ve been on both ends of this. I know how you can contemplate it, I know how the thought can cross your mind when you feel like you’ve been pushed so far, you’ve been hurt so much, suffered for so long. I have mourned for those individuals who have committed suicide, but I have also had dark moments when those thoughts have seeped into my mind too.

But why? Many people may wonder. Why would the thought of taking your own life ever cross your mind? Well, there are a million reasons why.

And it could include anything from life trauma to chemical imbalances in the brain, to overpowering stress, anxiety, or depression, or just trying to live in a world where you constantly feel like you don’t belong or like you’re always being knocked down. Or sometimes. We just don’t know why we feel the way we do, and we may never know.

In this life, people can be viciously cruel and extremely selfish. Even sometimes the people we love most can hurt us more than anything or can let us down over and over again. People will hurt others without thinking about the repercussions of their actions, or even stopping to reflect on how they may have impacted another person in a negative, toxic way.

Or sometimes, the pain is not caused by anyone else at all. Sometimes, we just feel alone. Like no one could ever possibly imagine or understand what’s going on inside our heads because we don’t even understand it. We feel crazy, dissociated from the world like a lost soul wandering deserted streets.

Suicide does not discriminate. Look at some of the most famous role models, the individuals who were idolized by millions of people, but it still wasn’t enough to keep them here. It wasn’t enough to fight off the demons or suppress the harmful thoughts.

Kurt Cobain, Chris Cornell, Chester Bennington…the list goes on. I recently went to a Disturbed concert where lead singer David Draiman took the time to talk to us about suicide awareness and the “demons all of us are fighting,” each and every day. He told us that we must all be advocates not only for ourselves but for those who are struggling mentally.

“Intervene. Be an advocate. Don’t wait until you’re at their funerals standing in front of their casket…” David urged. Friends, family, whoever that person is who is coming to you, reaching out to you at their darkest hour, be an advocate for them. Help them. In any way, you possibly can. Suicide is never ever the answer, it is not a solution, eliminate it as an option.

It is something that is permanent. There is no going back, no rewinding time. It is something that inflicts pain upon those who love you…even if you don’t always feel their love, it’s there. I promise. And you leaving this world will only hurt them, more than a thousand knives through the heart, more than you could ever imagine.

You would leave a void in their lives that could never be filled. You will be gone, and you will be leaving them behind to hurt, to mourn, and to try and live an impossibly normal life afterward.

Related: Suicide Is Never The Answer: 6 Things To Know When Ending Life Seems Like The Best Option