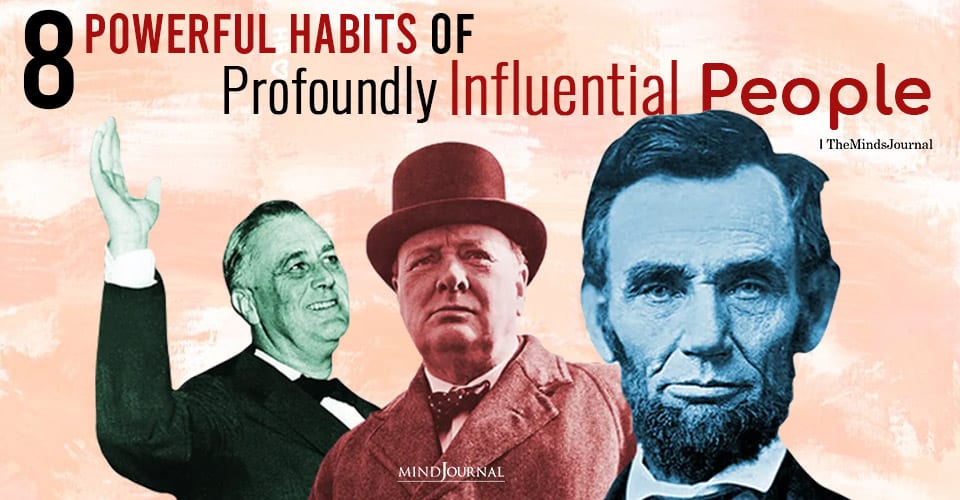 What makes someone influential? What is it that makes them stand apart from the rest? Becoming a successful person, a respected leader, and an inspiring influencer takes a lot more than simply working hard. It requires a combination of passion, determination, willpower, drive, and some highly powerful habits that enables them to lead with their mind and heart.

Influential people have a profound impact on everyone they encounter. Yet, they achieve this only because they exert so much influence inside, on themselves.

We see only their outside.

We see them innovate, speak their minds, and propel themselves forward toward bigger and better things.

And, yet, we’re missing the best part.

The confidence and wherewithal that make their influence possible are earned. It’s a labor of love that influential people pursue behind the scenes, every single day.

And while what people are influenced by changes with the season, the unique habits of influential people remain constant. Their focused pursuit of excellence is driven by eight habits that you can emulate and absorb until your influence expands.

“Depending on what they are, our habits will either make us or break us. We become what we repeatedly do.” – Sean Covey

1. They Think For Themselves.

Influential people aren’t buffeted by the latest trend or by public opinion. They form their opinions carefully, based on the facts. They’re more than willing to change their minds when the facts support it, but they aren’t influenced by what other people think, only by what they know.

2. They Are Graciously Disruptive.

Influential people are never satisfied with the status quo. They’re the ones who constantly ask, “What if?” and “Why not?” They’re not afraid to challenge conventional wisdom, and they don’t disrupt things for the sake of being disruptive; they do it to make things better.

When influential people speak, conversations spread like ripples in a pond. And those ripples are multidirectional; influencers inspire everyone around them to explore new ideas and think differently about their work.

4. They Leverage Their Networks.

Influential people know how to make lasting connections. Not only do they know a lot of people, but they also get to know their connections’ connections. More importantly, they add value to everyone in their network. They share advice and know-how, and they make connections between people who should get to know each other.

Influential people do not react emotionally and defensively to dissenting opinions—they welcome them. They’re humble enough to know that they don’t know everything and that someone else might see something they missed. And if that person is right, they embrace the idea wholeheartedly because they care more about the end result than being right.

7. They Respond Rather Than React.

If someone criticizes an influential person for making a mistake, or if someone else makes a critical mistake, influential people don’t react immediately and emotionally. They wait. They think. And then they deliver an appropriate response.

Influential people know how important relationships are, and they won’t let emotional overreaction harm theirs. They also know that emotions are contagious, and overreacting has a negative influence on everyone around them.

Influential people always expect the best. They believe in their own power to achieve their dreams, and they believe others share that same power. They believe that nothing is out of reach, and that belief inspires those around them to stretch for their own goals. They firmly believe that one person can change the world.

Related: 10 Psychology Tricks You Can Use To Influence People

To increase your influence, you need to freely share your skills and insights, and you must be passionate in your pursuit of a greater future.

Here’s an interesting video on the habits of highly effective and influential people: