5 Things That Differentiate A Genius From Ordinary People 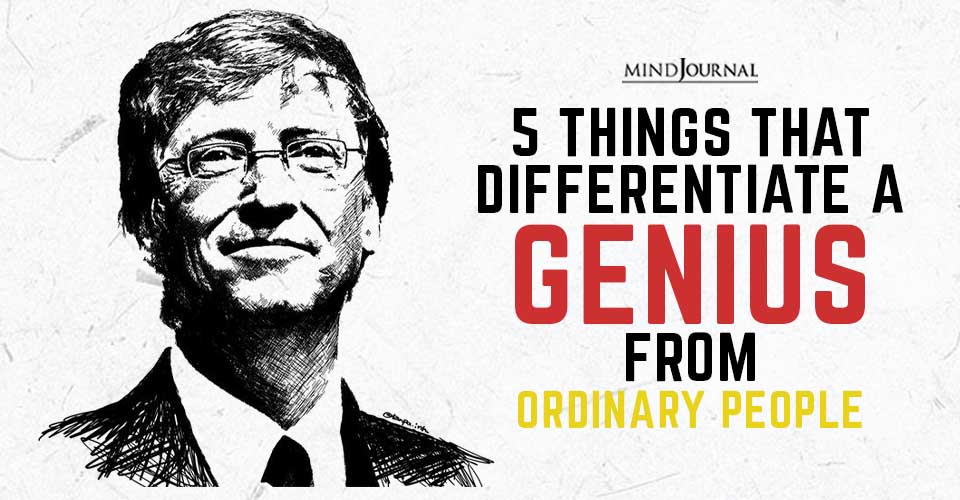 Genius people have always been different from people who are not like them. Sometimes they are hated for that, and sometimes they are misunderstood for that. But one thing is for sure, they are always admired. Some may not admit that, but everyone dreams of being a genius.

It’s not what geniuses’ think that makes them genius but they way they think.

If an average person and a genius look at the same thing at the same time, they will perceive two different things. When we see things we perceive them and it’s the perception of a genius that makes them a genius. Something might seem like a simple, harmless thing to you, genius people will look at it from a thousand different perspectives, and come with a thousand more interpretations. That is the beauty of being a genius.

Here are 5 things that genius people do, that differentiates them from average people.

When you come across genius people, the first thing that will strike you about them is how productive they are. They might not hit the bullseye every time they attempt something, but they never let their failures deter them from trying over and over again until they get the desired results. And after they are successful, they work more to improve themselves and their work.

Thomas Edison is the perfect example for this, he failed numerous times before finally coming up with the revolutionary bulb.

People often fear failure and let themselves settle for less than what they are capable of. They limit their creativity. The more you try, the closer you get to achieving something big.

Go on trying, it’s okay to make bad things, write a bad poem, plan a bad business, paint a bad picture just go ahead and do it, the more you make the closer you get to something great. Just don’t give up, because failure is a part of every venture. Genius people know that, and that is why they are always so productive.

Related: 5 Simple Habits That Will Make You A Creative Genius

2) They look at problems from various standpoints.

Most people tend to look at problems with a uni-dimensional approach, and then go with the easiest and most convenient solution. But genius people never do that.

Mostly their approach towards problem-solving is through deductive reasoning which is often considered a better technique to reach conclusions as compared to inductive reasoning.

You might abandon any idea that you feel is difficult and also stop your thought process once you have a convenient solution but that’s not the case with geniuses, they keep looking for solutions even if they already have an easy one. They leave no stone unturned, and in the process explore every possibility and potential of the problem.

One cannot solve a problem with the same mindset which was there while encountering the problem. Genius people realize this and change their perspectives and attitudes towards any problem they might encounter.

3) They visualize their thoughts.

Genius people know this and realize this very well, and they always try to be more spatial and visual with their ideas. Putting your thoughts in a diagram not only helps you conceptualize it better but can also help other people understand it, and come up with solutions themselves.

So, in a way, genius people don’t just help themselves when it comes to solving a problem, they end up helping other people too with their effective techniques.