How I Gave Up Toxicity: My Story 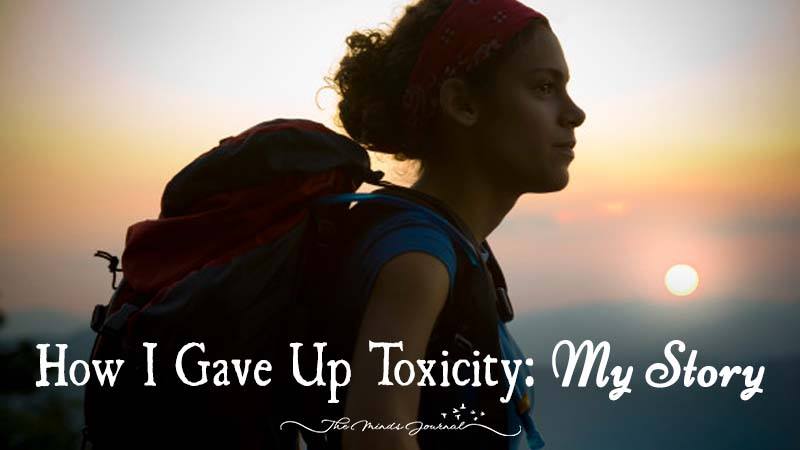 My childhood wasn’t exactly a happy and joyous one. It was different – full of wrong experiences. This resulted in a more disturbed behavior in my early adulthood. This is something I realized when my peers and my family were not much accepting of my presence. I perceived that I was selfish and was a bad presence in the lives of people around me. I was becoming toxic, day by day.

I decided to explore the cause. I realized I have been suffering for long. I had no clue that I was inflicting pain because I was the one in pain, suffering deep down.

Read 13 Signs Of A Toxic Parent

How I looked As A “Toxic Person”

I lied to get things done on my own way. I could easily avoid responsibility.

2) I Used To Let Down Everyone

I was insecure and never liked expressing too much of emotions, I harbored anger inside me and always let people down.

3) I Held Others Responsible For My Own Problem

And, as a result, I ended up whining about my problems and made others realize that they were the root cause of it.

4) I Always Resorted To Sarcasm

I took my sarcasm a little too far. I used it in a negative sense to make others feel bad.

5) I Was Stubborn And Never Listened To Anyone

I never paid a heed to any important conversation. I even yelled “shut up” or “stop talking”, way too much.

6) How Badly I Use To Back-Bitch About Others

Yes, I even went to the extent of spoiling someone’s reputation.

That too, for no reason at all.

Even though I had this feeling that I have to change, but it wasn’t easy. I had to strategize my efforts to get rid of every shred of toxicity within me.

1) I Became My Own Therapist

One day, I sat by the window, all alone in my apartment and thought to myself, why am I like this? What is it about me that annoy people so much? I don’t know why, suddenly these arrays of thoughts were clouding my mind. But, then I told myself because ‘I was lonely’, ‘I had no friends’ and all due to my ‘toxic nature’. ‘Not any more’, I told myself. Since that day I took on a mission to change myself.

Once again I started painting, took up a music lesson class, since I loved to sing. During this journey of self-realization, I met a lot of wonderful people, interacted with them and finally made some ‘real friends’.

2) I Began To Work Out Regularly

Although medication is almost always prescribed but that does not really heal. Working out is a better option. It releases endorphins which help realize better satisfaction and feel happiness.

It won’t be easy to shift to an altogether new lifestyle, and chances are that you may give up as fast as you started. So, you have to make this your priority and give it the utmost importance.

Check out various routines to see which one excites you the most and you never want to miss a class or a session.

3) I Gave Up Seeking Negative Attention.

My toxicity brought me closer to toxic people only. My relationships never lasted long and were full of fights, arguments and misunderstandings.

I lost so many friends, but I didn’t care because that helped me attract attention.

4) I Realized My Mistakes And Apologized.

I had made innumerable mistakes and hurt many people. Realizing mistakes and apologizing to those I had hurt after months and even years had elapsed as difficult, but rewarding. It helped me to heal. The kindness, with which people forgave me, was surprising. Maybe our relationships were over, but they accepted my apologies, and that rid me of the burden I was carrying for years.

Start now, accept your mistakes and make a new beginning.